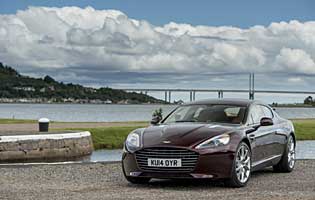 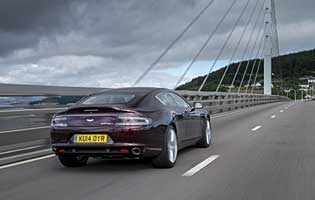 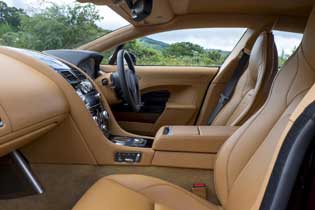 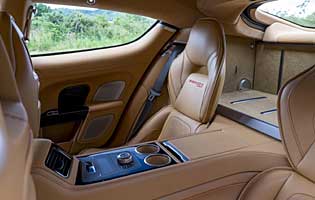 Aston Martin's one and only four door model the Rapide S is arguably the firm's current flagship, being its most luxurious model as well as one of the fastest. To keep pace with an increasing number of rivals in this super-luxury GT sector Aston has substantially revised the car, with impressive improvements in the driving experience as a result.

Aston Martin has been reborn as brand, marked by the introduction of the Vantage V8 in 2005. A strong family design followed with the DB9 and the Rapide arrived as a spin-off from that model. It was the first four-door model to come from the British firm since the ill-fated Lagonda of the 1980s, but it indicated the expansion of the brand and the need for Aston buyers to carry more than two people on a regular basis.

The first revision of the Rapide came in the shape of the Rapide S which added a new nose design and a more powerful engine behind it, but that has now been superseded by an updated Rapide S. Based on the revised DB9, the latest Rapide S chiefly benefits from the latest mechanical tweaks to release yet more power from the magnificent 6.0-litre V12 engine.

Another key mechanical upgrade is the adoption of a new eight-speed automatic gearbox. Recognising that the Rapide S is likely to be used for long-distance travel possibly more than any other, it offers significant improvements in both shift quality and vehicle performance; Aston Martin claims the Rapide S can now exceed 200mph for the first time, making it one of very few four-seaters capable of such a feat.

The rear contains two full size sport seats meaning the Rapide can comfortably transport four adults with bucket seats employed to seat the passengers in the same upright, highly supported position as the driver. Separate air conditioning, seat heating and cooling and the option of video entertainment increase the comfort levels in the rear. Further back, a large boot holds plenty of potential for luggage with the ability to fold the rear seats and increase the available space.

Our verdict on the Aston Martin Rapide Rapide S 2015

The Rapide S was already a very alluring machine and the recent revisions have only boosted its appeal. The new transmission is smoother and more efficient, making the car easy to drive in all conditions. The visual changes are minor but enhance its looks still further, while the dynamics blend comfort and performance very well. The Rapide S requires a heavy financial investment but the rewards are sufficient to justify the price.

The Aston Martin Rapide S is an expensive vehicle to purchase and run. Fuel consumption is heavy, specially developed tyres will prove costly to replace and insurance premiums will be at the top end of the scale. The prestigious badge should mean strong residuals, though.

The Rapide's rear is not as spacious as that of a traditional large saloon, but is considerably roomier than that of a traditional two-plus-two coupe. Leg and headroom will suffice for all but exceptionally tall passengers. Longer journeys may take their toll on rear seat occupying adults to the confinement, but the Rapide can comfortably be called a true four-seater. A surprisingly spacious boot includes a useful divider to keep smaller items out of the passenger space and the rear seats fold to offer even more room for luggage.

Elegantly styled and lit dials greet the driver; they are easy to read and aided by a digital display that offers a speed readout. The Rapide's controls adhere to convention and are instinctive to use. The steering is on the heavy side but remains perfectly manageable around town, while the centrally mounted controls are clearly labelled and well laid out. The traditional fly-off handbrake has thankfully been replaced by an automatic, push button operated system.

Overall comfort is helped by the fact the two rear seats follow the lead of the front seats as sports-style bucket examples, so passengers sit in an upright, driving-like position. This is surprisingly comfortable however, and offers excellent support meaning passengers strain less through the bends. All four seats are both heated and cooled with air-conditioned air, and interior refinement is excellent.

The hatchback layout automatically lends itself to security, with possessions easily concealed in the boot. Naturally an alarm and immobiliser is standard, but volumetric system with tilt sensor is an optional upgrade. UK models also come equipped with a tracking device as standard.

The updates for the latest Rapide S may seem minor but they have a significant impact on the driving experience. The new transmission makes the most of the superb V12 engine, so that cruising is even more comfortable and refined while also making it easier to exploit the superb performance. The ride quality is also improved without harming the highly impressive handling, particularly for such a big car.

For a family of four, with two young children, the Aston Martin Rapide could comfortably pass muster as a family vehicle, assuming expense was not an issue. High quality materials may suffer at the hands of young occupants, but they will certainly be comfortable and potentially well entertained.

The size, performance and expense of the Rapide S means it is entirely unsuitable as a first car.

One of the most desirable badges in the world, any new Aston Martin benefits from the excellent reputation forged by its predecessors. As the first four-door model from the Gaydon-based manufacturer in decades, the Rapide carries extra prestige. The hand-made nature of all Aston Martins means that although each model is unique, they are impeccably crafted.

With a similar low-slung seating position to the Vantage and DB9 front and rear, accessing the Rapide is not as easy as accessing a typical four-door saloon. Much has been done to ease the process, however, including clever 'swan wing' door design that allow them to open up and out.. Despite this, the rear portal remains relatively tight, with the seat positioned behind a large metal shoulder. This means some dexterity is required, particularly when exiting.

Standard equipment includes an exceptionally high-quality Bang and Olufsen BeoSound audio system with radio, CD and speaker sensors that rise from the dash top. Full compatibility with an iPod is standard and a USB input is also included. The sat-nav system is not as sophisticated as rival offerings but does a decent job, while rear seat passengers can enjoy an optional twin screen entertainment system for the rear includes a six-disc DVD player and wireless headphones.

A wider range of exterior colours and interior trims are available on the revised Rapide S, and Aston claims it has the most personalisation options of any of its models. Although more lurid shades are available the Rapide looks most dignified in dark metallic shades. On the inside the trim is of a very high quality, with leather, Alcantara, carbonfibre and aluminium in abundance.

The good news is that parking sensors are standard front and rear, as the low driving position and relatively limited rear visibility. Manoeuvrability is reasonably impressive for a large vehicle, but the Rapide requires caution when reversing into a tight spot.