The Volante is the visual equal of the Coupe 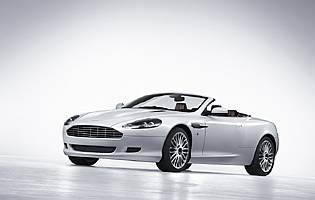 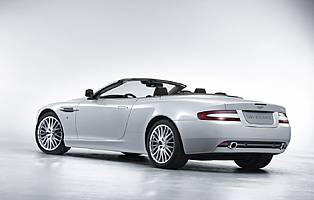 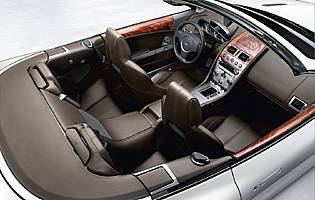 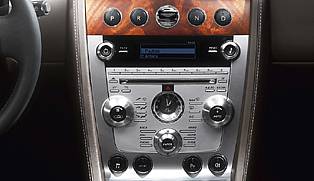 A distinctly modern vehicle, but with one eye firmly on the past, the DB9 is an achingly beautiful and strikingly powerful GT from that most British of manufacturer's, Aston Martin. The Volante is the convertible variant, with a folding soft top roof that adds to the versatility but detracts nothing from the looks.

Few cars at any price can match the visual drama of the DB9. Its exterior design is an impressive blend of classic Aston Martin details but with a thoroughly modern feel. It manages to hint at the past without slavishly copying it and its handsome curves and proportions give it a presence which is hard to ignore.

Convertible fans consider the DB9 Volante to be one of the few cars that is as attractive as a drop-top as it is in coupe form. The DB9 Volante cuts a highly appealing profile with the fabric roof up, but with the roof down is one of the finest looking vehicles on the road with kerbside appeal that's off the scale.

It is as impressive under the skin. Power is provided through a refined but highly vocal six-litre V12 engine, revised to deliver 470bhp to the rear wheels. The core of the car is constructed entirely from aluminium, using high-tech bonding rather than riveting for lightness and strength. The bodyshell is also a mix of aluminium and composite panels, for strength and weight saving.

Chassis rigidity often suffers as a result of removing the roof and, to prevent this, Aston Martin has increased the torsional rigidity of the DB9 Volante chassis by ten per cent, as well as revising the suspension settings and components. Exterior design upgrades have been limited to a change in wing mirrors - a reflection of the model's peerless visual appeal - and inside the old Volvo-style key is replaced with a glass push-start example, more befitting of the car's price and status.

Our verdict on the Aston Martin DB9 Volante

The DB9 Volante competes in a highly exclusive sector inhabited by some of the finest marques in motoring, but it can compete on all fronts. In convertible form it retains the exquisite design, thrilling performance and sumptuous cabin of the coupe and, although inevitably its price makes it very exclusive, the lucky few will not be disappointed.

Running costs for the DB9 will be very high indeed. The purchase price, fuel consumption and insurance are all at the top end of the scale, making it a car for the well-heeled only.

The DB9 is relatively restricted in terms of space, particularly given its size, although most importantly front seat passengers are well catered for. Rear seat occupants will not be comfortable on longer journeys, but the fact that the folding roof does not impinge on boot space is a real bonus, particularly given the DB9 Volante's touring status.

The layout of the DB9 is logical and easy to use as well as very attractive. The gorgeous flood-lit instruments and clear digital displays speak volumes about the quality of the car as a whole and make it a particularly pleasant vehicle to travel in at night. The button layout is sensible and clear, with buttons on the back of the steering wheel that can be used to control the satellite navigation. The unusual location of the gear selection buttons on the centre console is a smart idea and frees up space in the centre divide, too. The roof is lowered automatically using a single button operation. It takes just 17 seconds.

Although the ride is sporty and firm, the DB9 can delivers extremely high levels of comfort. The ride copes admirably with rougher surfaces and with the roof up the model is extremely refined. Road and wind noise are well disguised and at a cruise the engine settles down to a discreet rumble. The seats are also very good, with full electric adjustment to attain an excellent driving position. The rear seats are lacking in comfort however. Designed for occasional use, only the shortest of occupants will be able to make use of them.

With an immensely strong chassis the DB9 offers a high level of passive safety, while the high performance brakes and suspension, combined with a standard stability control system promise an equally high level of active safety. Traction control can easily be provoked, but is not intrusive. In the Volante, roll-over hoops are ejected should the car be involved in an accident.

Befitting a car of this price and exclusivity, the DB9 comes with an alarm and immobiliser as standard. This can be upgraded to include a tilt and intrusion sensor, while a tracking device is also on the options list.

Like the Coupe, the real pleasure of a DB9 Volante comes with the driving. The 6.0-litre V12 engine delivers effortless performance. Any gear at any speed produces purposeful acceleration. In full auto mode progress remains smooth, but using the paddles to wring out the performance is a truly phenomenal experience and the quoted top speed in excess of 185mph feels easily attainable. The first generation of DB9 Volante received criticism for a flexible chassis that dampened driving pleasure. The revised version features a stiffer assembly with changes to the suspension components, making the car more rewarding to drive. Although a little more flexible than the Coupe, the Volante is still leagues ahead of all but a few soft-tops in terms of driving pleasure. .

The DB9's family appeal is limited by its small rear seats - only the smallest child seats will fit and the boot is insufficient to carry large amounts of luggage.

The DB9 Volante is much too expensive and powerful to suit even the richest first time car buyer.

The DB9 is right at the top of the quality tree, with clear attention to detail and high quality materials throughout. The end result is a car that is a pleasure to operate, right down to switches on the dashboard or opening the boot. The same can be said for the DB9's image, which is close to peerless. The combination of a famous back catalogue of fine performance cars alongside a highly successful racing heritage and cinematic appearances make it one of the most desirable cars money can buy. Unlike the more affordable V8 Vantage, the DB9 remains an exclusive vehicle.

A svelte coupe of this height should be difficult to get into, but the clever arrangement of the doors, which open out and upwards, makes getting into the front surprisingly easy. Rear seat passengers will find it considerably more difficult to get in, even though the front seats slide forward. Obviously, it's easier without the roof in place.

All DB9 models are fitted with a premium audio system as standard, with a powerful 700W amplifier and a dedicated iPod connector. Steering wheel controls allow easy operation and the sound quality is exceptional, regardless of the input device.

The DB9's cabin can be customised to a large degree, with a choice of wood or metal finishes to the dashboard. In any configuration it is a beautiful design, with the highest quality materials and first class construction throughout. Every part of the cabin is finished with a flourish.

Given its low slung driving position and lack of conventional bumpers, parking the DB9 can be a little taxing. The folding roof obstructs the view to the rear considerably but, even with the roof down, the hunched shoulders restrict observation. However, the light steering and standard rear parking sensors do help.

BMW M6 Convertible Superb performance, styling not to all tastes