Exterior design is functional above all else 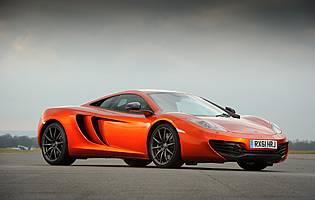 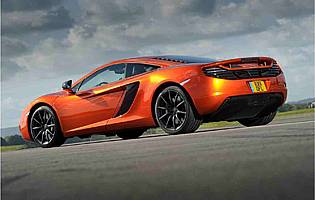 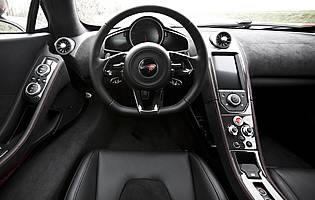 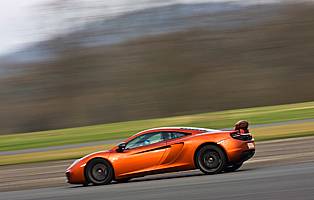 A company known almost entirely for its Formula 1 expertise turning its hand to road-car building is certainly a cause for interest, especially when that company is McLaren. With its only previous road car being the record-busting McLaren F1, the new MP4-12C has huge shoes to fill as well as competing in a fierce market alongside some of its grid rivals.

The McLaren F1 appeared in 1994 and sold for a spectacular GBP634,500, thanks to a compromise-free approach that included a carbonfibre chassis and an engine bay lined with gold leaf, as well as a record-breaking top speed of 240mph. Nearly 20 years later the MP4-12C is designed to inhabit lower echelons of the supercar world, but in a field that is just as competitive and inhabited by manufactures with glorious road car back catalogues.

The starting point for the MP4-12C is the carbonfibre Mono Cell. Just as with the hugely expensive F1 this is a carbonfibre chassis, but developments in the intervening years have allowed McLaren to produce this as vastly reduced cost and improved performance, giving a super-strong and ultra-lightweight frame for the car's core.

The rest of the car is just as highly sophisticated. A brand-new twin-turbocharged V8 engine was developed specifically for the MP4, as was the seven-speed dual-clutch paddleshift transmission. The suspension does without roll bars and instead has electronically activated Active Roll control, while systems such as Brake Steer and active aerodynamics are all designed to maximise the car's performance and handling.

There is huge attention to detail and uncompromising design throughout the car. There is an automatic air brake, hexagonal wiring that saves weight over the conventional circular type and the option to have a lightweight package including wheels, body panels and a carbon ceramic braking system. McLaren also offer a bespoke service which they claim can meet almost any requirement from a customer.

Even looking beyond the cache of a name like McLaren, the MP4-12C is a remarkable achievement. As a driving machine it is hugely capable and immensely satisfying, yet it has a benign nature that makes it so simple to use in ordinary driving. The final element is the exceptional detail of engineering which should also make it a pleasure to own.

A car of this nature is never going to be cheap to purchase, insure or fuel, but at the very least the McLaren is capable of respectable economy for its performance when driven with some restraint. Other than this there's no way around the fact that it is a substantial financial commitment.

For the front seat occupants there is a good deal of space on offer, with head and legroom to spare for even the tallest drivers. Luggage space is relatively limited however, although there is some additional space behind the seats.

Climbing inside the McLaren it is hard to see where all the controls are, such is the uncluttered nature of the fascia. Many of the car's minor functions are accommodated by the touch screen in the centre console, which is more like a mobile phone screen and is intuitive and accurate when used. The instrument pack is also clear and easy to use with a number of configurable settings to display the required information.

Comfort can often be a secondary factor for cars of this nature but clearly attention has been paid to making the McLaren refined but not dull. In the softest suspension setting the MP4 rides very well, bumps are felt but do not disturb and noise levels are well controlled.

You would expect to have an alarm and immobiliser as standard on the MP4, but there is an upgraded system with a volumetric sensor (allowing you to leave windows open) as well as the option of a tracking system should the vehicle be stolen.

With such a strong core made of carbonfibre, huge grip reserves and enormously powerful brakes, the MP4 is undoubtedly a safe car. In addition to this the driver aids such as Brake Steer are very clever and allow the driver to extract maximum performance from the car without making them feel like the car is doing all the work.

In the supercar stakes the MP4 has all the right credentials; the combination of the hugely powerful and flexible turbocharged engine combined with the super-slick gearbox gives it mighty performance. It accelerates brutally from low speed and continues to do so well over 100mph. The brakes are very strong, even with the standard steel discs opposed to the carbon ceramic option, the handling is incredibly balanced and benign as well as involving. The flip side of this ultimate performance is that the MP4 is not a demanding car to drive in normal road conditions, and with the systems all turned to their softest setting it is possible to forget you are driving a car capable of over 200mph.

With only two seats the McLaren is not really suitable for family duties. The limited boot space makes carrying a buggy out of the question, although a child's car seat would probably fit quite happily next to the driver.

Although it is impressively easy to drive given the performance, even a Lotter-winning new driver would do well to steer clear of a new McLaren as their first car.

Any car at this price point should be of high quality, but the McLaren should exceed expectations with its remarkable attention to detail. Inside and out it looks and feels like a perfectly executed piece of design. Image is not something that the MP4 will struggle with either; the link with Formula 1 is impossible to ignore and gives it enormous cache, as well as the legendary F1 road car before it.

The MP4 is a strict two-seater, and the front doors operate on a front hinge so they open upwards and move well out of the way. Closing them again from the inside might require more than one attempt as you get used to the action required. But with the doors so far out of the way it is easy to climb aboard and get comfortable. With the main load space being between the front wheels it is also easy to access the boot.

Unsurprisingly for a high specification car of this nature, the MP4 has a bespoke audio system fitted as standard which includes a 32Gb hard drive, tuner, Bluetooth and USB/auxiliary input. All operated through a simple and intuitive touch screen in the centre of the facia, it is easy to understand and operate and requires minimal effort from the driver.

The totally bespoke nature of the McLaren inside and out allows the customer complete freedom of choice, but in terms of off the shelf options, the exterior manages to pull off subtle metallic shades as well as more vivid hues. Inside the default options mix carbonfibre and leather trim, giving a dark background with the occasional flash of colour.