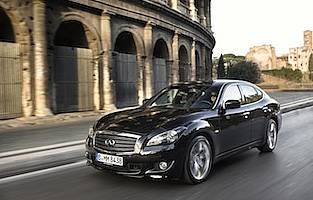 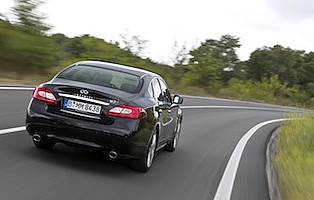 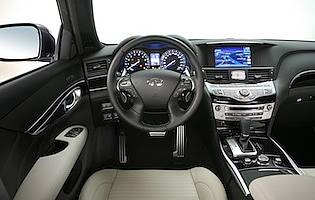 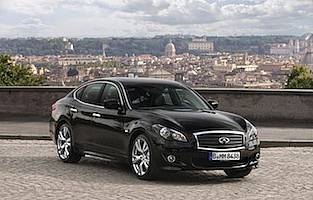 It's not very often that an all-new player enters the premium saloon market. Lexus was the last big name to try its hand, and the Toyota's luxury arm has remained a small operator over two decades later. Nissan hopes that its Infiniti operation can be more successful. In its favour is a wider choice of vehicles, including its 'M' executive saloon.

On paper the M saloon offers the same basic features as cars from the likes of Mercedes, Jaguar, Audi and BMW. The car boasts rear-wheel drive and a choice between petrol and diesel engines. Infiniti's offering goes further with a generous level of standard equipment, hi-tech safety systems and the firm's renowned focus on customer service.

In a market where so many of the cars are close in terms of overall performance, Infiniti hopes its M saloon can be more attractive in terms of its looks and the simple fact that it won't be as common a sight as most rivals. The company is also keen to promote this sense of exclusivity though its modest network of dealers.

The attitude towards service is more akin to that of a boutique hotel than a car dealer. With a concierge-style attention to service and detail, customers are not subjected to the high-pressure sales techniques more commonly associated with the car buying process.

Looks aside, Infiniti's M saloon is pitched at a younger than average audience for executive cars, while its sporty bias puts it closer to BMW's 5 Series and Jaguar's XF than Lexus' GS. Emissions-wise the diesel variant isn't as competitive as some rivals, but Infinity believes the car's overall value balances out the car's higher tax band.

Our verdict on the Infiniti M M30d GT Premium

Attempting to break the European stranglehold of the executive saloon market, Infiniti and its M saloon offers something a little different for buyers willing to look elsewhere. Demonstrating a polished and enjoyable driving experience, ample comfort and safety equipment, handsome styling and a thoughtful aftersales experience, only Infiniti's modest dealer network and lack of brand heritage could prove a stumbling block for some buyers.

Competitively priced, thanks in part to Infiniti's need to raise awareness in light of the more established competition, and laden with a generous level of standard equipment, the M is an attractive proposition. In diesel trim it can't match its rivals when it comes to CO2 ratings and the associated tax bands, but the car's asking price should go some way to compensating for this.

Unusually for a premium saloon, Infiniti's M offers rear seat occupants an above average amount of legroom. Headroom fore and aft is also generous, as is the space available to front seat occupants. And with plenty of cabin oddment storage options plus a good-size boot, passengers are well catered for.

Clear and intuitive main controls are supported by a large central touchscreen display. Minor controls are not always as easy to locate, however. Navigating around the touchscreen can take time, as it plays host to many different functions and menu system is a detailed one.

With its plush but supportive seats and ample cabin space, it's hard to find fault with the M. Road, wind and engine noise are all heavily suppressed, adding to the cabin's premium ambience.

As you would expect, the M comes with the usual array of security measures - immobiliser, remote central locking - to keep the car out of the wrong hands. One added bonus is keyless ignition, which should stop you from fumbling for the key in the dark.

Infiniti builds on the M's numerous airbags dotted around the cabin plus the usual array of electronic traction and stability aids with lane departure warning, an active braking system - brings the car to a controlled stop - and a rear-wheel steer feature. The latter improves agility and can improve safety when taking evasive action at speed.

Infiniti's M promises a sensible balance of refinement plus enough performance to appeal to keen drivers, and on the whole the car succeeds. A rear-wheel drive car like many of its rivals, the M delivers a rounded and assured performance on a variety of roads. With switchable electronic damping plus, for S models, agility-boosting rear-wheel steer, the M is not you average, conservative Japanese saloon. The car's 3.7-litre V6 petrol motor affords the M a good turn of speed, although the more frugal diesel is just as good in the real world.

Although spacious for a car in its class, with the presence of plush leather in the cabin the M is not really a family car. It's got a practical and good-size boot, but a teenage or older family demographic is probably better suited to the Infiniti's abilities.

Infiniti's M saloon is hardly the ideal car for the first time driver, but that's not to say it isn't easy to drive. Boasting plenty of steering assistance, lots of driver aids and an auto gearbox, if you had to drive one you wouldn't feel all at sea. It's a potent car though, and on attracting premium-level running costs.

Although a relatively unknown marque in Europe, in the US Infiniti has been around for some time. Respected for its upscale, premium appeal and competitive pricing, Nissan's upmarket division has much in common with Lexus - Toyota's luxury arm. Infiniti differs from Lexus by offering a sportier driving experience, bolder styling and a higher level of innovative technology.

Being a premium saloon, access to the front seats is straightforward. You do sit a little lower than some cars, though. The situation is better than expected at the rear, with an above average amount of rear legroom making access and egress easy even for adults. At the back the M's boot can be opened remotely, revealing a good size load aperture.

There's no such thing as a standard audio unit here, as Infiniti sells the M with a feature-packed infotainment system. With its large, colour touchscreen providing the main focus, audio performance is excellent along with the ability to connect an MP3 player. Satellite navigation, phone connectivity plus upgraded amplification make it hard not to be impressed.

Like every other executive car on the planet, Infiniti's M model looks its best when chosen in a dark, subdued exterior colour. Lighter hues better show off the car's curves but do little to imply a sense of premium value. It's the same inside, as light coloured leather and trim materials don't impart the same high value ambience as dark materials.

In reality the M is no bigger than your average European premium saloon. With light and accurate steering and good all-round visibility parking is straightforward. Infiniti adds assistance in the shape of traditional parking sensors plus a camera system capable of delivering an all-round view for added peace of mind.