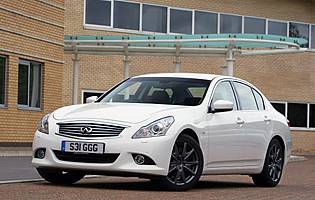 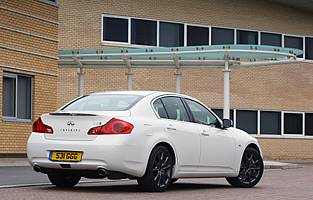 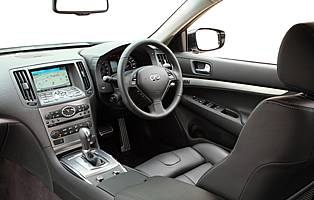 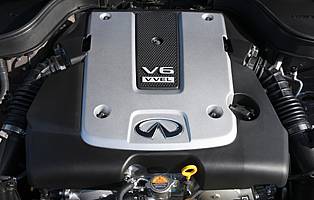 The core model within the expanding range of vehicles from premium Japanese manufacturer Infiniti, the G line-up has been given a boost with the arrival of the G37x saloon model, designed to compete against four-wheel drive performance models in the executive saloon sector.

Infiniti may be a relatively new brand to the UK, but it is wasting no time in making its presence felt with a range of model variant introductions to increase the appeal of the brand for economy and performance minded drivers. The new G37x Saloon is certainly aimed at the latter, with the focus on improving the driving appeal and versatility of the executive saloon model which shares lineage with the Coupe and Convertible G37 models.

Combining a 3.7-litre V6 engine familiar from the Nissan 370Z, albeit in a slightly detuned form, with an advanced four-wheel drive system developed from the Nissan GT-R and limited slip differential has allowed the already potent G37 model to take on performance rivals from established premium manufacturers. The model uses a seven-speed automatic transmission to drive the rear-biased chassis, with sequential paddle-shifters to override the automatic setting.

A new Premium specification has also been added to the line-up with comes complete with an updated version of the multimedia entertainment system called Connectiviti+. Featuring and advanced sat-nav system, a Bose 11-speaker sound system, reversing camera and Intelligent Cruise Control capable of bring the car to a complete stop, the new models are noticeably well equipped.

Vying for sales in the ultra-competitive compact saloon segment against the established German models, the G37x strives to offer a luxurious feel inside, with good quality leather, a choice of metal or wood interior trim and details such as a centrally-mounted analogue clock.

Our verdict on the Infiniti G G37x GT Premium Saloon

As an all-round package the Infiniti G37x is hard to fault. Strong performance, good road manners and a comfortable interior are all present, although it fails to be the stand-out model in any one area. Its current lack of reputation can be either a positive or a negative in the competitive executive saloon segment, depending on how buyers approach it.

With the large engine and permanent four-wheel drive, fuel consumption is likely to be the main cost associated with ownership of the particular model. Insurance is likely to be on the expensive side because of the still exclusive nature of the brand. Compared to similarly powerful rivals, the G37x's purchase price is competitive.

Considering the bulkiness of the exterior, the Infiniti G37x's saloon is not as big as might be expected. That said, rear leg and headroom is acceptable for the sector. The saloon boot is not as practical as a hatchback or estate design, but still offers a respectable load space and a good size aperture. Rear seats do not fold, but a ski hatch and cover is present.

With the exception of the floor-mounted parking brake the Infiniti G37x's control and layout is traditional but ergonomically and stylishly executed. The only small bug-bear is the angled positioning of the navigation controls beneath the central screen. Large luxurious paddle shifts have a quality feel as do the gear selector and the minor controls and buttons. The white on black dials are particularly clear and soft backlighting around the dash and centre console comes to the fore at night.

The Infiniti G37x's suspension offers just the right blend of comfort and performance, with an excellent motorway ride, impressive bump suppression and a firm enough stance to limit body roll. The leather lined and well-equipped interior features dual-zone climate control for front passengers and air vents for the rear seats. All-four windows feature one-touch operation and the seats are very welcoming. The powerful engine is not as refined as some rivals however, and refinement suffers when it is revved hard, although the engine and exhaust notes are very pleasing.

Four-wheel drive brings its own benefits, especially a rear-biased system that retains nimble handling, but the usual crash safety cell structure is present within the G37x along with a full compliment of airbags. Adaptive cruise control provides additional safety on long motorway journeys and its radar also senses when the vehicle approaches another too quickly, emitting an audible warning to alert the driver.

The combination of a 3.7-litre V6 engine and seven-speed automatic transmission makes the G37x saloon an accomplished cruiser, with plenty of power available for swift overtaking when required. Equipped with four-wheel drive it's also a capable sports car, with excellent grip and a rear-biased chassis that allows for responsive and agile handling and cornering. Paddle shifts for the gearbox further the sports appeal and although the transmission can be a little slow to respond at high revs it's a rewarding car to drive, aided by direct and ideally weighted steering.

There's little reason why the G37x saloon could not serve as a family vehicle as well as executive car. The addition of four-wheel drive puts the focus on performance, but also pays-off in terms of safety - a key factor for parents. Running costs will not suit tighter family budgets, however.

As a high performance, premium executive saloon, the Infiniti G37x holds little appeal as a first car purchase and is not suited to inexperienced drivers.

Although the interior doesn't feel quite as special as some rivals, there's little doubting the precision with which it has been built and material quality is suitably luxurious for a premium car. Attention to detail in elements such as interior lighting is also evident. New to the UK, the Infiniti brand has yet to secure any real prestige or reputation, although its little known status does give it an element of exclusivity.

Four well-proportioned doors and welcoming seats offer no issues when it comes to accessibility. A traditional saloon boot offers a reasonable aperture to the rear.

Eight exterior colour options including a new shade of dark grey are available and, unusually for an executive saloon, the G37x looks smart in lighter shades particularly white. Dark paint options for the alloy wheels also help give the model a sporty appeal. Wood interior trim can be specified for a more classical look, but the aluminium trim is smart and modern. Scratch shield paint heals itself of small marks and scratches, which is a useful feature.

The G37x saloon feels like a large car at the wheel but its comprehensive parking system with reversing camera, graphic display and audible warnings makes it a cinch to park regardless. The four-wheel drive system has little impact on the reasonable turning circle and visibility is respectable for a saloon model.

Audi A4 S4 variant is among closest rivals

BMW 3-Series 335i is rapid and nimble