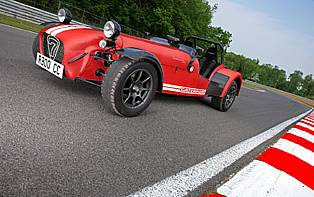 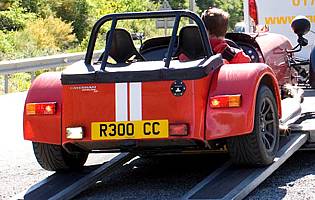 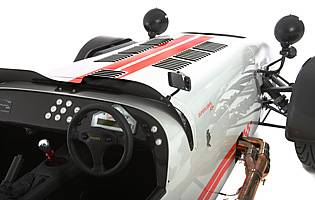 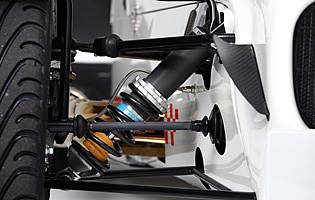 Caterham's previous generation R 300 model was the company's best selling model thanks to a well-balanced combination of performance and good road manners. The new version builds on those principles, offering a more sedate take on the performance provided by the more powerful R 400 and R 500 models.

Caterham's Superlight models, as the name suggests, use weight-saving materials to improve the on-road performance of the tiny, pared-down two-seater sports cars. Despite being the least powerful of the three Superlight R models, the R 300 still boasts a power-to-weight ratio of 339bhp per tonne - enough to shame vastly more expensive supercars. It achieves this through the combination of a 175bhp, two-litre, four-cylinder Ford engine and a body that weighs a mere 515kg.

Much of that weight-saving is achieved using carbon fibre as with the range topping R 500 variant. The front wheel-arches and the dashboard assembly are composed of the lightweight material. The composite shell seats are also extremely light. The chassis itself retains its perfectly balanced and highly adjustable nature, providing the driver with a responsive and nimble driving experience similar to that of the more powerful variants, only more manageable thanks to the power decrease.

Also inherited from the R 500 and R 400 models is the slick new instrument panel with flush fitted controls that are more stylish than elsewhere in the Caterham range. The open top format comes without doors or a roof, although a windscreen can be applied for regular road use increasing the refinement and a clip on canvas roof provides some protection form the elements. It remains a visceral experience to drive, however, with zero sound isolation in terms of wind, road and transmission noise.

A compact interior seats two with room for a bare minimum of luggage. Even with a sole occupant the interior still feels tight, adding to the race car-like experience. Still a very specialist model, the R 300 is intended to offer a more subtle experience on road, making it a delight to drive quickly on a twisty B-road.

Our verdict on the Caterham Superlight R 300

The marginally scaled down performance of the Caterham Superlight R 300 achieves its goals by doing little to detract from the driving experience while making the model easier to live with on the road. As a result, many drivers will actually find its breathtaking yet useable performance more fun than the outright grunt of the more powerful models. The usual sacrifices have to be made in terms of space and practicality, but they remain well worth it.

Space is at a premium for driver and passenger in the R 300. For those over 6ft tall, an SV model can be specified with a larger chassis at extra cost, but the standard version hugs the figure when inside. Room for the upper body is acceptable if the lone occupant; elbow room for vigorous driving is lacking if carrying a passenger. Legs are squeezed by the transmission tunnel and the footwell is tiny - chunky trainers will make working the pedals frustrating. A tiny boot is present - it will accept a couple of small bags alongside the roof and tonneau cover.

The carbon-fibre dashboard contains only the essential gauges and equipment. A gear shift indicator is a useful addition and the rev-counter and speedometer are ideally positioned. Less so the fuel gauge, which is on the passenger side and can be difficult to read from the driver's seat. The push button indicators do not self cancel and are thankfully accompanied by a loud beep. The rest of the function such as wipers and lights are controlled using stylish and easy to reach centrally mounted buttons. The steering wheel can be easily removed to aid access and the gear lever is perfectly positioned.

Clearly, the R 300 is not built for comfort, but it is less racey than its R 400 and R 500 counterparts, making it easier to live with day-to-day. With the screen in place the wind is thankfully kept out of the occupants' faces and a popper-fastened canvas roof keeps the rain off in an emergency, although it takes time to deploy. The ride is very firm but not entirely unforgiving. Although the light-weight seats are thin and hard, they're sculpted to be comfortable over longer journeys.

Given the lack of doors or a permanent roof, security is something of an issue. Even with the canvas covering in place, doors are only latched with poppers. Fortunately an engine immobiliser is standard. Keyless ignition requires the fob to be present for the starter button to engage. The removable steering wheel adds additional security, but the optional battery cut off switch may prove useful for security conscious.

Although the Superlight is a minimalist car, Caterham has included aluminium honeycomb sections to give crush space, while the superior visibility and incredible dynamics mean it has the ability to avoid potential accidents better than survive them. Strong four-point harnesses are fiddly but sensible. Electronic aids such as ABS or ESP are not present.

The R 300 offers the performance and handling of a racing car in a package that is tractable on the road. With such a light body, the 175bhp delivered progressively by the throaty Ford Duratec engine is made to go a long way, offering acceleration that's on par with a powerful supercar. The harder the engine is revved the more pleasure ensues, and useful shift-change lights above the tiny steering wheel prevent over-stressing the unit. The driving position can leave you feeling a little vulnerable, but allows the driver to fully exploit the nimble handling and super-responsive chassis. The gear change is short and sharp and the brakes progressive and capable of biting very hard. Traction through corners is hugely impressive, but the powerful engine can easily spin the wheels, at which point drivers will appreciate the responsive and easily controlled chassis.

Children may well love the thrill of being driven in the Superlight R 300, but parents will be hard pushed to find a vehicle less suitable for family duties. Only children old enough to not require a safety or booster seat would be able to sit alongside the driver.

Despite being designed to be more manageable than its more powerful siblings, the Caterham Superlight R 300 still requires a high degree of confidence and a reasonable amount of experience thanks to tremendous performance and its responsive nature. Less experienced drivers would mostly find it a frightening experience. Insurance costs would also likely rule out younger drivers.

The R 300's standard of fit and finish is impressive and the quality is improved through the use of more expensive materials than elsewhere in the range. The raw nature of the vehicle, complete lack of isolation and firm suspension mean it does buzz and rattle but this is to be expected. Being hand built, individual models will have individual idiosyncrasies and reliability is not impeccable - all Caterham models are likely to receive more abuse than any normal car leading to greater wear and tear and the occasional failure. One thing is for sure, the R 300 will not fail to turn heads.

With no doors or roof, initial access to the Superlight is easy, but the very low seating position and narrow footwells require passengers to slide down into the seats, making awkward even for smaller drivers. With the roof in place the steering wheel will have to be removed - a quick release function makes this simple - in order to get into the driver's seat.

The Superlight R 300 is not fitted with any form of audio system.

Considering the focussed nature of the Caterham range the colour palette available is surprisingly varied, with an array of base, metallic and special paint schemes to choose from. Despite the model's limited bodywork it's quite susceptible to colour choice, so it's worth investigating the options. The carbon trim on the Superlight R 300 is standard as are carbon fibre wheel-arches and dashboard. The shell seats benefit from a thin covering of black fabric, too.

Without the optional pop-on canvas roof in place, the R 300 is among the easiest of cars to park thanks to a complete lack of blind spots and the ability to see both the front and rear wheels. Its tiny dimensions are also a benefit. It does boast a very poor turning circle however, and the unassisted steering is heavy at low speeds.