Vibrant orange paintwork is one of three unique colours 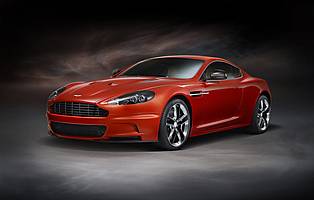 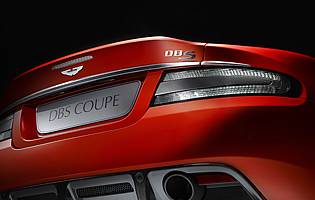 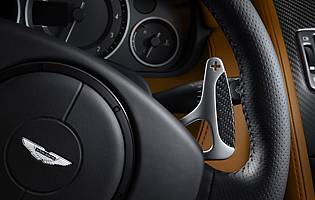 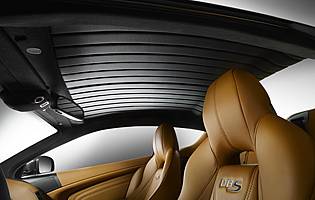 Already one of the world's most desirable cars, Aston Martin has added extra appeal to the DBS model by introducing the Carbon Edition. A series of specification enhancements distinguish it from the regular DBS alongside model-wide upgrades designed to maintain its position as the ultimate Grand Tourer.

Despite its age very few cars at any price can match the visual drama of the DBS. Its exterior design is an impressive blend of traditional Aston Martin visual cues but with a thoroughly modern feel. It manages to hint at the past without slavishly copying it, and its handsome curves and proportions give it a presence which is hard to ignore. The DBS differs from the standard car with the addition of carbon-fibre panels, different wheels and a rakish bodykit, adding to the drama.

The Carbon Edition adds yet more carbonfibre elements, including the front splitter, door mirrors and rear lights surrounds. The front grille itself is finished in black, the rear lights are smoked and the 10-spoke alloy wheels are diamond-finished in a choice of two colours. The Carbon Edition also comes in a choice of three unique exterior colours, all of which are made up of seven layers of paint with 25-hours of hand polishing for an incredible finish.

Underneath the skin, the DBS uses the same complex architecture as the V8 Vantage and Vanquish before it. The core of the car is constructed entirely from aluminium, using high-tech bonding rather than riveting for lightness and strength. The bodyshell is also a mix of aluminium and composite panels, which also brings exceptional strength and light weight. As well as benefiting performance, the strong body and frame help to boost refinement levels.

Also unique to the Carbon Edition models is an even more luxurious interior. Alongside the standard leather it has a quilted leather roof lining while the centre console is also finished in carbonfibre, hand-finished to align perfectly with the shape of the fascia.

Our verdict on the Aston Martin DB9 DBS Carbon Edition

It may be one of the more senior cars in the segment but even a short drive in the DBS Carbon Edition is enough to remind you why this car is still so desirable. The delicious interior and exterior design, hugely characterful engine combined with the faithful and communicative chassis make for an intoxicating package, yet it can still cruise and cover miles with comfortable ease.

Running costs for the DBS will be very high indeed. The purchase price, fuel consumption and insurance are all at the top end of the scale, making it a car for the well-heeled only. Unlike some of its rivals the DBS uses a large naturally-aspirated engine rather than a more efficient turbocharged unit and subsequently is thirsty regardless of how it is driven.

The DBS is relatively restricted in terms of space, particularly given its size although, most importantly, front seat passengers are well catered for. In the rear there is the option of two occasional seats although these are of limited use even for children. Alternatively there is the option of choosing extra storage space, allowing the DBS to carry significantly more luggage.

Most of the controls in the DBS remain as before, and although they are attractive to look at and to touch they can be a little fiddly to use at first; the buttons are slim with small labels and so require some acclimatisation. The satellite navigation system is much improved however, although this also uses the same ageing control system.

The DBS is inevitably more focused than the standard car. The ride, although relatively firm, copes well with lumps and bumps thanks to the strong architecture. Road and wind noise is well disguised - although more noise gets through than the standard car - and at a cruise the engine settles down to a discreet rumble. The seats are also very good, with full electric adjustment to attain an excellent driving position.

Befitting a car of this price and exclusivity, the DBS comes with an alarm and immobiliser as standard. This can be upgraded to include a tilt and intrusion sensor, while a tracking device is also on the options list.

With an immensely strong chassis the DBS offers a high level of passive safety, while the high performance brakes and suspension, combined with a standard stability control system promise an equally high level of active safety.

The DBS starts with a layout in the classic GT tradition, with a large capacity V12 engine up front taking drive to the rear wheels. Despite the huge amount of power on offer it is also pleasingly undemanding to drive at low speeds, particularly with the automatic transmission shifting gears by itself. Press the Sport button and both the engine and transmission react with greater purpose, and the full performance can be exploited. Despite its weight the DBS is a very rapid machine, accelerating hard almost regardless of the current speed while the strong brakes haul it down just as easily. The steering and suspension are beautifully judged and inspire huge confidence even in a car costing almost GBP200,000.

The DBS's family appeal is limited by its small rear seats - only the smallest child seats will fit, and the boot is insufficient to carry large amounts of luggage. Although likely to be hard-wearing, the cabin materials are far too good to be subjected to the kind of treatment that small children can dish out.

The DBS is unlikely to feature on the shopping lists of new drivers, not only because of its list price but also the insurance costs and huge performance. Even so, an inexperienced driver would cope better in the DBS than many rival cars with similarly powerful engines thanks to the smooth transmission and unintimidating driving experience.

The DBS is right at the top of the quality tree, with clear attention to detail and high quality materials throughout. The end result is a car that is a pleasure to operate, right down to switches on the dashboard or opening the boot. The same can be said for the DBS's image, which is close to peerless. The combination of a famous back catalogue of fine performance cars alongside a successful racing heritage and cinematic appearances make it one of the most desirable cars money can buy.

A svelte coupe of this height should be difficult to get into, but the clever arrangement of the doors, which open out and upwards, makes getting into the front surprisingly easy. Rear seat passengers do have to squeeze a little, even though the front seats slide forward. Access to the boot is adequate, although the aperture is relatively modest.

An updated satellite navigation system is the most important update to feature in the entire DB9 range, and it puts memories of the previous aged set up well in the past. The screen is crisp and clear, while the standard fit Bang and Olufsen audio system is the kind of high-end unit expected at this price point.

Already a cabin that is tastefully trimmed in a combination of metal and leather, the Carbon Edition adds genuine carbonfibre to the mix for an even greater sense of occasion. Beyond that there is plenty of scope for personalisation, which should make it possible for even the fussiest of buyers to find a combination they like.

Given its low-slung driving position and lack of conventional bumpers, parking the DBS can be a little taxing. However, the auto transmission and light steering at low speeds help relieve the stress as well as standard parking sensors fitted at the rear.