Despite changes the Atom is as familiar and dramatic as ever 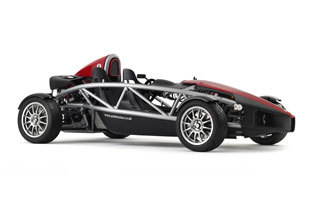 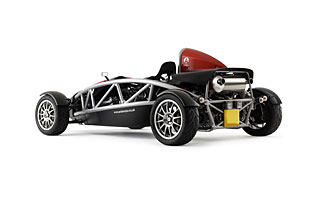 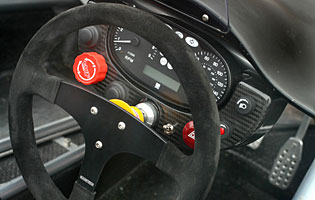 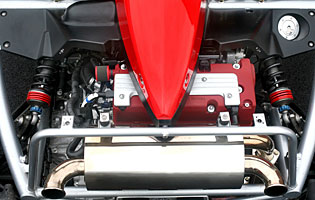 Minimalist British sports car maker Ariel have been producing the Atom since 2005 and in that time it has firmly established itself as a no-frills adrenaline machine. Its low weight, high power outputs and race-derived suspension make it a sports car in the purest sense. The Atom 3 represents the latest iteration with a number of alterations throughout.

One look at the Atom 3 won't reveal any obvious differences compared to the Atom 2: it remains an eye-catching design thanks to the exoskeletal chassis and the almost complete absence of bodywork. However the Atom's chassis has been subtly changed and is now wider by 60mm to give an increase in elbow room of 100mm. Ariel claims that every tube in the chassis has been revised.

The powertrain remains the Honda Civic Type-R unit available in naturally aspirated or supercharged forms, but it is now the latest version with includes balancer shafts to quell internal vibrations. This is particularly important in the Atom as the engine sits behind the driver and passenger with very little between them to muffle noise or vibration. The Atom also carries over the other upgrades on this engine which include a drive-by-wire throttle, a new fuel system and air intake.

As before the Atom has a race-derived suspension set up with inboard pushrod-activated dampers, while the dampers themselves are updated and now have 10-way adjustment all round. A simple knob clicks for adjustment so no specialist tools are required, and this allows the keener owner to tailor the car to their specific requirements.

The Atom 3 also sees the introduction of many more options for buyers. Although it will never be a fully enclosed car, Perspex side panels can be fitted along the flanks to increase weather protection alongside the optional windscreen. A limited slip differential can also be fitted, as well as front and rear wings for proper downforce.

The Atom was already a road car like no other and the changes brought about with the Atom 3 do nothing to lessen its impact. In fact the Atom 3 is arguably friendlier than before, with a more neutral handling balance and greater refinement from the engine. Be in no doubt however that it is a hardcore performance machine that is for enthusiasts only.

The Atom actually performs relatively well in this area. The purchase price is a relative bargain considering the performance, and the same can be said for fuel economy. Insurance costs will be high however.

Space inside the Atom is a little restricted: headroom is no problem and elbowroom is improved but it is still quite snug. The seating position is also dictated by the driver as the seats are effectively a one piece bench, passengers who are taller than the driver may struggle. There is also almost no storage space, with the only cubby being under the nose of the car and no bigger than the average glovebox.

The few controls in the Atom are fixed around the instrument binnacle, but with just a horn, ignition switch, starter button and light switches, there is not much to struggle with. The dials themselves are clear and attractive with a useful feature of the rev counter needle flashing red as the engine nears the red line.

The Atom makes almost no concessions to comfort and occupants must get used to high noise levels, a firm ride and lots of buffeting from the wind. Even though the seats are one-piece plastic items, they do offer reasonable comfort.

The Atom is fitted with an immobiliser as standard, although the absence of doors or a roof means anyone can simply climb inside. However, there is nothing to steal once inside and it would be a brave thief who tried to make a discreet getaway in one.

The Atom does without ABS, traction or stability controls or airbags, but it's design brings enormous strength while the speed of its responses and the sureness of its braking and performance bring their own safety advantages.

Once installed in the driver's seat the lack of mass is obvious in every control and the sensations it offers are heightened as a result. The steering is super-sharp and reacts to tiny inputs, the gearlever snaps quickly between ratios and the brakes are firm and responsive. In supercharged form the Atom is terrifically fast at all engine speeds and almost regardless of the gear selected - it needs respect but when driven appropriately it delivers the kind of acceleration that only top-drawer supercars and superbikes can match.

The Atom is totally unsuitable for families, although keen children will love the idea of riding in the passenger seat.

The Atom is too extreme and certainly too fast for a new driver, particularly given its rear weight bias.

Although the Atom is a minimalist machine it has a strong quality feel throughout and the high level of engineering that has gone into it is obvious. It feels sturdy, reassuring given its exposed nature, and secure on the road. The Atom's image is hard to fault with a rightly-deserved reputation as one of the world's fastest cars.

Although the Atom lacks doors and a roof the chassis spars must be negotiated to get into either of the seats and they are relatively high, requiring a leg swing and an almost inevitable loss of dignity.

The Atom is not fitted with an audio system, although a 12v socket is optional so sat-nav or compatible audio systems can be fitted and removed when the car is parked.

Despite the almost entire absence of bodywork and trim, the Atom can be highly tailored in terms of colour. The chassis can be powder coated in a huge range of colours while the composite body panels can also be painted or even covered with graphics.

With no pillars to obscure the view forward manoeuvres in the Atom are a cinch, especially as the driver and passenger can see the front wheels. However, the view behind is quite poor as the engine intake is over the driver's left shoulder and the mirrors are small. The steering lock is also relatively poor.