The Exeo ST shares a front end with the saloon 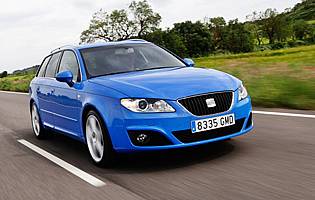 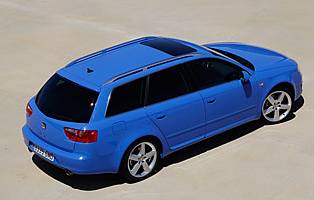 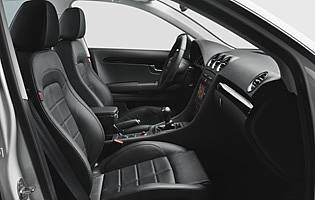 Following the launch of the Exeo saloon, Seat's first model in the big-selling D-segment, the Spanish manufacturer has unveiled the estate variant. Called the ST, or Sport Tourer, it follows the traditional path of grafting a more accommodating rear onto the existing chassis of the saloon model.

Before Seat introduced its Exeo model, it had never had a model to compete in the UK D-segment before. With private buyers, company car drivers and fleet managers paying a great deal of attention to the cars offered in that particular segment, it was not one that the Spanish manufacturer could afford to continue ignoring. With the Exeo saloon model established, it has followed the traditional path of bolstering the line-up with an estate version called the Exeo ST.

Like the saloon, the Exeo ST owes a great deal to the last generation Audi A4, a model that was as popular and good looking in estate or 'Avant' form as it was in standard saloon form. The Exeo ST's body shape is even more reminiscent of its German counterpart than that of the saloon but the same Spanish styling variations are present, including the 'arrow design' at the front, familiar Seat grille and the large Seat badge that doubles as the boot release.

Engine choices and trim levels are as with the Exeo saloon. The UK market gets less engine options than other markets within Europe, but receives the cream of the crop in the shape of a standard and high-power version of the 2.0 TDI unit and the powerful 2.0-litre turbocharged petrol unit available across the Volkswagen Group ranges. All three are tried, tested and hugely successful engines. Comfort and Sport chassis options mean the range can be tailored to suit.

Equipment levels remain generous across the four trim levels, with pared down base models available for the fleet sector and well-equipped sport models for the business or private buyer. Complemented by a variable maintenance system that can lengthen the time and distance between services, value for money remains a key ethos.

Our verdict on the Seat Exeo ST 2.0 TSI Sport

Adding further practicality to the already very attractive combination of proven drive-trains, decent equipment levels and impressive build quality, the Seat Exeo ST is sure to prove a success. Apart from a comparative lack of rear legroom and the obvious visual links to the Audi model, which may or may not be considered a negative, it is a hard car to fault. The 2.0 TSI Sport adds some welcome excitement to the mix.

As with the rest of Seat's range, the Exeo ST is deliberately priced to offer value for money within the segment. The quality has already been proven so owners can be assured of reasonable maintenance costs and even the high powered petrol engine option is reasonably fuel efficient. The engine management monitors a raft of parameters to judge when a service is due, meaning servicing costs can be lowered if the car is driven sympathetically.

Clearly, the Exeo ST has the advantage over the saloon model in terms of space and practicality. A large boot and fold-flat rear seats make the model very versatile, while the wide load bay is able to accept bulky items with ease. Lashing eyes can also be found in the boot floor. Compared to some of the newer arrivals to the D-Segment, the Exeo is less well-endowed in terms of rear legroom, but the airy rear end makes the rear bench of the ST model feel more accommodating than that of the saloon. Upfront, there's an array of smaller cubby holes clearly designed to accept objects like mobiles phones and there is also the option of a drinks cooling glovebox.

The main instrument binnacle has been borrowed from elsewhere in the Audi range, meaning it's a pre-proven design. It is no less appealing in the Exeo with a colour central screen for the trip computer that, although a little smaller than in some models, is very clear. Switch gear is laid out in a sensible fashion with no surprises and feels extremely sturdy and robust. Steering wheel mounted controls are very intuitive, too.

Despite its sporty aspirations, the Exeo still manages to offer a refined ride, an integral part of the model's inherent comfort. Interior noise is kept to a minimum with double-glazed side windows while sculpted seats, an area to which Seat paid a great deal of attention, bolster the model's comfort levels. Standard equipment includes dual-zone climate control and on the options list is a solar powered system to cool the interior in hot weather. The petrol unit is very quiet, but from the outside offers a charismatic burble.

Naturally, the Exeo ST features remote central locking and deadlocks, but it also benefits from a volumetric alarm and tilt sensor. Time delayed headlights increase personal security while double-glazed windows are extremely difficult to break. Privacy glass, standard on the Sport model, makes it difficult for thieves to catch a glimpse of any valuables inadvertently left inside.

Driver, front passenger, front side and curtain airbags are all standard equipment. Active headrests, ESP and braking assist are all present too. The Sport trim level also comes with a tyre pressure monitoring system and Bi-Xenon headlights.

The clue is in the name, and the Sport trim level does indeed boast a sportier version of the advanced, multi-link front and rear suspension setup developed for the Exeo. The model sits lower than those equipped with the Comfort suspension setup and features more complicated shock absorbers, offering some compensation for the stiffer settings. The ride is naturally firmer, but the car is considerably more responsive, aided by the speed sensitive steering. The Sport setup is standard with the 197bhp turbocharged petrol unit, which offers an impressive turn of speed. The controls are nicely tailored to a sporting approach and the six-speed manual gearbox is slick and precise.

The Exeo ST makes a fine choice as a smart and versatile family car. The rear bench will accommodate three children with ease and the seats are primed with Isofix points in anticipation. The spacious estate rear-end will accommodate luggage for a family of five with little need to resort to creative packing.

Despite being reasonably priced for the sector, the Exeo ST is still too expensive an option for the majority of young drivers. Executive models such as the Exeo are generally aimed at older drivers, while the performance nature of the Sport will incur higher insurance premiums for younger drivers.

The Exeo ST should pose few problems in terms of access, although it is marginally less convenient in this regard than some of its rivals. If less flexible, the rear doors will likely pose more of a problem than the front as they are shorter and legroom is less abundant, however a consistent roofline means there's little need to stoop on entry. The boot door is of a healthy size and configuration, posing no problems for accessing the rear.

A new, ten-speaker Bose stereo system has been designed to launch with the Exeo ST and offers sound quality that vies for best in class. Standard for the Sport trim level is an eight speaker system with impressive sound quality. Both iPod integration and integrated sat-nav are available as options and Bluetooth is a useful standard addition for business drivers.

Although it is targeting the business driver with the Exeo, Seat has opted out of the usual array of bland silvers and blacks, instead offering a more exciting range of exterior colours. Solid colours particularly suit the Sport variant with its larger alloys wheels. The vast majority of equipment and trim is recognisable from products elsewhere in the Volkswagen Group, the benefit being that it is stylish and of high quality. Materials and colour offerings vary between trim levels - the Sport models get a darker, more brooding interior with black cloth or leather and a choice of dark plastics.

Despite is extra bulk the Exeo ST is even easier to park than the saloon model as there is no boot to gauge beneath the rear window. The window itself is of a considerable size making for excellent visibility, but parking sensors are standard on the Sport model anyway. A squarely proportioned body and respectable turning circle make it easy to manoeuvre in a tight spot.