Now more streamlined, Seat's Alhambra has the looks to match its refined interior 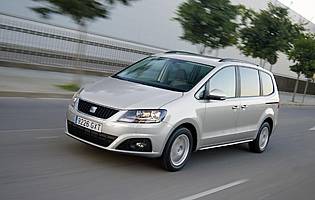 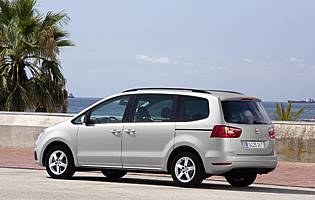 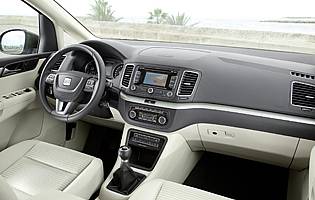 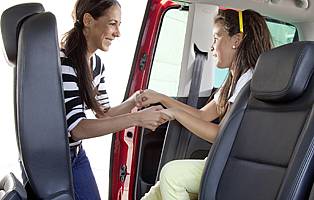 It was a long time coming but Seat's second-generation Alhambra has a lot to live up to. The mid-nineties saw flurry of activity in the full size MPV market, and the three-way joint venture between Seat, Volkswagen and Ford was the most memorable. Second time around and this Alhambra shares much with VW's second-gen Sharan.

Sharing platforms is nothing new for Seat, and with the Alhambra it has proven to be a smart move. Fundamentally the same as the Sharan under the skin, the big Seat benefits from a raft of engineering improvements. The new model does, however, boast its own visual personality and is styled to complement the rest of the Seat range.

On the engine front the Alhambra comes with a choice of two diesels and one petrol motor. In detail, the 148 horsepower 1.4-litre TSI unit petrol unit punches well above its weight, while two versions of the 2.0-litre TDI unit - 138 and 168 horsepower - form the bulk of the range. Start-stop technology is deployed across the range and there's a choice of six-speed manual or six-speed DSG transmissions.

A little bit longer and wider but a fraction lower than its predecessor, the new Alhambra now boasts a less van-like profile. Inside, the choice will be between five or seven seats, with all variants offering a huge degree of practicality and versatility in terms of seating and luggage arrangements.

A major change over this Alhambra's predecessor has been the switch to sliding rear doors. Previously a rarity, sliding doors have become the norm and are hugely desirable if all-out versatility is a key selling point. There's no shortage of family-friendly features either, while the Alhambra's car-like driving position allows for a relaxed and comfortable driving experience.

Our verdict on the Seat Alhambra 2.0 TDI 140 SE Bluemotion

Like the first, this second generation Alhambra does much to move the full-size MPV game forward. Granted, there's more choice these days and MPVs are no longer the only way to carry seven in comfort, but if a value for money alternative to a big 4x4 or van with windows is what you seek, Seat's polished people carrier is hard to beat.

It's here that the Alhambra will have the advantage over most similarly equipped rivals. Historically Seat has been more competitive than Volkswagen too, which might be worth noting if money is tight. Elsewhere, low CO2 and fuel consumption figures should help balance the family finances.

Boasting a cavernous body with a flexible interior means the Alhambra scores highly for practicality. The seats can be folded in many configurations to offer different seating and luggage combinations, with the individual actions requiring little effort. Unlike some part-time seven-seaters, the Alhambra is capable of comfortably accommodating adults in its third row. Cabin storage options are plentiful and should be more than enough for even the most active of families.

It's hard to find fault here as so much of the switchgear and instrumentation is proved technology throughout the Volkswagen Group. The effort put into making the centre console as easy to use as possible has paid off with an intuitive layout boasting large, easy to reach and locate buttons. Additional controls are present on the steering wheel for audio functions. Steering is direct and intelligently weighted to offer a degree of feedback with a light feel around town. The instrument binnacle itself is neatly styled and easy to read.

With its noticeable comfort bias, the Alhambra's ride quality is good over a wide variety of surfaces. Supportive seats do an excellent job of isolating occupants from poorly surfaced roads, and the overall cabin ambience is a hushed one - even at speed.

Remote central locking compliments the immobiliser system. Inside, lockable storage is a bonus, and a sturdy-looking removable rear luggage cover is available to keep boot-stored items out of sight.

With a full compliment of airbags and Isofix child seat mounting points for selected rear seats, the Alhambra has all the bases covered. When powered, the sliding doors boast an anti-pinch feature and ESP is standard for good measure.

With the 140 horsepower version of Seat's 2.0-litre diesel engine likely to be the most popular throughout the Alhambra's lifecycle, it's a good job that it's a solid performer. The stop-start function works well, and the motor proves willing and refined at all speeds. It's clear that a lot of work has been done on ride and handling and it shows. The bias is clearly towards comfort but that doesn't mean the Alhambra cannot be driven briskly. Even the modest 1.4 petrol unit performs surprisingly well, and the 168 horsepower diesel should satisfy power users.

It should be obvious from its specification and size but the Alhambra really does make an excellent family car. Whether you opt for five or seven seats, the overall package is a well thought out one. With ability to fold the rear seats flat the seven-seat model is doubly impressive. The sliding doors and practical interior add to the family appeal. It's a car capable of growing with families and sensible running costs should also prove attractive.

At first glance the Alhambra makes an unlikely choice as a car for novice drivers, being better suited to families or professional use such as taxi driving. That said, the big Seat is an easy car to drive once you're used to its size.

With Seat's reputation on the rise thanks to a well-rounded, good quality and affordable line-up, this Alhambra only serves to build on the firm's good work. Well put together inside and out it has a feeling of solidity that few others can match. The reserved styling is unlikely to turn heads, however.

The decision to make the move to twin sliding rear doors (powered if required) should prove a welcome one for busy families, and take accessibility to another level. The second row of seats has been designed to fold forward a good distance with minimal effort, aiding access to the third row. The car's tailgate is also a good size but easy to manage.

The stanard-fit CD and radio audio system can be upgraded to include a touchscreen sat-nav and multimedia system common to the Volkswagen Group range. Even in standard trim the audio unit is easy to operate and the wheel-mounted audio controls are an additional benefit.

With Seat deciding to take the Alhambra more up market, the big MPV looks best in business-like silvers and greys. The standard cloth trim is of a durable quality and there is also leather if desired, although that option might prove problematic if you're seeking to balance refinement with practicality.

Predictably on a car like this the A-pillars restrict front visibility to a degree, Seat's designers have done well to minimise the problem. The Alhambra is a long vehicle but it rarely proves to be a hard vehicle to place. With its lofty driving position and parking sensors, the Alhambra requires some acclimatisation but parking soon becomes second nature.

Mazda5 Clever interior a highlight of this more compact offering