Front end has a revised grille and bonnet, plus foglights on this Feline version 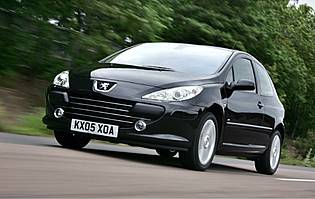 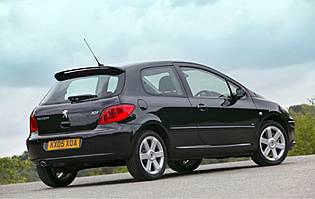 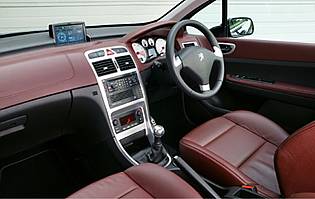 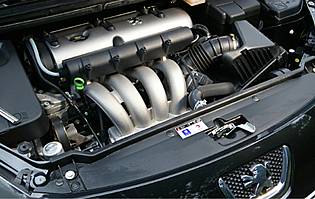 Already an important player in the competitive mid-sized hatchback sector, Peugeot introduced a revised 307 to take on newer rivals from Ford, VW and Vauxhall. As well as refreshed styling inside and out, Peugeot introduced the 180bhp 2.0-litre petrol engine to create the Feline model, the sportiest in the range.

The first 307 was introduced in 2002, and won Car Of The Year for its combination of style, practicality and performance. Despite this, the original range did not have a performance model, so Peugeot introduced the Feline model to cap the revised range.

All models have a new, shorter bonnet, larger headlamps with improved power, a single air intake and revised taillights at the rear. The Feline also gets front fog lights and chrome detailing.

On the inside Peugeot has increased comfort and equipment levels. All cars get dual-zone automatic air conditioning, allowing separate temperature settings for both front passengers. Front seat passengers have a seat belt fastening buzzer, the standard fit RDS radio has been revised and Bluetooth phone connectivity is available as an option. Revised instrument graphics have been introduced across the range, while the sporty Feline model gets a unique instrument pack.

Previously available only in the 307CC, the 180 bhp 2.0-litre petrol engine is offered in the sporting Feline model to crown the revised range. With unique colour options, 17-inch alloy wheels and a full leather interior, it combines performance and comfort with hatchback practicality. With three or five door options and a high-roof design, it is designed to accommodate a family-sized mix of passengers and luggage.

Our verdict on the Peugeot 307 Feline

The revisions to the 307 improve the interior in terms of comfort and style, keeping it competitive with class rivals. The Feline model has a useful increase in performance, though the increased fuel costs may make it less suitable as a family car. As a sporting hatch it is a success, but some buyers may prefer the powerful diesel alternative for a better mix of performance and economy.

Although the 307 Feline has a competitive purchase price, factors like the relatively high insurance grouping and economy just above 30mpg, it won't be a cheap car to run. However, compared to more exotic rivals the 307 uses few unique parts, therefore servicing should compare favourably with lesser models in the range.

The dimensions and bodyshape of the 307 are designed to maximise interior room, and although it is older than some of its rivals it is still a spacious hatchback. The tall roofline creates plenty of headroom in the front, which extends over the rear seat passengers to create a vertical tailgate. Legroom is good both front and back, with the typical split/fold rear seat arrangement for increasing the luggage capacity. The rear seat armrest also folds to give extra storage space and contains two cupholders for added practicality.

A large rev counter and speedometer dominate the instrument layout on the 307, with two smaller dials and an information panel set between them. With white backgrounds the Feline's instruments are easy to read and stylish to look at. With the optional satellite navigation fitted, a colour screen is mounted at the base of the windscreen, which although easy to see, can be distracting for the driver. The rest of the controls are large, clearly labelled and easy to use, although the controls for models fitted with satellite navigation can be fiddly to use.

Feline models are equipped with sports seats as standard, which provide more side and back support for increased comfort. Wind noise is generally well suppressed and the large glazed area allows in plenty of light, creating a comfortable interior. Rear seat passengers are also well catered for, and the Feline is no less comfortable to travel in than any of the less sporty models in the range.

All revised 307 models come with deadlocks and an immobiliser as standard, but the Feline also gets an alarm for increased security. Clever ideas like automatic locking if the car is left unlocked and unopened for 30 seconds make the 307 a secure car to own. It also benefits from a discreet exterior, which is less likely to attract unwanted attention.

The whole of the revised 307 range is fitted with comprehensive safety equipment, including six airbags, front seats with seat belt pre-tensioners and ABS. The performance Feline model also benefits from ESP as standard, to increase the safety margin for the driver.

The standard 307 is a pleasing car to drive, so the sportier Feline model has even more to offer. Although Peugeot is indicating the car's role as a sporty one, the intention is to retain as much of its comfort as possible, with the end result being a good mix between a smooth ride and responsive handling. With 180bhp under the bonnet, the Feline should be capable of impressive performance, and while figures of 137mph top speed and 0-60mph in 8.2 seconds are on a par with rivals, the reality is that it does not feel as rapid. Despite this, the Feline is fun to drive at speed, thanks to good feedback through the steering and impressive grip.

The practicality of the 307 means the Feline can still perform the role of family car with ease, although with a full load of passengers and luggage on board fuel economy is bound to suffer. Even so, the Feline is practical enough to cope with family life, and three children could be accommodated across the rear seat.

Many first-time drivers will be attracted to the Feline thanks to its looks and performance, but the size of the engine means reasonably high insurance group, which will be out of the reach of most new drivers. The purchase price may also be too high, though the combined economy figure of 33mpg may just be affordable for some.

The high specification of the Feline model boosts its quality feel, and from the driver's seat the use of leather and aluminium plus the white instrument dials make the interior feel special. Peugeot has a strong history of producing performance hatchbacks, so in terms of image the 307 Feline is successful. Sporty styling elements inside and out emphasise the car's performance, and give it the required street credibility to compete in the segment.

Even in five-door form the 307 has large doors with a wide aperture for easy access. The seating position is relatively high, improving ease of access. The boot also has a low loading lip, although the rear light clusters do intrude slightly, so wide loads must be lifted over them to fit into the boot.

At the top of the hatchback range, the Feline model benefits from a single slot CD tuner with a dash-mounted 6 CD autochanger. The autochanger is simple to operate and is more secure than boot-mounted options, though the main controls for the stereo may be fiddly to use for some. This is offset by the excellent steering-column controls. The sound quality is good, whether the source is compact disc or radio.

The Feline model comes with leather upholstery as standard, which gives the interior a lift and a feeling of quality. Door cappings, the dashboard and the seats are finished in hide, and with a choice of colour, which sets the 307 Feline apart from its rivals. Elsewhere the Feline is finished in decent quality plastic.

With a short rear overhang and near vertical tailgate, reversing the 307 into a tight spot is relatively easy, although parking sensors are an option. The low nose does mean the bonnet is out of sight, making forward movements more difficult.

Ford Focus Accomplished all-rounder, though styling not to all tastes