Bigger wheels are the most notable exterior change 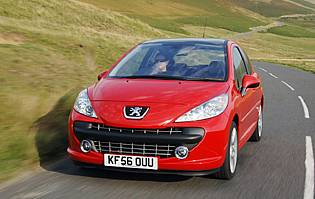 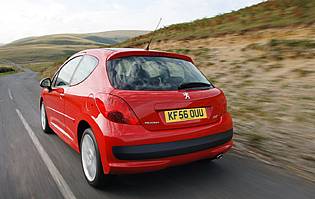 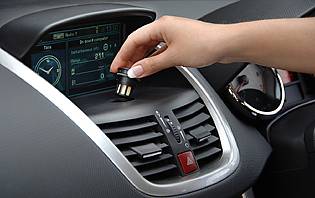 To succeed in the supermini sector, at least one performance model is required to satisfy the demands of buyers. Peugeot has a strong record in this sector, with the 205 and 206 GTIs. Following the introduction of the 207, Peugeot has introduced a GT version, the closest yet to a true GTI.

From the outside there are only very subtle hints that this is a performance oriented 207. At the front it wears the sports nose treatment seen elsewhere in the range, while at the rear a discreet tail spoiler and unique 17-inch alloy wheels signal that this is a sporting model. It also features a panoramic glass roof as standard, which adds to the appearance of the car as well as increasing the amount of light entering the cabin.

Inside, the 207 GT benefits from an increase in standard equipment. A chunky three-spoke steering wheel is fitted, and has attractive metal finishing on the spokes. A part leather interior is also standard, as is climate control, all of which add to the high specification.

The most significant change for the GT model over the rest of the 207 range is a 1.6-litre turbocharged engine. Jointly developed by Peugeot Citroen and BMW, it uses a combination of direct fuel injection and turbocharging to provide a high specific output and strong torque with reduced fuel usage and emissions.

Thanks to the technology used, it stands comparison with a normally aspirated 2.0-litre engine in terms of performance. In line with its sporty feel, the GT is a single model line, only available with three doors and a high specification, and it is also the only model to use this particular configuration of engine.

As a junior GTI, the 207 GT hits the mark. It is no more difficult to live with or drive than a regular 207, yet given the right road it is great fun and represents decent value for money.

Despite the increase in performance, costs will not be significantly increased compared with other petrol models. Fuel economy is pretty good and the insurance grouping is fair for the performance.

In keeping with most cars in this class, the 207 can carry a fairly substantial load if needed. Rear seats fold almost completely flat and the cabin has a number of storage areas.

The layout of the 207 GT is simple and little changed from the regular car, with two large instruments and minor displays between them. The optional sat-nav system is clearly displayed at the base of the windscreen, although it looks poorly integrated into the dashboard.

Despite the stiffer suspension, the GT is still comfortable to drive, with a cushioned ride and supportive seats. Noise levels are also well contained, although the engine can be slightly gruff at higher revs.

All 207 models get remote central deadlocking and automatic drive away locking plus an engine immobiliser. A category one ultrasonic alarm is provided as standard on GT models.

These days no car can compete without good safety ratings, and the 207 is no exception. A comprehensive specification is provided with a convincing series of crumple zones, front side and curtain airbags plus two Isofix mounting points. ESP is also fitted as standard, but it cannot be switched off above 30mph.

The GT performs admirably in differing situations, retaining the ease of driving in town like lesser 207s, but on the open road it is responsive and fun. The steering weights up noticeably as speed rises, while the flexibility of the engine makes rapid progress simple. Although the engine note is restrained rather than entertaining, in combination with the fluid chassis it is fun to drive.

In three-door form the 207 is less practical as a family car, although it has the space to cope with a family of four.

A regular 207 is an ideal first car, but the extra performance and cost of the GT will make it too expensive for the majority of first time drivers. In all other respects it is just as suitable as a standard version.

Quality is definitely improved on the 207 compared to its predecessor, although it is behind some of its rivals. Fit and finish is above average, while the quality of materials is mixed. The GT's image builds on the 206 and 205 GTIs, but the subtle exterior may be too plain for some.

The three-door only configuration restricts access to the rear, although the doors are substantial and easy enough to use. Some effort is required to operate the rear access levers on the front seat in three-door models.

The standard system is a single slot radio/CD, and although there are a number of upgrade options at a reasonable cost, the system does seem a little mean. The sound quality is decent, and the stalk controls are useful.

There are nine exterior colours to choose from, with some strong hues which work well given the subtle looks. Inside the trim is good, but not best in class, with mostly black plastics. Leather trim on the GT is a welcome addition.

The power steering is very light at low speeds, and visibility is good bar the thick rear pillars. Parking sensors are only optional however.