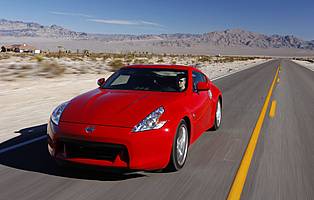 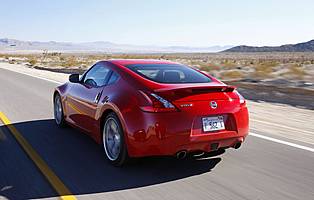 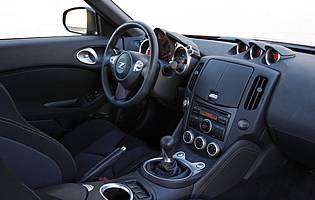 After stoking the Z-car fires with the highly popular 350Z, Nissan has introduced its replacement, the 370Z. As the name suggests, the model benefits from an increase in engine capacity, but that's just one of many improvements made to the vehicle in a quest to offer even greater performance and value for money.

Nissan did a fantastic job of bringing the Z-car into the 21st century when it launched the 350Z in 2003. The aggressively styled, two-seater, rear-wheel drive model was the embodiment of what Nissan refers to as its Z-Car DNA. Its replacement, the 370Z builds on that ethos, honing the much loved qualities of the previous model and improving where it fell short.

The distinctive exterior sees detailed additions such as the sculpted Boomerang lights, bonnet lines that continue into the roof and Z-badge indicators. Inside, the focus has been on improving the quality of materials but the changes run far deeper than cosmetics, with the driving position experience also improved through a redeveloped driver's seat and controls.

A new chassis is designed to make the model both sportier and more manageable. Shortened by nearly three inches with a wheelbase down by nearly four inches and with a wider track front and rear, you might expect the model to be even more of a handful. However, big weight savings and torsional rigidity vastly improved through additional cross members, revised suspension and a new cantilevered roof design that allows the hatch to sit on top of a strengthened frame means the 370Z is more agile and less prone to bite back.

The engine, a 332bhp V6 with variable valve event and lift, offers a smoother delivery and increased power. A six-speed manual gearbox delivers power to the rear wheels through a carbon fibre prop shaft and, for the first time, the Z-Car is available with an automatic: seven-speed with manual paddle shift over-ride. A world-first Synchro Rev Match system is available with both transmissions, blipping the throttle on downshifts to ensure a precision change every time.

Our verdict on the Nissan 370Z Manual

A definite improvement on the already excellent 350Z, the 370Z instantly feels like a more manageable package despite its extra power and firmer chassis. Improvements inside make it feel like greater value for money and exterior improvements are distinctive and contemporary. Every bit the Z-Car, the 370Z has retained the 350Z's edge while toning down the thug within.

Always a value for money proposition, the latest Z-car represents a lot of power and equipment for the outlay. Insurance groupings, fuel bills and tyre costs will not be cheap, however Nissan's traditional strong build quality should ensure reliability.

Not the most practical of vehicles, Nissan has done its level best to improve practicality. The rear cross member has been relocated under the boot floor to increase luggage capacity and there's better storage in the cabin area, too, with trays behind the seats and a cubby hole between them and in the dash where sat-nav is not present. Don't expect to carry much more than weekend luggage in the model, though.

Featuring the now traditional Z-car row of extraneous dials across the top of the dash centre, the 370Z driver has no shortage of information to sift through. The instrument binnacle is well set up and clear to read with a selection of dials and light metres for fuel and temperature. The centre console is equally well designed and easy to navigate. The raised transmission tunnel places the gear lever perfectly and the accelerator pedal has been changed to a floor hinged assembly for greater control. Knobs and switches all feel chunky and robust, too.

For a sports car, the 370Z's ride is very cosseting. Road noise does tend to penetrate the rear and bounce around the hatch area but the slippery shape suppresses wind noise well. The driving position is very adjustable with the omission of reach adjustable steering, and the driver's seat is separately contoured to offer greater support. The addition of a knee pad to the transmission tunnel prevents bruising during more aggressive driving and even the base model is well specified with auto lights, electric windows and air-con.

A full security system with alarm and immobiliser protects this highly desirable car. Keyless entry is standard but, although there's a small amount of secure storage up front, items in the boot will be on full display.

With only two occupants to look after, Nissan has been able to focus its attentions, resulting in dual-stage front airbags, seat mounted side-impact and roof-mounted curtain side airbags. The model also features active head restraints, an energy absorbing steering column and a tyre pressure monitoring system as standard. Advanced traction control also helps keep the power in check, but can be switched off for track use.

With a gutsy but smooth V6 engine, beautiful steering, instantaneous pedal response and a finely balanced chassis, the 370Z is a joy to drive. It feels at its most agile when pushed and is more forgiving than its predecessor despite the power increase. The manual gear change is weighty and precise and the Synchro Rev Match system adds to the appeal with its vocal blips aiding the downshifts. The automatic box is smooth and great for cruising, with the paddle shift responding keenly at higher revs. Visibility is an issue with large blind spots over the shoulders and mirrors that hinder peripheral vision, but those issues fail to detract from an absorbing and rewarding driving experience.

Two-seats-only limits the 370Z's family potential. Weekend fun for one young passenger will be the limit.

Although value for money, the 370Z will be too expensive and powerful for the vast majority of young drivers to buy or run. Its performance would also make it unsuitable for the novice driver.

The interior quality of the 370Z has been improved compared with the 350Z, while the exterior remains as well put together as the previous generation model. The 370Z is also likely to build on the sterling reputation of its predecessor thanks to great looks and performance. Z-Cars benefit from even greater kerb appeal than some of their more expensive rivals the thanks to their illustrious heritage.

The 370Z's low ride height and body shape mean it's not the easiest of vehicles to access, however, the cantilevered roof does mean less stooping on entry. The doors are long, bulky and need to be opened to a wide angle for easy entry. The seats are simple to slip into, despite the bolsters. At the rear, the hatch is well assisted and easy to open.

The standard sound system is a powerful piece of kit, with acoustics aided by the compact cabin. Even so, high quality upgrades are available including a 9.3GB hard drive and eight-speaker system with sat-nav and Bluetooth hands free. The standard system features an easily navigated layout, single CD slot and radio.

A healthy array of solid and metallic colours is available for the 370Z and its sleek and detailed body looks great in all of them. Deep offset alloys designed specifically for the model are available in 18-inch or arch-filling 19-inch form and neat touches such as the bulky door handles and Z-embossed indicators give the model lots of character. Inside, there's leather splashed around the cabin even when specified with cloth seats and plastics are an improvement over the outgoing model.

Less confident drivers will find parking the 370Z something of an issue. The rear window offers limited visibility out of the rear and the view over the shoulders is extremely restricted by the wide pillars. A small window placed in them is a token gesture. Wide arches complicate matters further.