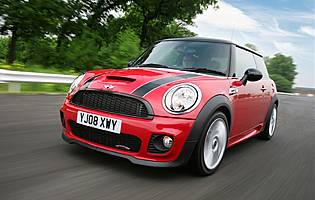 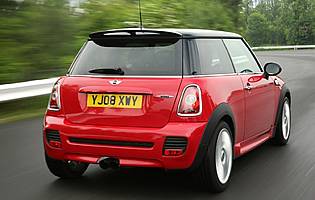 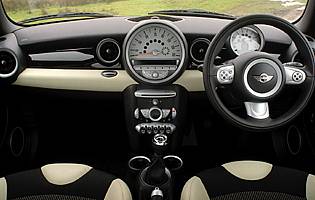 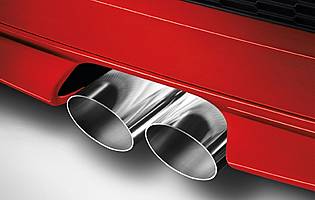 The latest instalment of the new Mini saga is the Cooper S Works, the current range-topping model and also the most powerful version on sale. The Works badge indicates the highest level of performance and handling, and with visual enhancements too, it promises much in the way of entertainment.

The shape of the new Mini is now familiar to all, but the changes to the Works version are relatively subtle over the existing Cooper S model. The 17-inch alloy wheels are standard, as are the aerodynamic body changes, with a roof spoiler and deep front apron. At the rear, a twin exhaust hints at the performance on offer. A number of 'Works' badges also confirm that this is the fastest Mini.

The cabin also benefits from a number of upgrades. Leather trim is fitted as standard, with a smart anthracite roof lining to match. The chunky sports steering wheel is also leather-wrapped, and the large central speedometer is graduated to 160mph. The fascia is finished in piano black plastic, a feature unique to the Works model.

Mechanically the Works is based on the Cooper S, but with some significant modifications to extract extra performance. The 1.6-litre turbocharged unit remains, but a larger turbocharger, a de-restricted exhaust system, revised valve specification all help to increase the performance. An improved braking system includes bigger discs to increase stopping power.

Perhaps the biggest surprise is that the Works retains the same suspension settings as the Cooper S, although the Mini in any form is noted for is impressive handling. What it does have however is Dynamic Traction Control, which performs a number of functions designed to maximise grip and traction.

Our verdict on the Mini Mini Cooper S Works

The Works is truly the ultimate Mini, delivering the highest levels of performance while still retaining its everyday functions and requiring few compromises. The biggest issue it may face is that the standard Cooper S offers a very similar experience for less money.

Running costs should be reasonable, thanks to the impressive economy. The TLC servicing package is also continued, providing high levels of maintenance at a very reasonable cost. However, the purchase price is undeniably high for a car of this size.

This is an area in which the Mini is behind its competitors, although it is not strictly designed to compete in these areas. Front seat passengers are well catered for, but those in the rear have restricted legroom. The boot is also small, although it is bigger than the outgoing model. Oddments space is also at a premium.

The central speedometer carries most of the information, with a supplementary display in the rev counter behind the steering wheel. The design and quality of the controls is good, aside from the rotary wheels for changing the ventilation speed and temperature, which are fiddly to use.

Although the sharpest Mini available, comfort and refinement does not suffer significantly. The sports seats are supportive, the ride is firm but not harsh and, although louder than the standard car, it can still cruise comfortably.

A high level of safety has been built into the Mini, including anti-lock brakes, cornering brake control, automatic door locking and six airbags. Visibility is also good, as is the Mini's handling - both of which contribute to the car's overall safety.

Fun is the main appeal of the Mini and it is unlikely to disappoint. The extra power in the Works model gives a slight advantage over the regular Cooper S, making it a genuinely rapid car. The switchable Dynamic Stability Control system is a useful addition, allowing the driver more freedom to exploit the impressive chassis in the right conditions. The brakes are also strong, making for an excellent overall package.

The Mini Works offers ease of driving, fun factor and reasonable economy, but the high purchase price and insurance costs would make it prohibitive for most.

The Mini's image is almost untouchable, recalling the original 1960s Mini but offering modern convenience and reliability. The high degree of personalisation also allows buyers to create a car that feels individual, which is a major attraction. Quality has improved significantly, and the new Mini feels more robust than before.

Cooper models are fitted with a radio/CD as standard, operated by simple controls. Sound quality is respectable, with the speedometer displaying carrying audio information. An auxiliary socket is also fitted as standard, allowing MP3 players to be connected with ease.

The vast majority of the plastics and fabrics feel sturdy and hardwearing, while the mix of chrome and piano black plastic works well. Additionally, an interior light package gives subtle illumination throughout the cabin as well as the option to change the colour at the flick of a switch.