Subtle differences include the front grille and headlights 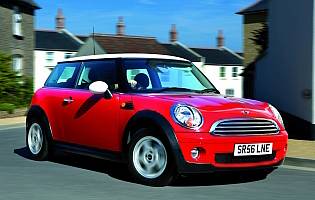 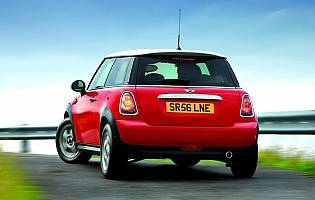 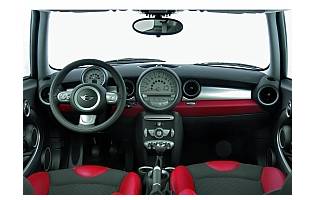 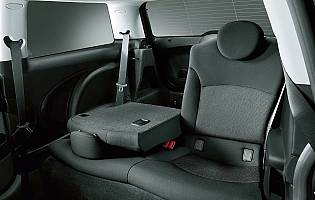 The most famous small car ever made has been re-born. Not content with capturing thousands of buyers with the first new Mini, BMW has introduced a second-generation version, aiming to improve on the previous car in every area while retaining the charm and fun that made it such a hit in the showroom.

The most notable aspect of the new Mini is its looks, or rather how little it differs from the previous version. The truth is that all the exterior panels are new, but even dedicated fans will have some difficulty noticing the differences. The Mini has been lengthened fractionally, while the headlamps are now mounted to the front of the car rather than the bonnet, for improved performance and reliability.

A similar approach is evident on the inside. Once again, every panel has been changed, yet it will remain familiar to those used to the previous car. The large central speedometer dominates the dashboard as before, but notable changes include all-new ventilation and audio controls. The range of options is even more comprehensive than before, allowing a greater degree of personalization in the cabin.

Significant changes have also taken place under the skin. A new range of engines is now fitted to the Mini, with varying outputs depending on the model. The 1.6-litre unit showcases new technology, with BMW's Valvetronic system on the One and Cooper models, while the high power Cooper S uses a turbocharger and direct injection, abandoning the supercharger system used on the previous car.

Crucial to the new car retaining the spirit of the old one is the handling, and although the Mini gets substantially changed suspension, particularly at the rear, BMW have been careful to maintain the grippy and playful nature while adding a welcome extra degree of ride comfort.

Our verdict on the MINI Mini Cooper

There can be few more difficult tasks than replacing a car that has been so popular, yet BMW has clearly succeeded with the second generation Mini. It retains all of the charm of the previous version, but improved quality, more refinement and better design make even more attractive.

Running costs should be very reasonable, thanks to the range of more fuel efficient engines and improvements in reliability and ease of servicing. The tlc servicing package is also continued, providing high levels of maintenance at a very reasonable cost.

This is an area in which the Mini is behind its competitors, although it is not strictly designed to compete in these areas. Front seat passengers are well catered for, but those in the rear have restricted legroom. The boot is also small, although it is bigger than the outgoing model. Oddments space is also at a premium, despite a redesigned cabin.

The cabin redesign includes new audio and ventilation controls, and for the most part they work well. The central speedometer carries most of the information, with a supplementary display in the rev counter behind the steering wheel. The design and quality of the controls has been improved, aside from the rotary wheels for changing the ventilation speed and temperature, which are fiddly to use.

Here this latest Mini is an improvement on the old, with better ride quality without compromising the fun factor. The seats are also more comfortable and supportive than before, and refinement has also improved. The frameless doors do result in some wind noise at speed however.

A high level of safety has been built into the Mini, including anti-lock brakes, cornering brake control, automatic door locking and six airbags. Visibility is also good, as is the Mini's handling - both of which contribute to the car's overall safety.

Fun is the main appeal of the Mini, and it is unlikely to disappoint. The steering is sharp and responsive, there is sufficient grip on offer to make good progress but not too much, allowing the driver to enjoy the excellent balance. The engine provides sufficient performance but no more, although it does respond well to throttle inputs.

The Mini Cooper would make an excellent first car, with its ease of driving, fun factor and reasonable running costs. As long as the initial purchase price is not an issue, it would be a dream first car for many new drivers.

The Mini's image is almost untouchable, recalling the original 1960s Mini but offering modern convenience and reliability. The high degree of personalization also allows buyers to create a car that feels individual, which is a major attraction. Quality has improved significantly, and the new Mini feels more robust than before.

Cooper models are fitted with a radio/CD as standard, operated by simple controls. Sound quality is respectable, with the speedometer displaying carrying audio information. An auxiliary socket is also fitted as standard, allowing MP3 players to be connected with ease.

As well as a greater choice of cabin colours, improvements in materials give the interior a much better feel. The vast majority of the plastics and fabrics feel sturdy and hardwearing, while the mix of chrome and black plastic works well. Additionally, an interior light package gives subtle illumination throughout the cabin as well as the option to change the colour at the flick of a switch.