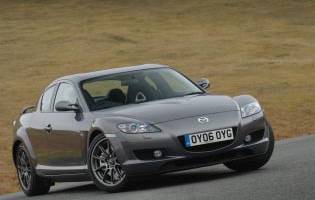 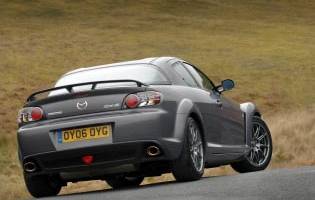 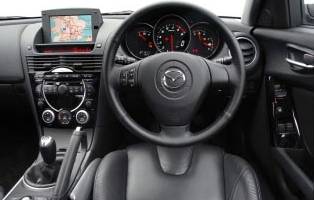 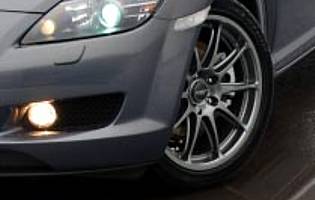 Mazda has taken the bold decision to further enhance its impressive RX-8 sports coupe with the introduction of the PZ edition. With a number of cosmetic and mechanical enhancements, it is a more focused model of an already exciting car. Despite the changes, it remains faithful to the template that makes the standard RX-8 such an appealing car.

The RX-8 is already an arresting shape thanks to its unique design including the practical 'suicide' door arrangement. The low nose and pronounced wheelarches make it instantly recognisable, while still maintaining decent interior space. The PZ model adds extra exterior features, including unique grey alloy wheels, a larger exhaust, sporty door mirrors and a choice of two colours. A different spoiler is also fitted to the rear of the car, designed to increase downforce and grip at speed.

Mechanically the PZ benefits from bespoke Bilstein dampers and Eibach coil springs which are considerably stiffer than the standard items, as well as lowering the ride height by 15mm. The suspension changes have been engineered by Prodrive to ensure a higher standard of handling and grip without compromising the ride quality. To achieve this, the rear anti roll bar and bump stops have remained unchanged.

The interior of the RX-8 PZ is identical to that of the higher specification 231 model, with black leather on the seats, the steering wheel, gear knob and handbrake lever. The lower power 189 model comes with a cloth interior, but all versions have a smart centre console and deeply cowled instruments. The bucket seats and large transmission tunnel give the interior a cockpit-like feel, adding to its appeal as a sports car.

An important element of the RX-8 is the engine design. The 1.3-litre rotary unit uses twin rotors instead of pistons. Its key advantages are smoothness and high engine speeds, thanks to the reciprocating motion replacing the traditional up and down movement of pistons. The engine also has a very high output for its size - at 174bhp per litre, it is superior to most production cars.

The Mazda RX-8 succeeds in combining a genuine sporting drive with a good level of practicality, making it a genuine competitor for a regular saloon as well as its coupe rivals. The charismatic rotary engine and fine handling make it enjoyable to drive, and only the potential costs and poor fuel consumption count against its abilities.

A high standard of security is maintained by the standard fitment of an engine immobiliser, remote central locking and an internal alarm system.

For a car of this nature the RX-8 is impressive, with decent passenger space front and rear, plus a useful boot. There are a number of storage areas in the front, although with all four seats occupied there may not be enough room for all of their luggage.

The Mazda has an excellent interior layout, with bold instruments mixing analogue and digital displays to great effect, and subtle illumination makes them easy to read. All the major controls are grouped around the centre console, with minor buttons mounted on the drivers side.

The level of comfort on offer in the RX-8 is impressive given its sporting credentials. The front seats are supportive and well designed, offering a good range of adjustment. Noise levels are well contained, although the rotary engine is slightly louder at cruising speeds. The ride quality is also good, controlling most bumps with ease, although the PZ model has stiffer suspension, which diminishes the level of bump absorption.

A high standard of security is maintained by the standard fitment of an engine immobiliser, remote central locking and an internal alarm system.

As well as safety items such as ABS, six airbags and Isofix child seat mountings, the RX-8 also benefits from a traction control system and a dynamic stability control system, designed to ensure the car remains on the intended course despite a loss of grip. This system can also be disabled by an interior switch.

The powerful and free spinning rotary engine dominates the driving experience, requiring high revs to deliver maximum performance but at the same time providing a smooth power delivery and an exciting exhaust note. The gear change is well matched to the revvy engine, with a short and snappy shift which helps to get the most from the engine. The brakes are strong and largely fade free, and the suspension strikes a fine compromise between ride and handling. The PZ model is biased towards sporty driving, and so suffers more on broken roads.

The RX-8 could perform the role of family car with surprising ease given its performance and coupe looks, although it would still not manage as well as a medium sized hatchback. The chief issue would be getting a child seat into the rear of the car, as well as a buggy or other bulky items into the boot.

The RX-8 is likely to be too expensive to buy, run and insure for first car buyers. Despite its performance it is an easy car to drive, but it is still unsuitable for inexperienced drivers.

The RX-8 has a high quality feel throughout, initially through the obvious high standard of design but also through the impressive quality of the materials and construction. The Mazda's image is built on a successful history of performance cars, while the RX-8s unique styling is likely to give it a broad appeal.

The key to the RX-8s success as a four-seat coupe is the addition of the suicide doors. They open easily once the front doors have been opened, making entry to the rear seats much more straightforward than in rival cars. Although not quite as easy as a saloon or hatchback, it is a major bonus given the cars athletic appearance. The boot is also similar to that of a saloon car, for simple access to the load area.

Higher specification RX-8s get a Bose radio/CD system with a 6-disc CD auto changer. This delivers superb sound quality even at high volumes, and is neatly integrated into the centre of the dashboard.

The RX-8 is fitted with a black leather interior as standard, and combined with the smart illumination of the interior, creates a very appealing feel to the cabin. The quality of the trim is also of a high standard, with the use of piano black plastics and silver finishes.

The unusual design of the RX-8 does mean that slow speed manoeuvres can be difficult, as it is difficult to see the nose of the car, and the view through the rear window is slightly restricted. However, the power steering is light as are the rest of the controls, making it easy to move in a confined space.

Audi TT Coupe Brilliant design, not as much fun to drive