The IS250C is the first drop-top IS model 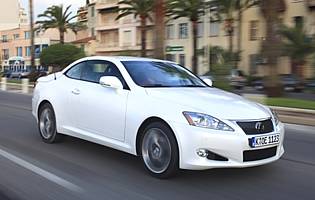 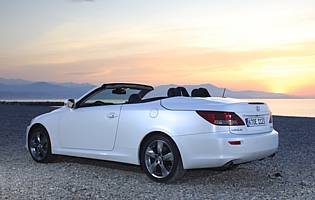 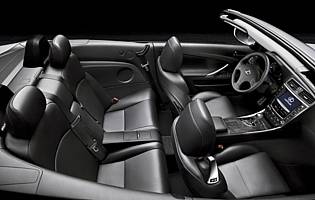 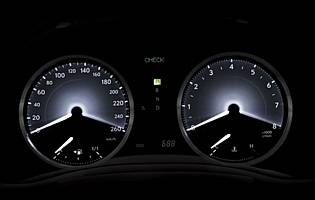 The first convertible version of the Lexus IS model is set to replace the Japanese premium manufacturer's SC430 as the open-top car within the range. Aimed at a slightly younger driver, the model is powered by a V6 petrol engine and comes in just two well-equipped trim levels.

The Lexus range has been expanding at a slower rate than that of some of its premium sector rivals, but each newly developed model from the luxury arm of Toyota shows signs of having undergone careful consideration before being released. The IS250C is no exception, taking over from the controversially styled SC430 as the convertible model within the Lexus line-up and expanding the appeal of the popular IS range at the same time.

At launch, the convertible IS is available with a single engine and transmission option, a 205bhp V6 petrol unit mated to a six-speed automatic transmission. Just two trim levels are available, both with a high degree of standard equipment and luxurious interiors. With these specifications and power-train options the IS250C is clearly intended as a luxurious convertible tourer rather than a sports car, an ethos reflected in the close attention paid to refinement and comfort within the new car.

The centre-piece is the folding roof. Made from aluminium to keep additional weight to a minimum the roof can be raised or lowered in just 21 seconds; faster than any other three-part system on the market. Folding into the boot, it leaves a good looking and streamlined shape behind it. The clever system even uses the vehicle's parking sensors to ensure there's room behind the car to safely operate.

Designed to seat four with two individually sculpted seats in the rear, the IS250C features two doors, lengthened to allow for easier access to the rear. Fully electric seats with a one touch control add to the luxurious feel.

Our verdict on the Lexus IS 250C SE-L

Although no sports car, the Lexus IS250C is one of the most refined and comfortable four-seat convertibles money can buy. Competent on road but failing to provide any real thrills, it benefits from fantastic build quality and impressive standard specification. It's certainly not a cheap vehicle, but in terms of comfort and quality feels worth every penny.

The Lexus IS250C is not a cheap car even in its most basic form and, although standard equipment levels are generous, additional options will quickly see costs escalate. Fuel economy just breaks 30mpg - respectable considering the engine size and vehicle weight - and Lexus reliability should ensure limited expenditure at services.

The IS250C is extremely spacious in the front with plenty of head and elbow room. It puts in an impressive effort in the rear, too, with the backs of the front seats arched to allow for more legroom and enough headroom for all thanks to the sunken, angled position of the rear seats. Although a little tight on shoulder space in the back, it will seat four adult comfortably. The boot is disappointing however, with space restricted with the roof folded and an awkward basic shape making bulky items hard to squeeze in.

Highly attractive, softly lit dials do a little dance when the ignition is first switched-on, are clear and easy to read. The centre console arrangement will be familiar to Lexus fans and is easily navigated. Major controls are duplicated on the steering wheel for additional ease of use. Gear change paddles are also located behind the wheel and are a good size and a pleasure to use. The control layout is traditional, with the exception of the foot operated parking brake, and is unlikely to cause any consternation.

Near decadent levels of luxury make the IS250C an extremely comfortable car to travel in. Its refinement is the main attraction, with the engine remaining subdued under all conditions and the body engineered to keep wind noise to a minimum. The work is evident, particularly with the roof stowed, and the level of refinement at speed with no roof in place is uncanny. The stiff chassis means scuttle shake is nearly completely absent, gear changes are extremely smooth and quiet while the level of standard equipment is extremely generous. In the SE-L model, seats are both heated and air-cooled.

Keyless entry, remote central locking and an alarm and immobiliser help secure the IS250C from intruders. Double locking provides additional security as does the metal roof; more secure than the canvas offerings of some competitors.

Both trim levels boast the same vast array of active and passive safety systems with the only optional extra being the adaptive cruise control and integrated pre-crash safety system. A raft of airbags covers the front of the car, while rear occupants get protection courtesy of the crumple zones and side impact beams. Traction control, stability control, electronic brake distribution and brake assist are all standard.

The IS250C's driving appeal lies in its ability to waft sedately with a high degree of refinement. The V6 engine is powerful on paper, but less impressive on the road and combined with the vehicle's weight offers only average performance, needing to be revved hard to find any real acceleration. Despite its weight, the IS250C is a very competent road holder and the steering, the most dynamic aspect of the driving experience, is responsive and pleasant to use. As a long distance cruiser, however, the IS250C really comes into its own. It's a fantastic car to drive long distances, roof up or down.

Family appeal is only really restricted by the awkward boot arrangement. The Lexus IS250C could easily serve as regular transport for a family of four, although the rear may prove tiresome for adults attempting to get very young children in and out.

The IS250C is too expensive and powerful a car for the vast majority of younger drivers. Although Lexus aims the model at a younger audience than its previous convertible model the SC430, it is still aiming to attract the more mature driver.

Lexus is a manufacturer that prides itself on the quality of its vehicles, and the IS250C is no exception to the rule. The build quality and materials are almost above reproach, with only the slightly dated feel of some of the Lexus-generic centre console hinting at anything other than exceptional quality. The great looks and folding metal roof add to this particular Lexus model's appeal, making it a highly desirable vehicle.

Long doors, a fully electric adjustable interior and a sensible seat height mean there's little trouble accessing the front of the IS250C. The rear is reasonably simple to get into as well, thanks to a decent sized portal and motorised folding seats. Getting out of the rear is more arduous a task, however.

Both trim levels come with a premium eight-speaker audio set-up which is extremely impressive in terms of sound quality and ease of use. The more expensive SE-L variant adds a built-in navigation system to the arrangement. Reasonably sophisticated and simple to operate, it also brings Bluetooth and a rear view camera. All models get a six-disc changer and USB input, but real music fans can upgrade to the 12-speaker Mark Levinson 5.1 surround sound system at additional cost.

The IS250C is quite a colour sensitive model and looks particularly good in lighter shades. In keeping with the car's executive positioning a range of metallic paint options is available. Interior trim is very luxurious with high quality leather for the seats and neat touches such as illuminated, embossed sill plates. The only let-down is that some of the interior knobs, switches and plastics don't meet the standards set by the rest of the car.

Clearly, parking is made considerably easier by the rear view camera, but without it and with the roof in place, reversing is more of an issue due to poor visibility directly out of the tiny rear window. The view over the shoulder is good, but for genuinely hassle-free parking you'll need to opt for the camera or drop the roof.

Audi A5 Cabriolet line-up has an impressive range of engines