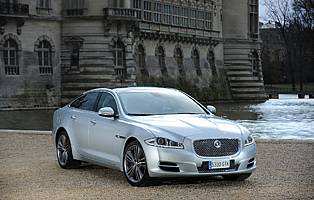 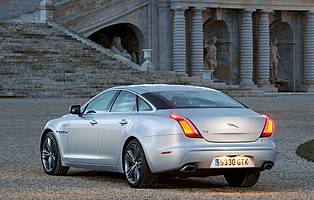 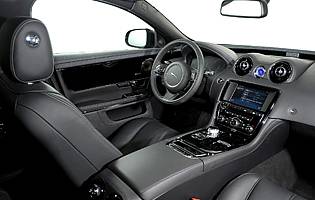 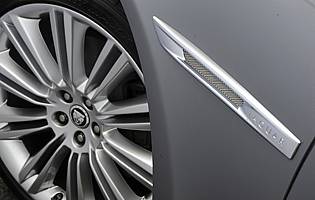 Seeking a new, younger audience for its products, recent years have seen Jaguar adopt a bolder, more adventurous design policy. This is most obvious with the firm's mid-size XF. Replacing the flagship XJ with something modern but without alienating longtime fans of the marque was a considerable task. The end result blends contemporary design cues with more than a nod to Jaguar's past.

Although the XJ has hints of its forebears - particularly the squared grille and strong shoulder line - it is unmistakably a modern design. Closer to a four-door coupe than a conventional saloon, Jaguar has set the XJ apart from its more conventional rivals. That the extra length of the long wheelbase model is cleverly disguised should please buyers seeking the added room but not at the expense of aesthetics.

As has become the norm with Jaguar's flagship model, the XJ's exterior is again formed from aluminium. By doing so Jaguar has ensured that the XJ is significantly lighter than the competition, bringing benefits in terms of performance, efficiency and economy.

Predictably for a car in this sector the XJ is available in both regular and long-wheelbase trim, with the latter providing the extra rear legroom demanded by some customers. Both versions also have full-length sunroofs, although on the inside of the car this is broken up into two by the roof lining. This also has an impact on headroom, which is less generous than some rivals.

Although the XJ uses some components from the previous generation car, everything is either revised or new. Of note is the engine range, many of which have already delivered impressively in the XF saloon. A revised six-speed automatic transmission is standard, as is adaptive drive control, which alters throttle response, steering and the actions of the air suspension depending on the driver's wishes. This is important as Jaguar is keen for buyers to view the XJ as a car you'll want to drive as much as be driven in.

Our verdict on the Jaguar XJ 3.0 V6 Diesel Portfolio LWB

After years of sticking with a traditional design template for the XJ, Jaguar has chosen to be brave with the looks of this XJ. By aiming for a more stylised approach compromise has been inevitable (cabin space, for example), but in all other respects the XJ offers everything that a sporting luxury car buyer would want.

There's no question that running a car such as the XJ will cost more than your average Ford Mondeo. The initial outlay plus insurance premium will reflect this. Opting for the impressive diesel version brings respectable economy and emissions performance, and therefore brings the running costs down to a more acceptable level.

The XJ is a big car and its cabin is a plush environment. There's sufficient space for four adults, but it soon becomes a more intimate space than some rivals. The car's sloping roof is a factor but opting for the long wheelbase variant does improve matters, and will likely be the default choice for this running the XJ as a business tool. Elsewhere in the cabin there's plenty of oddment storage fore and aft, while the car's boot is wide but disappointingly shallow.

It's been acknowledged by the critics that the XJ's displays and controls are some of the best around. The all-electronic main display can be configured to show a wealth of information, while the central colour touchscreen unit is also impressive. Available with the innovative Dual-View system it allows the passenger to view TV or a DVD while the driver can only see system screens or the satellite navigation. The XF's rotary gear selector is present, along with an easy to use electric handbrake control.

As Jaguar's flagship saloon, features such as massage seats and four-zone climate control are to be expected. AS such getting comfortable is rarely an issue in the XJ. Noise levels are impressive too, with wind noise only becoming apparent above 70mph. The ride comfort is generally good, although some may find the suspension a little firmer than a traditional luxury saloon.

For both convenience and security reasons all XJ models come with keyless entry and ignition plus a high specification alarm with battery back-up - something that should prevent even the most determined thieves from gaining access.

As you'd expect with a car occupying the premium end of the market, a high complement of safety equipment comes as standard with XJ, including a minimum of six airbags and tyre pressure monitoring on some models.

Keen to attract a younger buyer to the car, Jaguar has noticeably shifted the XJ's bias from all-out comfort to a more sporting set-up. The XJ's rear-drive chassis, slick automatic gearbox and responsive engine range - especially the diesel unit - should be good news for keen drivers. With a sports mode available to further sharpen responses, the XJ is closer to that of a BMW 7 Series. Traditional Jaguar fans will rue the loss of the car's previous trademark plush ride, though. That said, for a big car the XJ is surprisingly agile.

There's no question that the XJ could accommodate a growing family - there's enough cabin space. The presence of plush upholstery and the car's shallow boot could prove limiting factors, however. And it would potentially be a bit of a squeeze in the supermarket car park.

There's no mistaking the fact that the XJ is a big car. Even a seasoned driver will need to time to get accustomed to its size. The parking sensors help but it might be better to set your sights on something smaller - and less expensive.

Both inside and out the XJ feels like a coherent design with plenty of nice touches, and the general standard of materials is very high. There are one or two signs of cost cutting such as some minor switchgear, which puts it just behind the best German rivals. The XJ's image is likely to be its greatest asset, as it builds on the past but also looks forward with the bold exterior design.

Predictably the long wheelbase version of the XJ fairs better in this respect as its rear doors make access and egress that bit easier. The relatively low roofline may mean taller passengers will have to duck more than in a rival product however. At the rear the car's boot can be accessed remotely from the key fob.

Jaguar has continued its association with Bowers and Wilkins for its in-car audio, and the top flagship 1200W system delivers a truly impressive aural performance. Regardless of input (radio, CD or MP3 player) the sound is highly detailed, crisp and distortion-free up to very high volumes. All features can be controlled via the central touchscreen display.

With the XJ's blacked-out rear pillars, choosing a light or dark shade can quite dramatically change the car's appearance. Unusually for a car in this class, it looks equally good in black or in silver, although some of the finer exterior detailing is lost. The cabin allows lots of personalisation options, with lots of leather as standard and a choice of woods and other trims.

There's no doubt that with the XJ being such a long car with a relatively small glass house parking can be a tricky task. The light power steering and standard parking sensors are a huge help, though. A reversing camera is either standard or available as an option across the range and does much to further boost confidence.

Lexus LS460 Excellent value but conservative looks can be off-putting