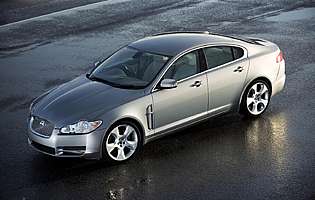 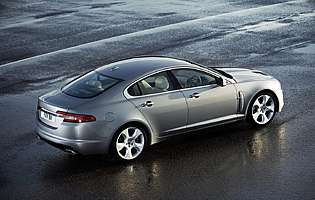 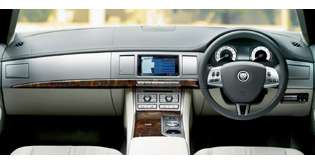 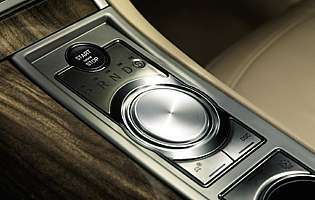 As the initial launch promotion stated, this XF is the new Jaguar. While not entirely new from the ground up - familiar engines and remnants of the S-Type platform remain - in looks alone the XF has been designed to spearhead the iconic company into the future and attract buyers of a lower age along the way.

A radical departure stylistically for Jaguar, the XF was designed to be the first of many cars eschewing the firm's old, gentlemanly approach to form and function. On the surface at least, the XF succeeds - it really does look like nothing else from the Jaguar design office. And it's one of the few cars that has remained largely faithful to the original concept, itself lauded as a huge step for the Coventry car maker.

The devil is also in the detail; a quick walk around the XF highlights the car's complex curves, chrome detailing, rakish profile and high waistline. A similar approach sees the XF's cabin ditch the glossy wood of old for a more modern, minimalist appearance, and complimented by a tasteful amount of light coloured trim.

In a bid to distance the car from austere German rivals, Jaguar has injected some welcome character into the XF. The ownership experience is destined to be a positive one if the presence of a pulsating starter button, air vents that slide into action and a rotary gear selector that rises into place each time you start the car are anything to go buy.

Far from being gimmicks, Jaguar hopes such details will entice buyers young and old - but especially young - to the car, as it shows that the designers and engineers care about cabin ambience and the need to make modern technology user friendly. That the XF drives with more vigour and keenness than anything previously also shows that the XF has become more athletic and youthful in the way it performs.

Our verdict on the Jaguar XF 2.7 Diesel V6 Premium Luxury

Cast aside all the usual Jaguar stereotypes, because the XF is not your usual Jaguar. There may be a few familiar exterior styling cues, but everything else has changed - and for the better. More athletic, more refined, better equipped and bursting with useful, clever technology, the XF is a quantum leap forward. Although good in their own right, the car's engines might be familiar but they are the only tangible link to the Jaguar of old.

There's no hiding the fact that the XF is not a cheap car. However, it is surprisingly good value when its level of standard equipment is compared with its rivals. With diesel power likely to be the most popular in the UK, demand and subsequent residuals should be strong. Diesel will also return the best fuel economy and lowest emissions - the latter especially important for fleet customers.

Past Jaguars have never been regarded as packaging masterpieces, but the XF goes a long way to overturning such perceptions. Front seat occupants fare well, with plenty of head, leg and elbowroom. At the rear legroom is good, although headroom could be better if you're tall. Oddment storage is good for a car in the executive class - MPVs are the overall benchmark here. At the rear the XF's boot is a good size and will accommodate a couple of suitcases with room to spare.

The XF's main dials are very easy to read and the central colour display is straightforward and intuitive. The touchscreen properties require a light touch though, as the display can get crowded with various options. Down to the centre console, and the XF's radical gear selector is actually easy to use. The rotary device rises and falls with the ignition on and off respectively - the starter is a red, pulsating button. Simply spin it right for Drive (plus down and further right for Sport) and left for Reverse and Park. The car's steering wheel paddles can be used at anytime.

Plush seats, a quiet cabin and plenty of creature comforts all make the XF's cabin a pleasant place in which to spend a few hours. Engine and road noise are noticeable by their absence. Rear seat adult occupants of a tall nature might find the sloping roofline less attractive from the inside, however.

All the usual remote locking and immobiliser features are present in the XF. Depending on the model, you can have a completely keyless operation - just walk up to the car, get in and start it - for extra convenience. It also negates the need for you to get fumble for the car's key in locations where personal safety could be compromised.

A plethora of airbags highlights Jaguar's commitment to safety, while the engineers' use of intelligent electronic stability controls ensure that keen drivers get to have some fun also. Isofix mounting points are also present, allowing you safely transport children.

As you would expect for a modern, sporty executive car, the XF carefully balances refinement with an engaging, driver-friendly character. Ride comfort is well judged, although noticeably firmer than the old S-Type. Steering is weighty and accurate, while the brakes are powerful. Keen drivers will enjoy the car, although it's the supercharged petrol V8 engine that will excite the most with its rorty exhaust noise and generous power reserve. The more frugal diesel will be the volume seller and is quiet, refined and willing, although lacking in outright thrust to exploit the XF's full potential.

If you look past the plush cabin upholstery - easily damaged by the very young or anything with four legs and a tail - the XF could pass as a family vehicle. The entertainment system would certainly pass muster with young, bored children, and access to the rear is straightforward if you're only concerned with the welfare of little people. Oddment storage can't match that of a people carrier, and the XF's boot might struggle with pushchairs and the weekly shop together.

There's little point of the XF as a first car: it's not going to be cheap and, even in diesel form, is no slouch. There's no question that it's an easy car to drive - auto gearbox, power steering - but a less powerful and expensive X-Type might be the better Jaguar starter car.

By Jaguar's own admission the XF is a modern interpretation of the firm's luxury trademark designs and implementations. Certainly all the materials are convincing, as is the overall build quality. Image-wise the brand has suffered for being perceived as attractive to mature motorists. With modern styling and technology, the XK coupe and XF have been designed to change this perception.

The XF's rakish profile might look good but the compromise is that rear cabin access is a little compromised if you're large or tall. For most people it will be fine, but that sloping roof does impact on rear headroom, and the car's rear doors could be larger - to better aid access and egress. At the rear, the car's boot is a good size for a modern Jaguar, although the boot aperture is on the small side.

Standard fit is a well specified system boasting all the usual premium refinements. Along with steering wheel and fascia controls, the car's colour touchscreen is the main control. Sound quality is excellent, and depending on model and options selected, a more powerful amplifier, more speakers and full control of a connected iPod can be experienced.

Most exterior colours work well - especially the lighter hues, although green is a little too bright and less than flattering. Complimenting the exterior colours is the subtle use of chrome highlights for the grille and other areas. Inside, the refined ambience is topped off by the measured use of wood and silver trim.

Although big, in principal the XF is a straightforward car to park and manoeuvre. The steering is light and accurate at low speeds, and the visibility forward is good. The view aft could be better, though; the rear screen is small and the rear head rests and high level brake light restrict what you can see. The parking sensors do work well, and make life easy once you're acclimatised to the car's dimensions.

Repair kit fitted to base car with 17-in wheels, larger wheeled cars get space saver as standard.

Audi A6 Outstanding build quality and good choice of engines; easy on the eye