Bigger grille and alloy wheels mark out the 100HP 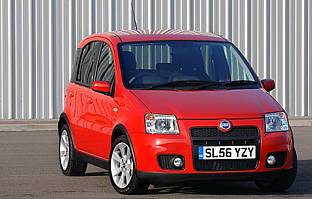 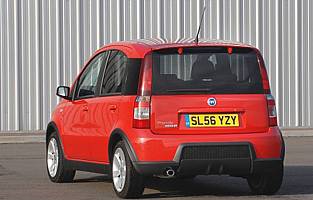 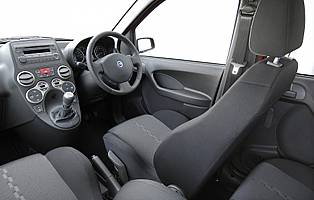 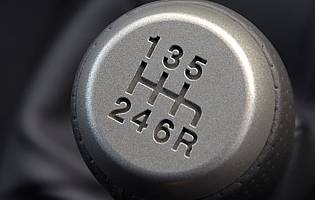 Fiat has a long history of producing small cars with a big punch, and the Panda 100HP is no different. Designed to offer all the practicality of the regular car but with an added dose of fun, the 100HP offers performance on a budget.

The regular Panda is well established in the small car sector, and its unique style and practicality alongside its Italian charm has seen it win many fans. It is also one of the best value superminis around. The range has been completed with the introduction of the 100HP, sitting at the top of the tree as the performance model. Despite this, it remains within reach of supermini buyers thanks to a low price tag.

From the outside the 100HP is instantly distinguished from regular Pandas thanks to a number of enhancements. Most notable are the bigger 15-inch alloy wheels, body styling which incorporates bigger bumpers, side skirts and a chunky rear spoiler mounted on the roof. It also wears a subtle 100HP badge on the bootlid, and although relatively minor, it looks much tougher and smarter than a regular Panda without losing any of the original charm.

Mechanically the 100HP is similar to other Pandas in the range, although it does benefit from a unique drivetrain. The 1.4-litre petrol engine is borrowed from the bigger Grande Punto, and despite the modest output is sufficient to give the Panda a good turn of speed. To get the best from the revvy engine, a six-speed manual gearbox is fitted, again something which is not seen elsewhere in the Panda range. These factors help to give the 100HP true junior hot hatch status.

There are other changes to distinguish the 100HP from its counterparts and improve the driving experience. The brakes have been increased in size to cope with the extra power, while the suspension has been lowered and stiffened for increased grip and reduced body roll. Inside the 100HP gains extra equipment, including Bluetooth phone connection, leather on the steering wheel and gearknob and sports seats.

Our verdict on the Fiat Panda 100HP

As a junior hot hatch, the Panda 100HP really hits the mark. It is great fun to drive, having a decent turn of speed rather then being really fast. This makes it easier to enjoy, as well as being cheaper to buy, run and insure. It also retains all the practicality of the standard car, and represents a real bargain.

Running costs for the Panda should be very good indeed, thanks to the low insurance group, purchase price and good fuel economy.

The Panda remains a very practical car, and makes use of as much cabin space as possible within its compact dimensions. Front seat room is good, rear seat room understandably is less generous, but still suitable for adults, while the boot is short but usefully deep.

The cabin layout is simple and refreshing, with a high mounted dash including the high set gearlever. The dials are attractive and sporty yet easy to read, and the buttons and switches are clearly labelled and easy to use. Only the column stalks are a little confusing at first, but become much easier with familiarity.

Despite the sportier suspension the Panda rides well, and copes admirably with bumps for such a small car. The engine is sufficiently quite too, only becoming noisy when revved, and wind noise is well controlled.

The 100HP is fitted with remote central locking as standard plus an engine immobiliser, although no alarm system is fitted.

Standard safety equipment is good on the 100HP, with twin airbags and ABS fitted. ESP is available as an option, as are side and window airbags, all of which come at a reasonable price.

The appeal of the 100HP comes from its fun factor. Being quick rather than fast and avoiding too much grip, the balance and handling sharpness of the Panda can be exploited at reasonable speeds. That makes it easier to enjoy more often. Yet it can also cope with the city and motorways with ease, providing reasonable comfort and noise levels.

The Panda could also serve as runabout for smaller families, thanks to its space efficiency. It is possible that it is physically too small to carry more than two children and adults plus their luggage, but this excepted it is very capable within its limits.

The 100HP would make an excellent first car, with the image and performance that would appeal to many, but not being too quick for inexperienced drivers. It also delivers good economy, and the low insurance and running costs make it ideal for new drivers.

Despite its low price tag, the quality of the Panda is good. The cabin materials are of a good standard, quite possibly above the standard expected of a car under GBP10,000. Its image is also notably different from that of the regular Panda, as it trades on the Fiat history of small fast cars.

Getting into the Panda is fine for average sized people, though due to its diminutive stature the doors are relatively small. Taller adults might find it a little more awkward, but given the car's dimensions this is to be expected.

The standard stereo system is a radio/CD with MP3 playback facility, and it is mounted high on the dashboard for ease of use. It also has steering wheel controls and a clear display.

The Panda 100HP is offered in four exterior colours, all of which do well to highlight the styling changes and give it the aggressive look of a hot hatch. Inside the cabin is mostly grey, although the seat trim looks and feels good quality.

The Panda is a joy to park, thanks to its compact dimensions, square body which makes it easy to judge the car's extremities and the power steering, which is extra light at very low speeds. The Panda is certainly one of the easiest cars to park currently on sale.

Ford SportKa Ageing but still a great car to drive

Mini Cooper A little more powerful than the Panda, but also more pricey when options are taken into account