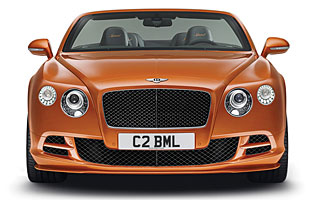 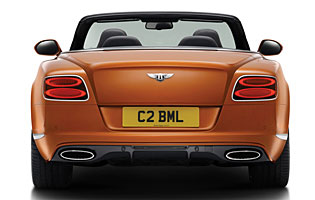 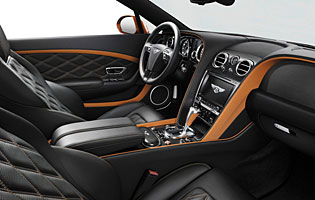 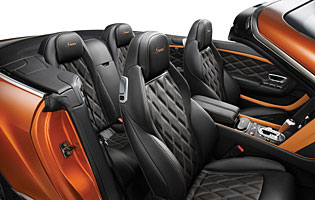 In the quest to satisfy some of the most discerning customers at any price, Bentley continues to offer yet more variants of its core model, the Continental GT. Combining the drop-top roof of the Convertible model with the extra power of the Speed version, Bentley has created the GT Speed Convertible and with it one of the world's fastest convertibles.

The starting point for the GT Speed Convertible Speed is the standard Continental GTC, one of the few large luxury convertibles on the market. Primed for performance and long-distance cruising the Continental offers seating for four but with an emphasis on the front passengers. The GT Speed adds a wire mesh grille, unique alloy wheels and a subtly altered bodykit, and is a significant upgrade of the standard car.

Mechanically the GT Speed Convertible uses the same four-wheel drive transmission to handle the high output engine, a W12 unit of 6.0-litres and twin turbochargers. However, a small number of detail changes to the engine push the power and torque figures up substantially, with a significant effect on top speed and acceleration.

Despite a substantial kerb weight and the fabric folding roof, the hugely powerful engine means the GT Speed Convertible is one of the few drop-top cars capable of reaching 200mph and beyond. Because it also offers the security of four-wheel-drive it remains driveable in poor weather and ensuring comfort for the driver and passengers.

In keeping with the Speed's more focussed approach it comes with a number of mechanical enhancements. The electronically adjustable suspension has been recalibrated for the GT Speed Convertible, it rides a little closer to the ground and also has retuned steering to offer better feel for the keener driver.

Our verdict on the Bentley Continental GT Speed Convertible

Very few cars can offer such a heady combination as the GT Speed Convertible; comfort, luxury, performance, style and fresh air. There are compromises, not least the huge expense of purchasing and running one, and the rear seats would be too cramped for taller passengers. Yet it is in a class of its own, and will be the first choice for many luxury car buyers as a result.

Running costs for the GT Speed Convertible will inevitably be high, thanks to the thirst of the 6.0-litre engine, high insurance costs and the price of servicing. Its high carbon emissions will also put it in the highest bracket for excise duty.

For a car of its size, the GT Speed Convertible is relatively inefficient in its use of space. The cabin is cosy rather than spacious, although there is no shortage of room for front seat passengers. There are a handful of storage spaces in the cabin and the boot is usefully large.

The layout of the GT Speed Convertible is highly impressive, with attractive yet clear displays, well labelled switches and controls and excellent graphics. The major controls are also well designed and easy to manipulate, adding to the relaxing nature of the driving experience. The sat-nav system needs updating however, as its graphics and functions are now relatively old.

The level of comfort on offer in the GT Speed Convertible is very impressive, from the supportive seats and the relaxed cabin to the low wind and engine noise levels. The adjustable suspension settings also allow the driver to set the car to their own preferences. Passengers in the rear are less well catered for, although the use of individual seats does improve the amount of support.

A desirable car such as this needs protection, and the standard alarm and immobiliser system should prove sufficient to prevent most thieves. The optional tracking system is highly recommended.

A high level of active and passive safety system are fitted across the Continental GT range, aided by the standard four-wheel drive system. Standard ESP and ABS systems are backed up by airbags throughout the cabin and a strong safety cell.

Families with older children could use the GT Speed Convertible on a regular basis, although they might tire of clambering into the back seats. For smaller children the two-door configuration is likely to prove too much effort to deal with.

The GT Speed Convertible is out of the range of first car buyers, and its performance and costs would be prohibitive.

The quality of the GT Speed Convertible is superb throughout and is in keeping with standard that Bentley customers would expect. The same continues when you step inside, and the GT Speed Convertible feels hand made rather than mass produced and is a testament to the craftsmanship in Crewe. The image of the Speed is almost as strong, taking the peerless Bentley image and making it more accessible. The extra kudos of the Speed tag above the standard car also seems to hold significant sway; many customers actively seek the most expensive version available.

Access to the front of the GT Speed Convertible is straightforward thanks to the long door on each side with a very wide opening. It's a bit more of a challenge for those getting into the rear however, even though the seats slide forward the remaining aperture is relatively narrow. It's a lot easier with the roof down of course. The boot has electric operation and has a broad opening, but with the optional upgraded audio system some space is lost.

As standard the GT Speed comes with a high specification audio system, with the option to upgrade to the bespoke Naim system. The sound quality is exceptional, however the sat-nav and surrounding systems are now feeling a little dated compared to some rivals.

The exterior of the GT Speed Convertible is available in a variety of shades ranging from the lurid to the conservative, and helpfully Bentley dealers are only too willing to guide potential purchasers. On the inside the materials are of a very high standard and there are a wealth of options for colour matching and stitching to suit any taste.

The GT Speed Convertible is relatively straightforward to park for a car of its size, but it is worth bearing in mind that visibility is reduced with the roof up which can make a big difference. Standard fit parking sensors front and rear are a big help however.