Touran has been treated to a comprehensive facelift 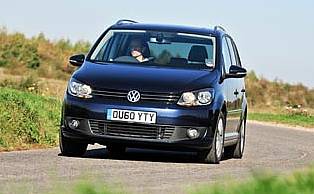 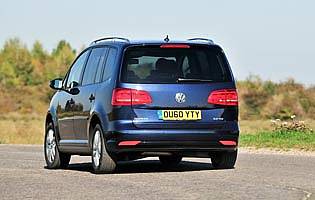 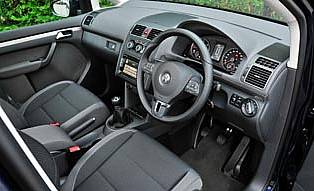 Volkswagen's Touran has historically been unfairly overlooked due to its conservative styling. It has never been short of practicality or quality, however. Nonetheless, it has been treated to a comprehensive facelift in order to raise its profile against more popular rivals. There's also a greater focus on economy.

It might have entered the compact MPV market later than some rivals but Volkswagen's Touran was, from the start, a solid and competent performer. The cosmetic changes bring it into line with the rest of VW's range while the subtle mechanical revisions boost its economy and drivability credentials.

Stepping inside the Touran, higher quality trim materials are used throughout, a smart three-spoke steering wheel inherited from the Golf is standard and the main instruments are backlit in white, all of which helps to maintain the classy feel that is expected of a modern day Volkswagen.

In contrast with the visible exterior changes, the mechanical changes are more subtle. One notable inclusion is a 1.2-litre TSI petrol engine, which boasts a good balance of power and economy. Diesel variants are still very much the focus of attention, and with VW's Bluemotion Technology package offering fuel saving engine stop-start and other clever tricks it's easy to see why such engines are popular.

Our verdict on the Volkswagen Touran S 1.6 TDI Bluemotion Technology

There was never anything wrong with the Touran but the cosmetic enhancements and subtle improvements to the engine range all add up. The end result is a more appealing car without sacrificing the practicality that made the previous model so attractive. Some rivals might offer more driving fun but the Touran is a nicely-rounded and appealing package.

On paper the Touran is a sensible purchase. Fuel economy is good (particularly with diesel models) and Volkswagen has a tendency to ensure its vehicles achieve competitive insurance groupings. The level of standard equipment is also good, which should mean less need to browse the options catalogue.

With the Touran capable of accommodating seven occupants, its size belies its carrying potential. Predictably, the front two rows are extremely spacious but the third row is inevitably less accommodating. However, for occasional use it is more important that they stow neatly and quickly in the floor, which they do. And being a family-orientated car, there are lots of useful storage areas throughout the cabin.

The Touran is just like every other Volkswagen in this department. The car's simple yet effective and easy to use cabin is a major plus point, while the commonly used controls are easy to master.

Standard equipment levels have been improved as part of the model's refresh, and features such as heated electric door mirrors, hill hold function, cruise control and alloy wheels have become increasingly widespread. Low noise levels in the cabin, plenty of space and supportive seats are all contributing factors.

Although not what you would call a high desirable car like a more valuable SUV, the Touran does come with all the expected security measures such as remote central locking and engine immobiliser, while an alarm as standard on high-spec variants. The car's sturdy rear load cover ensures valuables are always out of sight.

Mirroring the commitment put into every other VW, the Touran's safety provision is comprehensive. All models gain ABS and ESP with traction control, four airbags in the front as well as curtain airbags down both sides and three-point belts in all seats and Isofix mounting points amongst other features.

Despite all the MPV and family-orientated connotations, the Touran delivers a pleasing driving experience. The 1.6-litre TDI model tested here is no slouch, and although it requires exercising to extract the maximum performance, it's worth the effort. The accurate steering, slick gearchange and lack of bodyroll for a tall car make it a pleasing drive whatever the purpose.

The car's wide door apertures will certainly be a plus point, while the ease of folding the seats up or down makes it a car that can switch roles easily between family wagon and load-lugger. The plush but tough-looking interior should cope easily with everyday knocks, too.

It's unlikely that a novice driver will need or want the space the Touran offers straight away and would be better served by something smaller and more affordable from the Volkswagen range. That said, the Touran is an easy car to drive.

The Touran feels like an expensive product from nose to tail. Image is perhaps more of an issue: although the VW badge carries its own kudos, within the range the Touran is seen as much less a model in its own right compared to Polo, Golf or even Touareg.

With its high roofline and large doors, getting in and out of the Touran is a cinch for front and rear passengers, even the tall or the less able-bodied. The same goes for the boot, which has a wide and square tailgate for easy access.

The base spec doesn't call for buyers to slum it. All models get a factory-fit stereo with CD player. The possibilities for customising the Touran's in-car infotainment systems include a touch-screen satellite navigation, MP3 player and Bluetooth phone connectivity.

Despite the facelift, the conservative looks of Touran are best served by more sober shades, although solid colours such as red and blue also look good. The cabin trim is largely of a very good quality; looking and feeling more expensive than it really is.

With its lofty driving position and large mirrors, parking the Touran is a straightforward exercise. Adding to this is the optional ParkAssist technology, which uses a series of sensors to plot an ideal path into a parallel space. Once engaged (a simple push button located next to the gearstick), the system carries out the steering inputs necessary, while the driver controls the throttle and brake.

Citroen C4 Picasso Not as good to drive but well-equipped, stylish and boasting a spacious interior