LED running lights are a feature of Golf R 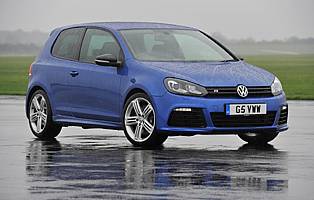 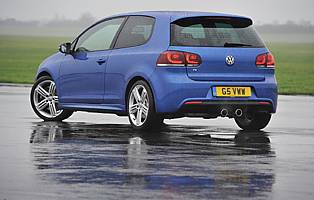 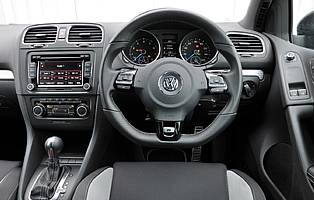 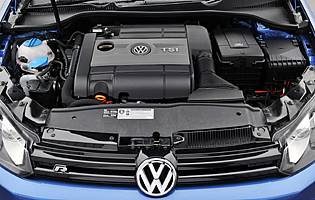 Designed to compete with premium-badged cars rather than conventional hot hatches, the VW Golf R could be described as a super hatch. Based on the conventional and popular family car, the R receives a number of visual and mechanical enhancements, increasing its performance as well as its desirability.

With the capable GTi as a stablemate, VW has worked hard to create a sporty feel with the R while giving it a different look to its sibling. The bumpers, front and rear lights, sill extensions, wheels and mirrors all differ from any other Golf variant. The wide-mouthed front bumper links it to the Scirocco coupe, while at the rear the twin tailpipes have become something of a signature for R-badged models.

Inside the R is more similar to the conventional Golf, although again there are some distinguishing features. Standard climate control is a useful addition, while the smart flat-bottomed steering wheel first seen on the GTi is also fitted to the R. Chequered aluminium-effect trim is used on the centre console and the door panels, while metal pedals with grips in the shape of the R logo are good to look at and to use.

Although the 2.0-litre turbocharged direct injection petrol unit under the bonnet is similar to that found in the GTi, here it has considerably more power and torque and is transmitted to the wheels through a four-wheel drive system. Remaining front-wheel drive most of the time, the system automatically diverts power if sensors detect a loss of grip, which results in power being transferred to the rear wheels without any driver intervention.

Available in three and five-door specification, the R is also available with an innovative DSG (direct shift gearbox) transmission, which uses two clutches to provide seamless gearchanges even under hard acceleration. In this application it also comes with paddles mounted on the back of the steering wheel, allowing the driver to shift manually without touching the gear lever.

Our verdict on the Volkswagen Golf R 5-door DSG

The Golf R beats the performance of the outgoing model while improving on economy and emissions. It provides high levels of comfort and ease of use despite its athleticism, and although the loss of the six-cylinder soundtrack is a shame, it is a more practical car overall as a result.

The initial purchase price of the R could be considered high for a vehicle that is based on a family hatchback, but the amount of standard equipment and the high specification justifies the price. Running costs will be relatively high however, with fuel economy and insurance costs the biggest factors.

The R is just as practical as a regular Golf, with good levels of head, leg and elbow room for front and rear passengers. There are also useful storage areas throughout the cabin. Due to the four-wheel drive layout, the boot floor is higher than on a regular Golf and therefore boot space is slightly reduced, though it remains a good size.

The layout of the R's cabin is clear and simple, with well-marked buttons and switches. Additionally the R gets smart illuminated instruments with blue needles, which look classy and are very clear. The information display between the instruments is also clear and informative.

Excellent standard sports seats give a high level of support, and neither wind nor road noise is likely to disturb passengers. The firm suspension means that the ride quality on broken roads can be a little bumpy, but this never becomes a major discomfort.

As the R is such a desirable car, it is fitted as standard with remote central locking and an alarm system, which should deter the most determined thieves.

A considerable safety equipment list including front, side and curtain airbags gives the R a high level of passive safety, while the four-wheel drive system improves safety levels in slippery conditions, a useful advantage over two-wheel drive rivals.

With a weight penalty due to the four-wheel drive transmission and large capacity engine, the R is not quite as agile as the Golf GTi. However, the trade-off is superior poise and stability, as the 4MOTION system delivers the impressive power to whichever wheels have the most grip. In all conditions it feels planted on the road and it has huge reserves of grip and balance. The effortless nature of the DSG transmission and the flexibility of the engine makes the R a highly enjoyable car to drive and it covers ground rapidly and with great ease.

A key strength of the R is its ability to combine performance and practicality and it could easily provide excellent family transport. There is sufficient passenger and luggage room and it has the ability to cover distances with ease and in comfort.

Although not a challenging or intimidating car to drive, the R's performance and expense would make it largely unsuitable for new or inexperienced drivers. The high insurance group would also put it beyond most drivers with no performance car experience.

VW's reputation for quality is maintained in the R, with high standards of fit and finish throughout. A strong sense of good design is also evident, giving the R an aura of high quality. The R's image is also elevated above that of the GTi,and the relative rarity and specification of the car gives it an enviable reputation amongst its rivals.

In five-door form the R is a simple vehicle to enter and exit from for both front and rear passengers. Wide door openings and 'suitcase' door handles are a big help, as is the relatively high roofline.

A standard radio and combined CD player is fitted to the R, which is simple to operate and provides clear reception and good CD playback, with strong bass and a powerful output. Controls on the steering wheel and a display between the instruments also make the unit easy to operate on the move.

Although much of the interior is identical to that of a regular Golf, touches like the smart steering wheel, leather trim and flashes of aluminium-effect detailing make the interior feel good. The fabrics and plastics used within are of a high quality and a robustly constructed.

The R is no more difficult to park than a regular Golf, with only the thick rear pillars that restrict vision slightly worth noting. Rear parking sensors are also available as an option.

BMW 130i Superb engine and chassis in 130i guise, cramped rear seats and expensive