New nose is most obvious change to the Golf 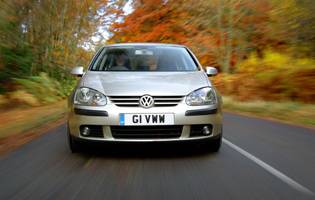 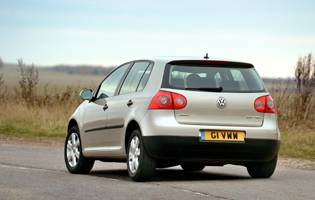 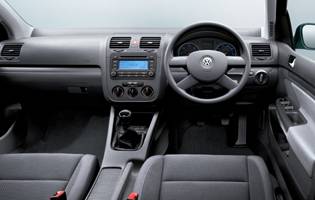 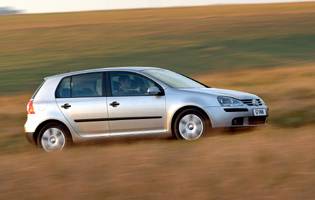 The fifth generation of one of Europe's favourite hatchbacks has its work cut out if it is to maintain the model's popularity, due to the increasingly stiff competition. Volkswagen has concentrated hard on improving the general drivability of the car and bringing the styling up to date.

One of the hardest remits faced by any car manufacturer is that of updating a well-established model. The changes have to be substantial enough for people to want to make the change, without being so drastic so as to scare off any lifelong fans. Whether Volkswagen has managed to walk this particular tightrope is a matter of personal opinion.

What is beyond debate, however, is the fact that the Mark V's handling has been much improved, so as to compete with its archrival, the surefooted Ford Focus. Its electro-mechanical power steering system adjusts the level of the assistance according to how quickly you are travelling (light at low speeds and heavier for motorway manoeuvring).

The integrated grille and almond-shaped headlights give the Golf a sleeker Mediterranean appearance similar to that seen on SEAT and Fiat models. This is a marked improvement on the previous generation's portly, Teutonic nose. Interior plastics are a bit of a let down, but only because build quality expectations are so high where Volkswagen is concerned.

An impressive choice of powerplants is on offer ranging from a 1.4-litre petrol to a top of the range 2.0-litre GT TDI. The 'hot hatch' GTI model will keep the more performance orientated motorists amused.

Our verdict on the Volkswagen Golf 1.9 TDI SE 5-door hatchback

One of the original hatchbacks, the Golf looks like remaining firmly at the top of its game. Obvious interior cutbacks are more than compensated for with improved handling and performance. There still isn't a more desirable hatchback on the market.

The Golf is expensive in its class, but given Volkswagen's fabled residual values, the extra expense is almost certainly justified. The 1.9-litre TDI's combined consumption figure of 53.3mpg means affordable fuel bills. All models fulfil EURO 4 emissions criteria and the 1.9-litre TDI, for example, has a VED Band A rating giving good Benefit in Kind tax breaks for company car drivers. Insurance group ratings range from 4E for the 1.4-litre petrol S up to 13E for the 2.0-litre GT FSI petrol. A three-year/60,000 mile warranty comes as standard.

Boot space is ample at 350 litres (1,305 litres with rear seats folded). A low floor and high parcel shelf provide room for a couple of suitcases or several shopping bags. Rear seats are fully adjustable and folding and feature a small middle segment, which can be folded down separately to accommodate a pair of skis or flat-pack furniture.

Volkswagen's red and lilac dashboard lights continue to impress with their soothing ambience. Speedo and rev counter are both clearly visible behind the three-spoke steering wheel. The floor-mounted accelerator pedal is comfortable to use, particularly over longer distances. Controls for the climate/air conditioning would benefit from being simplified, however.

Ride comfort is acceptable as the car's suspension configuration is stiff enough to afford good handling without sacrificing ride quality. Road noise is audible however, and the diesel engines are vocal both at idle and when pushed hard.

All Golfs feature an immobiliser and remote control central locking as standard, which may come in handy given the Volkswagen badge's popularity among the criminal fraternity. On SE models upwards an alarm featuring advanced interior protection system is fitted. All models with alloy wheels gain anti-theft locking wheel nuts.

GTI versions promise to keep the performance-minded buyer interested. However, 2.0-litre FSI/SDI and GT TDI models are more than capable of raising a smile due to their impressive acceleration. The electro-mechanically assisted steering set-up is responsive and makes cornering both enjoyable and safe.

With five sensible seats and plenty of stowage space in the boot and the cabin's various cubbyholes, the Golf will make a good family car. The street-cred that comes as standard with the Volkswagen badge will make it an attractive proposition to the younger family unit, although those with more than two children would be best advised to plump for an MPV. The fabrics used on the seats feel durable and up to the task.

Most image-conscious new drivers would be more than happy with the Volkswagen's sleek looks and ever-trendy badge. However, the price tag and servicing costs will put paid to many a teenagers' ambitions.

Few other mainstream car manufacturers have such a perceived reputation for quality and reliability as Volkswagen. The Golf does little to tarnish this and in many departments enhances it still further. That said, the manual sliding mechanisms for the seats feel plasticy and cheap, as does much of the material used for the dashboard and trim. But these are merely minor blemishes in what is otherwise a solid performance.

The Golf's elevated seats and ample leg and headroom make access to the front and rear of the cabin easy and dignified. Three children will fit comfortably on the backbench as will three medium-sized adults. The Golf is likely to appeal to young people, image-conscious family drivers and more mature motorists looking for a civilised and engaging drive. The manoeuvrability of the front seats and steering wheel ensure that a comfortable driving position is easily attainable.

Base models come with a six-speaker CD/Radio player with trim levels further up the range gaining an extra four rear speakers. All stereo units are fully integrated and positioned high up on the dashboard. The big buttons and neat layout make it an easy to use system. A six-disc CD changer, which fits neatly into the armrest at the front of the car, is available with satellite navigation as an option.

The sleek contemporary lines of the Golf are best complemented in either Costal Blue or Silver paint. The Anthracite-coloured cloth available for the seats of all models is subtle, stylish and feels hard wearing. The plastics used on the fascia and interior are a grey-blue colour and have leather-effect dimples, making it look slightly cheap and feel unwelcoming to the touch. Leather seats are an option on SE and GT FSI/GT TDI models but not the bottom of the range S. A leather steering wheel is available as an option on all models (standard on both GT variants).

Parking sensors are only available as an optional extra. However, despite the Golf's increased proportions, all round visibility is good and the speed-variable steering make it nimble and easy to park.

Audi A3  upmarket stablemate to the Golf