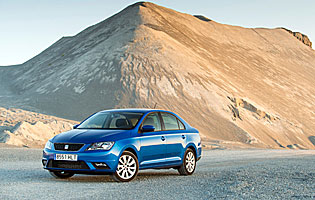 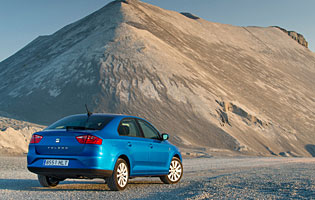 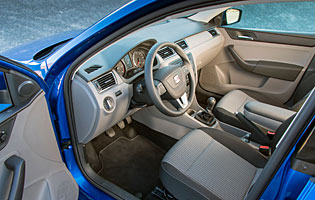 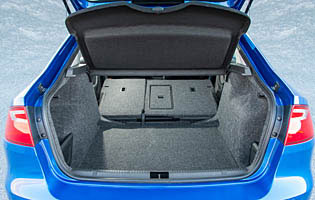 Spanish car manufacturer Seat has been enjoying something of a purple patch in recent years, buoyed by a broadening range and the benefit of the latest technology shared amongst VW Group vehicles. Now the range has been expanded further by the introduction of the third generation Toledo, which sits between the Ibiza and Leon hatchbacks.

Previous generations of the Toledo have been relative bit players in Seat's portfolio compared to the very popular Ibiza and Leon models, and although the same is likely for this latest Toledo it is clearly designed to have more mainstream appeal. Being part of the Volkswagen group has given Seat the freedom to be bold in terms of its design as well as diverse in respect of mechanics and model range, and the Toledo occupies a segment with few obvious rivals.

Slightly longer than the Ibiza on which it is based, the Toledo has the appearance of a saloon with an obvious -three-box' shape incorporating the extended rear of a typical saloon. However the Toledo is in fact a hatchback, and when raised the tailgate opens upwards and incorporates the rear screen right up to the edge of the roof to give a wide opening. The combination arguably gives the Toledo more grace and style than a conventional hatchback but with comparable space.

Underneath the Toledo is virtually identical to the Ibiza hatchback, although there are some detail changes in the car's structure. Most significantly the Toledo has a stretched floorpan that makes it significantly bigger than the Ibiza and comparable to the Leon from the next class up. The upshot of this is a high level of practicality, with a substantial boot combined with impressive rear seat space.

Mechanically the Toledo is offered with a slimmed-down choice of engines and gearboxes compared to the Ibiza model, reflecting the car's bit-part nature. In the initial line up at least there are no high performance models and the range-topping version is the 1.4-litre TFSI petrol unit matched to the seven-speed DSG dual-clutch gearbox.

A stylish car with a value for money price tag, Seat's Toledo offers buyers a refreshingly honest alternative to mainstream family cars. With its modest choice of engines and equally modest equipment levels, there's no chance of the concept being oversold and buyers being disappointed. What the Toldeo does is deliver honest, straightforward motoring with a stylish twist.

Running costs are a strong point for the Toledo, as it is competitive on initial purchase price and also comes in many variants with impressive fuel economy and low emissions.

The Toledo is at its strongest here, with good passenger accommodation front and rear added to the impressive load area. Although cabin storage is average, overall the Toledo manages to pack a lot of space into a modestly-sized vehicle without an obvious compromise in the exterior design - not something that could be said of an MPV.

The layout of the Toledo is very straightforward, with a clear set of instruments and simple controls. There are very few buttons to seek out and the majority of those are located on the centre console and are clearly labelled. The instruments are also a model of clarity and managed to look stylish at the same time.

Aside from a little wind noise at higher motorway speeds the Toledo delivers good comfort levels for a car in this segment. The seats provide a good amount of support although they are not heavily bolstered at the sides. Ride comfort is perfectly acceptable and there is generous glazing to allow plenty of natural light into the cabin.

Security measures on the Toledo are of a satisfactory level, with a standard fit engine immobiliser and remote central locking. Higher specification models also come with a factory-fitted alarm system.

The Toledo comes complete with a good level of safety equipment, with four airbags as standard on all models plus close attention paid to bodyshell stiffness and pedestrian safety. Additionally ESP is also standard across the range which is a huge safety boon.

Although it is typically seen as a sporty manufacturer, the Toledo aims for a more sensible and straightforward driving experience. Particularly in diesel form as tested here, it is a capable and easy-going car to drive rather than thrilling. The engine is reasonably smooth and tractable, the pedals are well-weighted and the gearbox operates in a slick fashion. When pressed the Toledo responds with consistency and measured responses, although it is best driven at a more leisurely pace.

Although still a relatively small car the Toledo could certainly provide practical family motoring, with space in the rear for children and all the cargo that goes with them. It could even manage to accommodate strapping teenagers in the back seats, something which many cars of this external size may struggle to manage.

As a first car the Toledo would do very well, providing an undemanding driving experience that would not intimidate an inexperienced driver. It also offers a relatively low-cost entry into motoring, particularly in terms of insurance and running costs.

In all guises the Toledo is clearly a quality car inside and out, with an impressive standard of build throughout. Although the cabin sticks to fairly dark plastics, all the switches and buttons operate with a reassuring solidity. The Toledo's image is more difficult to pinpoint, as Seat is generally a youthful brand but this tends to be associated with sporty hatcbacks. Although the Toledo is technically a hatchback it looks more like a saloon and is therefore more likely to be associated with less youthful buyers.

The four side doors give excellent access to the front and rear seats, especially given the relatively compact overall dimensions. Better still is the tailgate which opens high to give very good access to the impressive boot space.

All Toledo come with a good quality radio/CD unit. Sound quality is certainly respectable for a standard unit, and the standard auxiliary jack allows other audio sources to be played. A higher specification unit with sat-nav is also available, although this system is beginning to show its age.

The Toledo's exterior design works equally well with bolder colours or more sober shades, although the larger alloy wheels fitted to higher specification models are something of an essential purchase to avoid it looking a little weedy and under-tyred.

The modest increase in length over the Ibiza does little to alter its manoeuvrability and so it is a relatively straightforward machine to park. Optional parking sensors make life even easier, although they are not standard on any model.

Ford Focus Benchmark for the hatchback class but not cheap