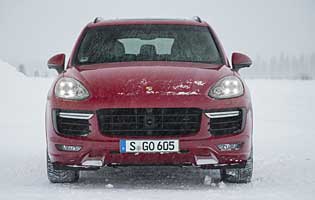 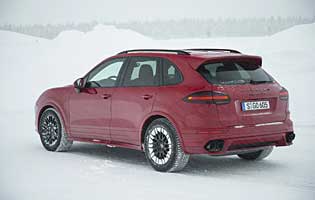 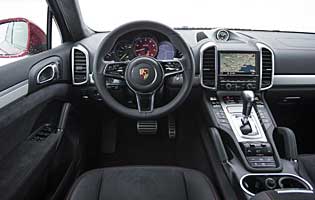 Fast becoming the must-have choice regardless of the model, Porsche continues the proliferation of GTS models with the introduction of the Cayenne version. With a new engine, revised suspension, unique exterior styling and many notable upgrades to the specification it represents a significant deviation from the Cayenne S upon which it is based.

Porsche's Cayenne has long established itself in the hearts of the buyers as well as in the range line up, and has put the initial doubters long behind. This second generation version is a much more cohesive product than the original car, while a recent facelift has brought with it some minor detail changes that have enhanced the overall experience.

In GTS form the Cayenne follows the same recipe that has been applied to other cars in the Porsche line up, and it sits in the range as the sportiest model beneath anything wearing a Turbo or GT3/GT4 badge. It's not hard to distinguish visually from the rest of the range either; GTS models gain a modest but attractive bodykit, finished in body colour, and wears dark alloy wheels that clearly set it apart from the rest of the range.

Mechanically this second generation GTS differs significantly from the first. As with many cars within its range and in rival products, large capacity naturally aspirated engines are being replaced with smaller turbocharged units, and so it is with the Cayenne GTS. It uses the same twin-turbocharged V6 unit as seen in the Cayenne S, but benefits from enhanced power and torque to give the required additional performance.

Elsewhere the GTS has a unique suspension tune, designed to give sharper handling over the standard car without dispensing entirely with its occasional off-road ability, as well as bigger brakes front and rear for improved stopping power. Inside there are standard electric sports seats, generous helpings of Alcantara and a high standard specification.

Our verdict on the Porsche Cayenne GTS

Like it or loathe it, it's difficult not to be impressed by a car as capable and effortless as the Cayenne. In GTS form it strikes an excellent balance between performance and comfort, and although the switch to turbocharging may be disappointing for the purist, the execution of the engine itself makes perfect sense on paper. It might be expensive to buy but there's no doubt you get a lot for your money.

With a car like the Cayenne GTS running costs are a relative concept. The asking price, as you'd expect, high and performance not saving money is often the primary attraction. The switch to turbocharging means it is more efficient that the previous model whilst offering more power, but it will still drink fuel if you exploit the performance. Insurance costs will be at the high end too.

The Cayenne might be a big car but the five-seat layout might prove disappointing for families seeking a seven-seat SUV. That said, there's ample room for five thanks to its wide dimensions and generous headroom. Oddment space is average for a car in this class, but at least the boot is a generous size and easily accessible - even more so with the rear seats folded.

If you like lots of buttons you'll feel right at home in the Cayenne GTS. Mirroring other Porsche models, the Cayenne's centre console boasts hard buttons for quick and easy direct access to most of the main features. To some this can look intimidating, but in Porsche's defence there's a certain logic to its approach. The car's touchscreen system is, in contrast, easy to master while the main dials are clear and easy to read.

Opting for air suspension delivers a more refined and versatile ride than steel springs. Aside from being able to lower and raise the car depending on the terrain, air suspension ensures a high level of comfort, plus it minimizes pitch and roll. The GTS is also fitted with electric sports seats as standard which offer outstanding support and comfort.

There's the usual array of airbags plus passive and active systems present here. What makes the Cayenne GTS special over a regular executive saloon is its intelligent all-wheel drive system. It's primarily a performance feature but this, combined with the various stability systems ensure that the big Cayenne can be driven with increased confidence in unfavourable conditions.

Although it is obviously a performance-biased car it will spend most of its life being driven in normal conditions, and helpfully the Cayenne GTS is well equipped to deal with them. The torquey engine and slick automatic gearbox work well together for seamless and fuss-free progress. Conversely it responds keenly to more vigorous driving, with ample performance, surprisingly sharp and balanced handling for a car of this size and impressive composure when pressed. It strikes an excellent balance between these two roles.

While the Cayenne GTS might, on paper, appear to be a smart choice its plush cabin is hardly child-friendly if you value the state of the upholstery. Where the Cayenne GTS will likely shine is with a more mature, teenage family demographic. There's ample space for shopping and activity-related belongings, and the car's off-road capability makes it an ideal companion for any weekend adventures.

Although the Cayenne is an easy car to drive at modest speeds, it remains a large and expensive vehicle and would be an unlikely choice for a novice driver - even if the running costs weren't a barrier to ownership.

Despite the critics the Cayenne has been a popular car from launch. The recent revisions have made it look less aggressive and more sports car like, which has also helped tone down its previously aggressive stance. For all that, for many buyers the combination of SUV looks and sports car performance has proven to be an incredibly tempting proposition.

Being an SUV, there is a noticeable step up into the cabin of the Cayenne. For the fit and agile it won't be a problem, but if it is there's always the air suspension option that can lower the car to a more sensible 'access' height. With its powered tailgate, rear load access is easy, although the deep boot does require you to stretch when reaching the items furthest away from you.

While the Cayenne's infotainment and navigation features are accessible through the colour touchscreen, they system is starting to show its age. Plus, some frequently used features are buried in the various menus. That aside, overall performance is good and there are ample audio source options to cater for most users.

Unusually the GTS wears brighter colours better than the rest of the range, chiefly because of the dark alloy wheels and the body-coloured lower sections. Even so, some of the brightest shades would only suit the bravest of souls. Inside the GTS benefits from lots of Alcantara, boosting the quality feel.

Despite its size the Cayenne is a surprisingly agile car, making it a straightforward experience when parking. The parking sensors help, as does the good all-round visibility thanks to the lofty driving position. It remains a sizeable vehicle, however, so spaces must still be chosen with care.

Audi SQ5 Diesel only rival is quick, comfortable and practical