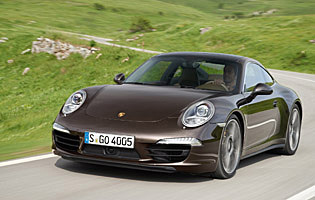 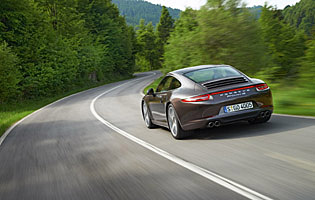 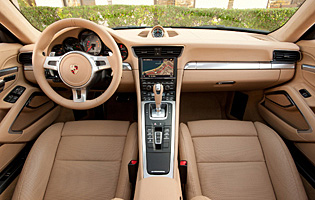 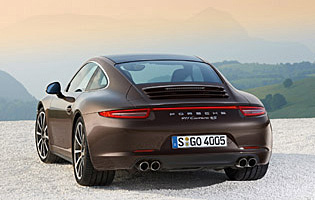 Even though the new 991-series Porsche 911 is only one year old, the variants continue to roll out of Stuttgart. With the Cabriolet already joining the Coupe, the German firm has now introduced the Carrera 4 and 4S models. With subtly altered styling and revised mechanicals, most notably the addition of four-wheel drive, the Carrera 4 variants offer a different proposition for potential buyers.

The key attributes of the 911 over the years have always contributed to it being one of the few supercars that can genuinely be used every day; compact size, discreet rather than outlandish exterior design and a usable cabin. Yet it has always been capable of delivering huge thrills in the right conditions. The continued success of the four-wheel drive version may be due to the further enhanced usability provided by the extra traction.

Visually the Carrera 4 is subtly altered compared to the two-wheel drive Carrera. Although there are no visual differences at the front, at the rear the bodywork is fractionally widened by 25mm - both to give a visual difference but also to accommodate the wider track on this model - and to cap it off the Carrera 4 has a unique graphic, with a line of LEDs that trace the outline of the rear lights and across the rear light reflector.

The four-wheel drive system itself is further developed over the outgoing model and has a number of features to improve traction and enhance the driver experience. In normal conditions the Carrera 4 runs in two-wheel drive with the power being sent to the rear wheels. If it detects wheelspin power is then diverted to the front wheels and can be adjusted front to rear to suit the conditions. Additionally the Carrera 4 can be specified with Dynamic Torque Vectoring which adjusts the power across the rear axle to maximise traction when powering out of a corner.

The interior is made from exceptionally high quality materials, although several of the trim options should be ordered carefully according to taste. The seats are supportive both vertically and laterally, and until cornering forces get very high they offer enough grip to allow the driver confidence to push harder. There is a great deal of technology in this 911, for both safety and luxury, but the options list is expansive too.

Our verdict on the Porsche 911 Carrera 4S

While purists may see the two-wheel drive 911 as the ultimate Carrera variant, the additional traction and stability that comes with the extra pair of driven wheels merely allows the driver to enjoy the performance more of the time and with greater security rather than detracting from it. In this guise it is truly a supercar for all seasons and as such is arguably the most complete 911 to date.

The main cluster gauges offers a thorough assessment of the car's condition, not just the normal aspects like oil and coolant temperature. A digital readout gives a wide choice of information to display, like the next sat-nav instruction, average fuel economy or even an instant G-force meter.

Thanks to advanced technical systems the 911 rides very well, offering well-controlled damping and balanced spring rates. A sports suspension option lowers the ride height by 20mm, which reduces the available suspension travel and increases harshness slightly, but the difference is small on the road. The seats are highly adjustable to suit a wide variety of heights and leg lengths, offering good support for occupants' backs as well.

All 911s are secured with an advanced immobiliser with an in-key transponder, an alarm and a radar-based interior movement detection system. Together they secure the doors, bonnet, ignition lock and passenger area to make sure any intrusion or use of force sets off the system. There's also a tracking system available on the options list which can locate the car in most European countries.

In many respects the Carrera 4 is the safest 911 of them all, blessed as it is with additional traction from the four-wheel drive system, Porsche Active Stability Management, big brakes and wide, grippy tyres. Should the worst happen a strong passenger cell and an assortment of airbags are in place to intervene.

In most conditions the Carrera 4 drives in a manner which is barely discernable from the two-wheel drive version - which is a testament to the quality of the engineering. Such is the subtlety of the four-wheel drive system that it's easy to miss its intervention unless you have the graphic display illustrating how the power is being split. The result is a car that can be driven with relative impunity despite the power available.

As a two-plus-two with child seat mounting points, Porsche clearly designed it to be used as a family car if an owner chose to do so. The long doors allow access to the rear seats more easily than might be expected, and the amount of legroom once seated is plenty for young children.

In spite of the 911's relatively easy-going nature, it is still too much performance and too much expense for an inexperienced driver.

The 911 is a remarkably successful car and has built up a large fan base worldwide, mainly due to the strong lineage of models over the decades and the purity of the final product. Its quality is beyond dispute, however, with luxurious materials and finishes throughout the cabin and the kind of precision engineering under the skin that you'd expect Porsche to give to its flagship.

As befits such an expensive car the standard stereo is very good and includes CD, radio, auxiliary and USB inputs. For extra power and a fuller, more balanced audio experience there is an optional Bose surround sound hi-fi system. Porsche's useful Communication Management system is standard on the Carrera S along with a satellite navigation system.

The 911 is bought by people from all sorts of backgrounds with a variety of tastes, and as such there is a wide selection of colours from the very obvious to the very subtle. Several solid finish choices are joined by metallic and 'special' paints, which cost extra. Inside the trim choices are exclusively subtle, but light and dark options are available and the quality is very high.

The variable power steering lightens enough to allow very easy manoeuvring, but the high dashboard, rear window and door shoulders reduce visibility. Excellent wing mirrors help when reversing, but long doors sometimes make it difficult to get in and out of the car in bay spaces.

An emergency tyre repair kit is fitted as standard.