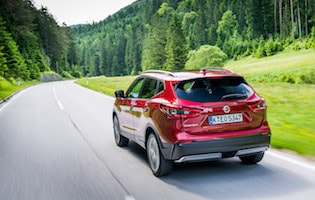 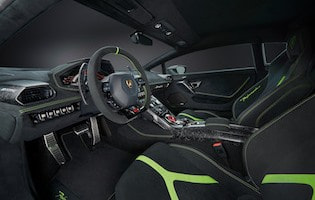 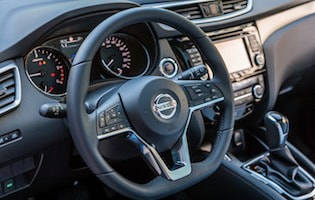 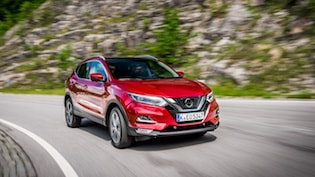 The Nissan Qashqai is a massively important car for the Japanese manufacturer, with around 2.3 million units sold since it was initially launched in 2007. It's the best-selling model Nissan has ever introduced to Europe, so there's understandably a lot of pressure being placed on this latest model.

At a first glance, you'd be forgiven for mistaking the new Qashqai for its predecessor. Exterior changes are subtle, but if you look closely there's a slightly redesigned front end, as well as new headlights and taillights. All up, these changes help the Qashqai look fresh and up-to-date with its rivals in this highly competitive market.

Inside, Nissan has also worked to give the cabin a more refined character. The new top-flight Tekna+ model adds features such as nappa leather seats with 3D quilting on the centre panels, and a premium Bose stereo system that has been designed specifically to suit the acoustics of the Qashqai's interior.

In addition to its grown-up looks, the Qashqai also feels impressively grown-up out on the road. Our test car was fitted with Nissan's punch 1.6-litre petrol engine, which develops 161bhp and 240Nm of torque. This is enough to propel the Qashqai to 60mph from a standstill in 8.7 seconds, and on to a top speed of 124mph.

The Qashqai is impressively comfortable out on the road. It doesn't crash around too much over rough surfaces, and although there is a fair amount of lean through the corners, it handles well for a car of its size. The seats are a particular high-light, striking a perfect balance between softness and support.

Our verdict on the Nissan Qashqai 1.6 Tekna 163PS

All up, the latest Nissan Qashqai remains the hugely competent car it always has been. It might not be the most exciting car in the world, but as a practical family runabout it certainly impresses. With that 1.6-litre petrol engine, it's also surprisingly brisk. Just like its predecessor, the new Qashqai will likely prove incredibly successful for Nissan.

Prices for the new Nissan Qashqai start at £19,295 for the entry-level Visia model with a 1.2-litre petrol engine, and move up to £32,530 for the top-level Tekna+ model with the most power diesel unit. The N-Connecta trim level, which is likely to be the most popular in the UK, starts at £23,805.

The Nissan Qashqai is a car that has been designed with family use firmly in mind, so it makes sense that it features a spacious and practical five-seat layout. Three children will be able to sit across the back seats with no problem, while two adults will also be able to sit there in comfort on longer journeys. Boot space is also impressive, with the Qashqai offering 430 litres of storage space, a figure that can be increased to 1,598 litres with the rear seats folded down.

The new Qashqai makes use of a redesigned steering wheel with controls for features such as the infotainment system and the cruise control. While the wheel might look quite cluttered at first, once you learn where everything is works far better than the system that was in place in the older Qashqai. The rest of the control are found on the dash, which does look rather busy. One again, though, when you learn where everything is, the layout is simple to navigate and also within easy reach of the driver.

The Qashqai's seats were, surprisingly, one of its stand-out features in our opinion. They managed the task of being both soft and supportive, meaning we didn't feel fatigued after spending a considerable amount of time behind the wheel. Its suspension set-up is also well-sorted, as the Nissan didn't crash about or feel too unsettled over poorly-maintained road surfaces.

As with any modern car, you shouldn't have too much to worry about as far as vehicle security is concerned. There's central locking, and an immobiliser to help keep unwanted people out of the car, and thanks to the fact that the Nissan badge doesn't quite carry with it the levels of desirability as BMW or Mercedes might, it shouldn't attract too much attention when parked on the street.

While the Qashqai isn't exactly a car that you yearn to get out and drive, it still handles itself in an impressive manner when you're out on the road. The 1.6-litre petrol engine fitted to our test car was surprisingly punchy and was able to get the Qashqai up to 60mph from a standstill in 8.7 seconds – not bad for a car of this size. It might not be amazing through the corners, but out on the motorway it makes for a comfortable cruiser.

It would be a bit tricky to pitch the Qashqai as a first car for a young, new driver. Sure, the wide range of safety equipment will likely appeal to protective parents, and the raised driving position will no doubt be popular with inexperienced drivers, but the Qashqai will likely be too expensive for most. A new Nissan Micra would be a far more suitable choice as a first car.

Nissan is hoping to move the Qashqai towards the more premium end of the market, and has introduced the new Tekna+ trim level in order to help it achieve this goal. This grade adds features such as soft nappa leather seats with 3D quilting on the centre panels and the Bose premium sound system as standard. The new Qashqai may not look too different from the old model, but the subtle changes help keep the crossover looking fresh.

Thanks to its five-door layout and fairly tall stature, getting in and out of the Qashqai is never going to be too much of an issue. The door apertures open wide for easy access, and the boot even features a flexible load space. Only small children will likely require assistance when getting in to the Qashqai.

The Nissan Qashqai makes use of the Japanese manufacturer's NissanConnect touchscreen infotainment system, which is standard on N-Connecta models and above. This incorporates satellite navigation, DAB radio and Bluetooth connectivity to name but a few features. Nissan has also made a new premium Bose sound system available, which features incredibly audio quality and makes travelling in the car that much more enjoyable.

The latest Nissan Qashqai is available in a range of fairly subdued colours, as well as one or two brighter options. There's the whites, greys, silvers and blacks that you'd expect from any manufacturer, as well as a new Chestnut Bronze colour – which is actually brown. There are also two different shades of red, as well as two shades of blue. There are five different trim levels: Visia, Acenta, N-Connecta, Tekna and Tekna+.

While the Qashqai might not be a pint-sized supermini, its raised driving position and decent visibility out of the cabin mean that it isn't a terribly difficult car to park. Higher specification models also gain parking sensors, a rear parking camera and 360° cameras to make parking that much easier. The steering and pedals are well weighted, too, which is always a welcome feature when parking.