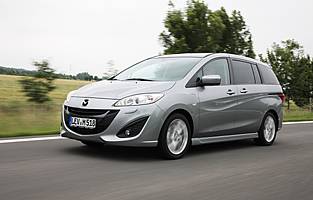 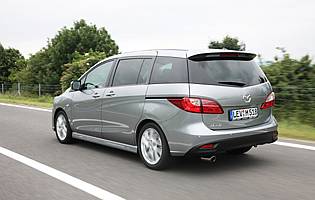 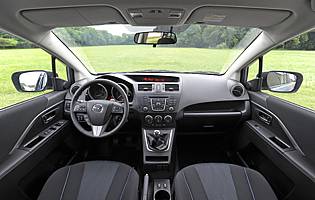 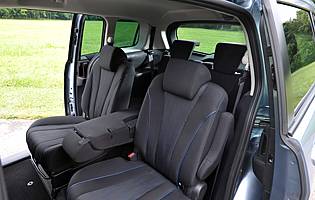 Mazda has taken its 'Nagare' influence of nature concept to the next level with the new Mazda5 seven-seat MPV, creating a flowing bodywork design unlike anything else in the segment. Despite the exterior changes, it remains functional family mini-van but with plenty of new refinements.

First unveiled in 2005, the Mazda5 was far from the first MPV to have been produced by the Japanese manufacturer, but its more contemporary design meant it was the best looking and one of the more dynamic examples in the segment. Sliding side doors and the extremely clever Karakure interior layout gave it an edge over its more traditional rivals.

The opposition has now caught up with its own adaptable interiors and sleek designs, leading Mazda to take the initiative on the exterior of the vehicle. Fully embracing its 'Nagare' ideas, with designs inspired by nature, Mazda has developed the new model to feature striking details in the bodywork and the flowing interior meant to represent the theme of ripples on water.

It's an eye-catching design that will certainly prove a talking point, but it shouldn't distract from other technical innovations within the new models. 80mm longer it boasts marginally more space and the same highly adaptable, multi-configuration seven-seat interior as the outgoing model. The body has been stiffened and the steering, braking and throttle response all tuned to offer greater linearity and refinement in combination with a smoother and quieter on road experience.

Two revised petrol engines offer improved economy and reduced emissions. Both the 1.8-litre and 2.0-litre units feature a six-speed manual transmission, but only the latter is available with Mazda's smooth i-stop system, that shuts the engine down to save fuel when halted, restarting it when power is required.

Our verdict on the Mazda Mazda5 2.0 i-stop

The exterior design may prove controversial, but there's little doubting the effectiveness of the improvements made to the refinement and driveability of the new Mazda5. The i-stop system is impressively effective and unintrusive while the on road experience as pleasing as the adaptable interior design.

Running costs have been improved with the addition of more frugal engines and the clever i-stop system. Mazda also claims that the new bodywork will be no more expensive to repair in the event of an accident than regular flat panels. As a result, insurance costs should not be too steep.

Though nominally a seven-seater, the Mazda5 is really a six-seater that offers an occasional seventh seat. This basic seat flexibility and convenience is the result of the Karakuri seating and storage concept, which can convert the vehicle from four to five to seven seats in a matter of seconds and without having to remove or add anything. A seventh seat cushion is stored under the left second row seat. After locking the wide armrest between the second row seats into the up position, the left hand seat cushion is tipped forward, the seventh seat flips out easily. If storage is a priority, a utility box can be folded out from below the right seat cushion using the same process. Storage is plentiful; there are numerous cubby holes and the glovebox holds 11 litres. Boot space is restricted with the rear row in place but remains adequate for day-to-day use.

The instrumentation was not the strong point of the original Maxda5 but was improved with the facelifted model and has been improved again in the latest version. It now offers a much clearer, more user-friendly layout with bright and easy to read dials and screens carefully positioned to benefit the driver in particular. Knobs have a quality chrome edging and the addition of a gear shift indicator helps lower fuel consumption. The gear lever positioning is excellent.

Decent standard equipment levels including air-conditioning and electric windows combine with the supportive seats and spacious interior to offer a very reasonable degree of comfort. Ride quality is also very good and the emphasis put on improving the linearity of the steering, braking and throttle response lends itself to a smoother, more relaxing feel on the move. Front seats are highly adjustable and the second row can be moved to increase legroom in front or behind. Improved interior refinement comes courtesy of noise reduction, too.

The security package provided is surprisingly generous. There's the expected immobiliser system but for even more theft protection, a Thatcham Category-1 alarm system is provided. This system has an intrusion sensor arrangement that detects break-in through the windows or other body openings and has a back up battery that runs the alarm, even if the main battery has been disconnected. An optional keyless entry and start system that employs a card-type key adds convenience. Masses of interior storage offers hiding places for valuables, too.

There are three-point seat belts and adjustable headrests at all seats, including the fold out seventh seat. Passive crash resistance has been improved with additional strengthening of the shell. Six airbags are standard as are front seat belt pretensioners, collapsible brake pedal, shock absorbing steering wheel and Isofix points in the second row. Mazda's brake override system prioritises the brake if pushed at the same time as the throttle and the auto sliding doors, where specified, are anti-pinch.

Mazda's engineers have been hard at work developing the chassis and steering of the new Mazda5, resulting in a stiffer body that responds better to driver input and offers a more secure feel on the road. The steering is noticeably more linear, which aids passenger comfort and requires less input from the driver. The 2.0-litre petrol unit is reasonably swift for a car in this category and the i-stop system is one of the least intrusive on offer.

The Mazda5 is clearly a vehicle aimed squarely at families, and with space to accommodate up to seven it makes perfect sense as a family vehicle. The adaptable seating layout can cope with growing families and all variety of related duties while safety and user-friendliness have also clearly been high on the list of priorities. Masses of interior storage and child-friendly features such as anti-pinch doors will be welcomed by parents.

MPVs of any description are way down the recommended list of first-time buys.

Mazda has made concerted efforts to improve materials and interior quality and it shows in more recent models. Build quality is also good, with no squeaks or rattles present on the road. The previous generation Mazda5 was on of the smartest MPV designs available. The flamboyant new exterior details will be judged in time, but are certainly likely to attract attention and are unique in the MPV sector.

The Mazda5's sliding side doors were a segment first when the car initially went on sale in 2005. Since then the opposition has caught up, but they continue to offer excellent access to the second and third rows of seats and are exceptionally easy to use in a tight space, particularly with the clever anti-pinch automatic versions fitted. These can be operated from the key fob. The one handed usability of the second row seat folding function also aids access.

Standard stereo equipment comprises a four-speaker system with a digital processor and auxiliary input. A six-disc CD changer is also available as an option as is a full sat-nav system with a six-inch display. An MP3 streaming facility is also available, as is Bluetooth and a system that optimises sound according to the interior arrangement. Sound quality form the basic system is good, with easy to navigate controls.

Because of the unconventional exterior design, Mazda has been careful to ensure that none of the eight exterior colour options create any optical illusions or unwanted reflections in the curvy bodywork. The exterior lines are more dramatic in some of the red, blue, white, black and grey shades available. Darker colours make them less visible. Clear Water Blue is the only new option. Inside, materials feel of good quality and the sweeping design of the front seat backs is a nice touch.

Rear parking sensors are an optional extra, which is a shame as parking can be tricky. The Mazda5 seems longer than it really is from the driver's seat, while the car's high waistline and thick rear pillars add to the challenge of reversing as does the additional eight centimetres in length over the old model.