Bold looks help Kia's Optima stand out from the crowd 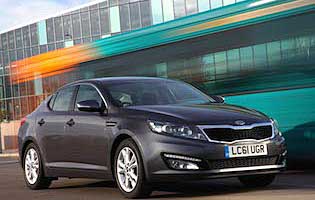 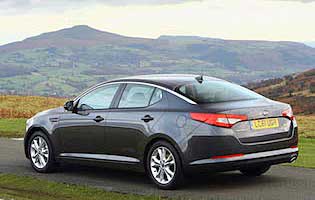 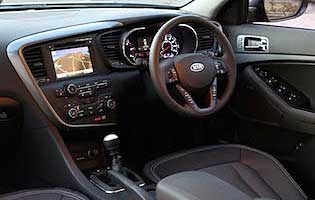 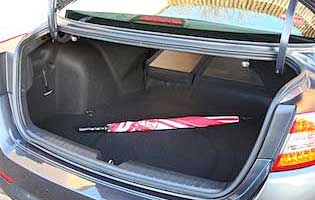 Keen to attract valuable business user custom, this latest Optima offers the standard template of medium saloon and diesel engine. Where Kia differs from the norm is with its generous levels of standard equipment, visually striking styling in an otherwise largely conservative market and, crucially, its seven-year warranty.

The sister car to Hyundai's i40, Kia's Optima differs in that only a saloon bodystyle is offered unlike both four-door and estate variants from Hyundai. The three-box design remains the traditional choice among business users at this price point and size.

Kia is also taking the unusual but pragmatic approach by only offering diesel power with its Optima. Thanks to less favourable tax incentives plus fuel economy and emissions performance, petrol power commands little interest in the company car world. Kia's choice of an in-house 1.7-litre unit delivers a reasonable blend of economy and real world performance.

In a bid to attract buyers away from other more established marques, Kia has fitted the Optima with a high level of standard equipment. A quality audio unit can be had with navigation accessed via a large, clear touchscreen. Bluetooth, cruise control, high power headlights and leather are also all available. In contrast, you'll have to pay extra for many of these items on so-called premium rivals.

If there's one thing that might count against the Optima it's the lack of a premium badge or any significant brand heritage. Status obsessed company car drivers are well known for aspiring to own cars from the major German brands, meaning the Optima - and Hyundai's i40 - could be unwittingly overlooked. However, for the more savvy buyers, the Optima's sensible asking prices and the reassurance of an class leading extended warranty should more attractive to those people responsible for signing the cheques.

You need to view Kia's Optima with a sensible, clear head; tis is not a car for keen drivers and it lacks a premium, sought-after badge. However, what it lacks in terms of brand appeal it compensates for with a value for money approach that's both refreshing and compelling. A long list of kit is backed up by a solid on the road performance, sensible economy and the peace of mind of an industry-busting warranty, making it a car the finance department will like.

With the promise of considerable savings over its more established rivals, the Optima is a car the cost conscious shouldn't ignore. In diesel only guise it proves to be reasonably economical, although while CO2 and tax levels aren't class leading the car still represents a good effort if you're a business user. Key to the car's appeal is likely Kia's generous seven-year warranty, something unmatched by its competitors.

Taller occupants should have little trouble getting comfortable in the front, while the rear of the Optima is similarly accommodating for adults. The saloon format boot is large and the loading lip isn't restrictive, while split folding rear seats allow for even larger objects to be accommodated with ease.

The main dashboard display, including the speedometer, rev counter and trip computer, is stylish and clear, with simple illuminated numbers. The ancillary control stalks are easy to use, and the touch-screen sat nav is simple and clear to look at, while also being straightforward to use and understand.

All models are extremely comfortable with a plush ride that soaks up all but the worst of British road surfaces. The seats are the soft side but with plenty of adjustment. The steering column might not extend out far enough for some drivers, though.

Remote central locking with a Thatcham Category One alarm and immobiliser is standard on the Optima. There's also anti-hijack door locks, locking wheel nuts and deadlocks so that if a window is smashed, thieves still can't open the door even from the inside.

A good selection of key safety technology includes seven airbags all around the car, ABS, ESP, child locks, ISOFIX child seat mounts on the two outer rear seats. It doesn't break new ground in this area, but the Optima covers all the important technologies well.

Keen drivers won't be impressed by the Optima's suspension setup, as it's not as sporty to drive as some of its rivals. That said, drivers who like to sit back, relax and enjoy a comfortable ride in comfortable seats will find the car appealing.

The upside of the Optima's hardwearing interior is that it would be a good car for families. That said, its cabin isn't as versatile as a dedicated people carrier, making the four-door, four seat layout less appealing than, say, Kia's own Carens MPV.

In theory the Optima would make a great choice if you needed its luggage capacity and comprehensive warranty and had to have a saloon. In reality there are better cars for novice drivers such superminis, although as a first company car the big Kia is certainly easy to drive.

Everything inside and out is solidly put together, but the obvious hard plastic seat backs and the lack of a prestige badge, or at least one familiar to fleet buyers, might mean that some people dismiss it before they look further under the skin.

In saloon guise the Optima's boot is large and perfectly suited to a business trip involving large amounts of support material. There are no problems with the width of the door apertures, although rear seat passengers will need to duck their heads to avoid the sloping roof. The boot also has a relatively low loading lip, making loading and unloading heavier objects easier than it might otherwise be.

The standard audio provision is a solid performer, but the large colour touchscreen combined with sat-nav is a huge improvement. All the important connections are present - Bluetooth, MP3 player - and the system proves intuitive and responsive.

Bold colours are your best option with the Optima, as these better flatter the car than darker hues. The cabin is full of dark plastics, but the light colour trim accents do much to lift the otherwise sombre ambience.

The Optima might be a big car but it's not one that's hard to park. Aside from the semi automated parallel park option, the car's steering offers ample assistance when you take the DIY approach. Good visibility and parking sensors are also welcome.

Volkswagen Passat Commands a more premium image than rivals, but can be expensive