A world away from conservative Jaguars of the past 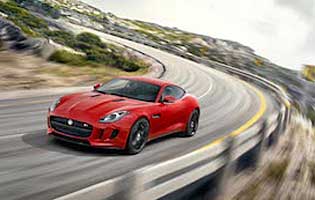 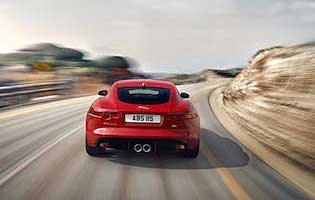 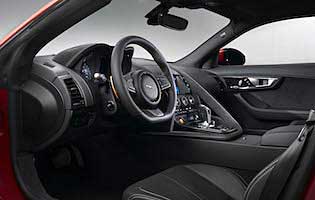 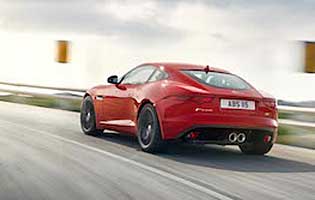 Alongside the roadster variant, Jaguar's F-Type coupe has been one of the most eagerly awaited cars in recent years. The F-Type signals a new design and dynamic direction for the Brit car maker, as it aims to attract a younger audience.

In coupe guise the F-Type is pitched to offer a more driver-focused experience than its roadster stablemate. This is most obvious by the inclusion of an extra hot version of the range's flagship V8 model. The V8 R boasts a generous 550 horsepower - easily pushing it close to supercar territory.

Back in the real world and the V6 pairing should please most buyers. In 'S' trim the car gains some useful performance tweaks to ensure it can both satisfy those wishing to cruise along and keen drivers seeking to exploit the car's rear-drive layout.

And alongside the car's dramatic exterior design, the aural experience follows a close second. Like the roadster, this F-Type is very un-Jaguar-like in its behaviour; the default mode is to bark and bellow as you drive rather than waft along in a style similar to the older XK.

The end result is a car equally at home on the race track as it is the run to the shops. You detect a slight edginess to the F-Type's character as it encourages you to push a little harder, but this isn't at the expense of ride comfort or refinement. It's no limo, but neither does it behave like a stripped out racer.

Our verdict on the Jaguar F-Type Coupe S

There's no denying the fact that, with the arrival of the F-Type, Jaguar has taken a leap forward in terms of boosting its image. Thankfully the car's abilities back up the marketing hype - the F-Type coupe offers an exhilarating driving experience and possesses a level of visual drama that's unmatched by its closest rivals.

In entry-level guise the F-Type coupe is something of a bargain, although you'll need to tick plenty of options to make it more useful and enjoyable day-to-day. The V6 S is likely the sweet spot of the range, although driving this hard will mean frequent fuel stops. It's the same and more if you opt for the thirsty V8 R.

With a useable boot the F-Type coupe offers an added level of practicality over the roadster variant. Elsewhere it's the same story though, with limited oddment space in the cabin and an overall snug feeling when occupied by two adults.

The cabin layout is arguably more simple and clear than the rest of the Jaguar range, thanks to the attractive instrument display and stripped-back centre console with just a few buttons to operate the climate control. For all its colourful graphics, the infotainment screen's operation could be more intuitive though.

Despite being marketed as an out and out sporting car the F-Type stays true to its Jaguar pedigree with a remarkable level of comfort for driver and passenger. Noise levels are kept well in check, the ride is impressive regardless of the surface or the suspension settings, and seat comfort is also good over long distances.

Other than the standard alarm and immobiliser the F-Type has no additional security equipment. Naturally the tin-top coupe adds a welcome extra level of protection over its roadster stablemate.

A strong aluminium structure combined with high levels of grip, acceleration and braking power plus a sophisticated ESP system makes the F-Type a safe and confidence-inspiring sports car.

In normal driving the F-Type coupe is smooth, refined and easy to pilot, and the suspension copes admirably with broken surfaces. It's only when you push harder do you unlock the car's true potential. It can be quite a hooligan in the right hands so you need to know what you're doing. It is good fun though, with the V6 S proving more than adequate and the V8 R a decadent choice if you want more of the same - noise, speed, drama.

With only two seats and a modest boot by family car standards, the F-Type is unsuited to family duties, aside from light duties as a second car in the family.

Even in its most humble form the powerful, rear-drive F-Type is too expensive and too fast for a novice driver to manage.

The F-Type is a good demonstration of Jaguar's recent quality improvements. The car provides an attractive and well-constructed cabin with quality materials throughout. It also aims to build on the E-Type's iconic image, and the combination of performance and sharp design gives it sufficient kudos to stand out on its own.

The car's long doors make access easy, while even the low roofline doesn't force you to duck excessively in order to climb aboard. At the rear the coupe trumps the roadster with decent access to the larger bootspace.

The F-Type inherits the touchscreen system already seen elsewhere in the Jaguar range, including the option of a high specification Meriden audio system. The screen itself works reasonably well as do the alternative controls on the steering wheel.

Thanks to its dramatic exterior, the F-Type suits a wide range of colours, both loud and discreet. Even the range of wheel options allows silver or carbon-finished spokes to increase the scope for personalisation. On the inside the standard mix of leather and chrome trim is attractive and feels of good quality.

The F-Type coupe doesn't boast great rearward visibility but the inclusion of parking sensors as standard as well as the option of a rear view camera makes short working of parking.