The styling changes are obvious from the front 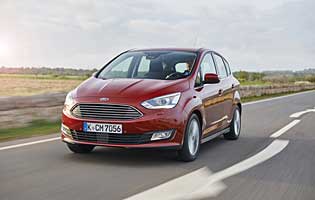 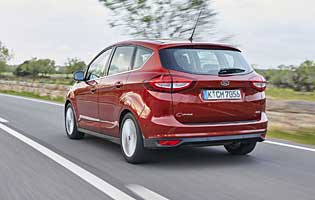 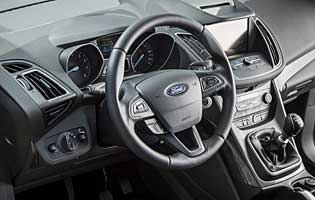 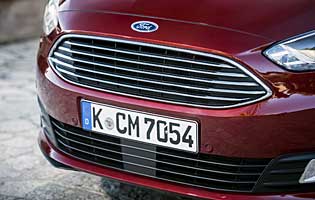 The C-MAX is a car that's very rarely talked about or noticed on the road, having somewhat average dimensions and no especially remarkable design features. But despite its lack of obvious popularity, it is Ford's third-best selling model in Europe, and this mid-life update does nothing to diminish its appeal.

There are two versions of the car: the C-MAX, with five seats, conventional doors and its steeply sloping roof line towards the rear, and the Grand C-MAX, which has sliding rear doors, a higher roof line and seven seats. Between them they are designed to cover the majority of the mainstream MPV market.

The most obvious change made to the 2015 model is its new front styling, which fits into Ford's global design policy. The same grille, or versions of it, can be found on its entire range, including commercial vehicles. But under the skin there are now more technological features that have filtered down from more expensive models.

With young but growing families in its sights, the C-MAX has features like a hands-free powered tailgate on high trim grades, which opens with a wave of a foot beneath the bumper. There's even a child observation mirror in the roof. Tech-hungry younger buyers will engage with the likes of the voice-controlled interface, while a standard heated windscreen makes cold days less of a chore.

The C-MAX inherits the driving enjoyment of the Focus, with which it shares a chassis, easily placing it above most of its rivals in the eyes of keen drivers. As a result it offers a unique package among mainstream MPVs, combining plentiful interior space, surprising driving dynamics and advanced technology, both for safety and for infotainment.

Our verdict on the Ford C-MAX Titanium 1.0 125PS EcoBoost

The C-MAX may be underrated by many, but it also sells exceptionally well. Mechanically it is broadly the same car as the previous model, but there have been plenty of electronic and efficiency upgrades which, along with the improved styling, help to give it a fresh start. It is immediately likeable regardless of specific engine choice.

At the top of the range the C-MAX easily steps into the pricing territory of its seven-seat cousin, the S-MAX, which makes it feel expensive. On the other hand, entry-level models can feel lacking in equipment for their more reasonable price. Fuel economy should be good, if not quite matching the official figures.

The C-MAX is not as spacious in the back as its closely-related brother, the Grand C-MAX, and the boot size may not quite meet some expectations. Inside the cabin there are two generous central cupholders with a space in between for further loose items. The door pockets are slim but long, and there is useful storage space in the glove box if needed.

The main instrument cluster is technically a last-generation unit but it works well, giving clear indications of speed, engine speed, trip computer information and more without overloading the displays. The central touch-screen is recessed into the dashboard to guard against glare, which doesn't always work, and both it and the stereo controls below it can be a bit of a stretch to reach.

Passengers won't be cosseted as if they were in a Rolls-Royce, but there should be enough legroom even for older kids. The front seats have a little lateral support and keep occupants comfortable as much as could reasonably be expected, whereas the three-seat bench is typically flat. Those sitting on it won't appreciate brisk cornering. Dual-zone climate control helps to keep things at the correct temperature.

With keyless entry standard on high trim grades there is no need to be distracted while fumbling in bags or pockets for keys. The luggage cover in the boot hides valuables from view, and there is the glove box inside the cabin if small things need to be kept out of sight. Deadlocks are standard as part of the remote central locking, and can be activated either automatically or by a second press of the key fob's 'lock' button.

While the compulsory inclusion of stability control, anti-lock brakes and more is very welcome, Ford has left several desirable and commonplace active safety systems on the options list. Automated low-speed emergency braking, lane-departure warnings, driver attention monitors, traffic sign recognition and blind spot warnings are all optional, where many other cars at this price point feature at least some of these as standard.

The C-MAX is comfortably among the best MPVs to drive thanks to low amounts of body roll, direct and accurate steering and a composed ride. A dedicated driver can hustle it along a country road at a turn of speed that can amaze drivers of hot hatchbacks. There is an excess of grip through corners, while in town things are easily managed thanks to lightweight controls and responsive brakes.

Young families who want more outright space than the cleverly designed B-MAX can offer, but who don't need seven seats, are the main target group for Ford. The ample headroom makes fitting a child seat easier, whether it is to the Isofix points or not. Naturally, the front passenger side airbag can be switched off for when carrying a rear-facing child seat in the front.

The C-MAX may be easy to drive in a not dissimilar way to a typical supermini, but the increased purchase price is an off-putting factor. It is conceivable that an older driver passing their test might appreciate the space and higher driving position, but such buyers will be few and far between.

As a new car the C-MAX certainly feels sturdy and high enough quality. Some of the surfaces in this model feel like they may begin to wear or become unsightly after extended use. As for image, the C-MAX itself is so innocuous a model that its general reputation barely strays from the middle of the road.

Four conventional passenger doors and a powered tailgate are fitted to the C-MAX. A useful feature is the keyless-opening boot lid, which with a wave of a foot beneath the rear bumper when the key is next to the car opens the boot mechanism and lifts the lid. It allows shopping or heavy items to be loaded with no fuss. There is perhaps not quite as much foot room through the rear door aperture as some would like.

Drivers can choose between steering wheel-mounted audio controls and the main set just below the eight-inch colour screen. Both operate the stereo's many functions. All the most popular types of input are available, including Bluetooth, CD, AM/FM radio, DAB radio and USB. The latter will also charge devices that plug into it. The new media screen has fresh new graphics and a menu system that flits between the clear and the overcrowded depending on the exact screen.

There is a broader selection of colours than might reasonably be expected of Ford for a compact MPV. Blues, browns and reds liven up the otherwise stoic selection of monochromes. White cheapens the car's look, and the fruity metallic red is a perfect partner. The interior trim is quite simply laid out and strikes an appealing balance between premium and practical.

Surprisingly, rear parking sensors are not standard, and while they're not expensive to add as an option they really should be included for the price of the car. A reversing camera is another optional extra. These are glaring omissions when the rear window is so high and shallow in height, because rearward visibility is highly restricted. The car itself is not very wide, and so slots into most typical bay spaces easily, but in parallel parking some people may want for electronic help.