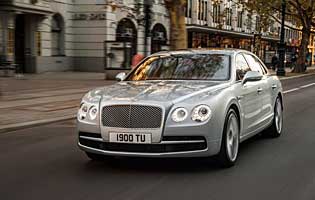 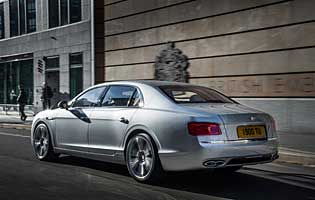 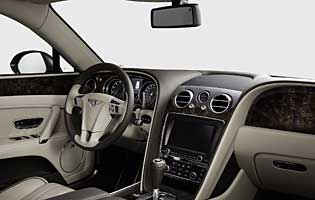 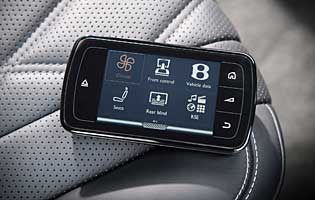 Despite the popularity of the Continenal GT coupe Bentley remains a luxury manufacturer that sells large, comfortable saloons to well-heeled individuals. The Flying Spur benefitted from a thorough update in 2013 that brought improved refinement, looks and equipment, but now it has introduced its impressive V8 into the mix to offer an alternative to the mighty W12 option.

Saloon cars make up a huge part of Bentley's history and for some periods of its existence it has sold nothing but four-doors, so it is no surprise that the Crewe firm is expanding the reach of its important Flying Spur model. The key change here is the introduction of the smaller V8 engine, first seen on the Continental GT coupe model.

The 4.0-litre V8 unit was built and designed with group partner Audi, and features a host of modern features to improve both performance and efficiency. As with the W12 model it features twin turbochargers for a significant power boost, but also offers cylinder de-activiation; at a constant speed it will temporarily shut down four cylinders with a promised improvement in economy as a result.

Elsewhere the Flying Spur V8 borrows much of its mechanical make-up from the W12 model. It uses the same four-wheel drive system to deliver power to the wheels and drive is carried by an eight-speed automatic gearbox with the option of paddleshifters too. A further advantage over the W12 car is lighter overall weight; the V8 is some 60kg lighter.

The Flying Spur is also markedly biased towards comfort to a greater degree than other models in the range. Unlike the Continental GT coupe where the owner is expected to most of the driving, the Flying Spur owner will spend some time behind the wheel but most likely be in the back seat. To that end there is a novel wireless touch screen device in the rear, while the suspension is considerably softer than the outgoing version.

Our verdict on the Bentley Flying Spur V8

Some cynics might see the inclusion of a V8 as a downgrade for the Flying Spur. The car's hi-tech engine is anything but a retrograde step and, combined with the usual levels of luxury and refinement on offer, this is a choice you can make with confidence.

A slight reduction in fuel consumption for the V8 version is a help, as is the lower purchase price but these improvements are still relative; the Flying Spur remains expensive to buy, fuel and insure and is not suitable for anyone watching their pennies.

Although not designed to be particularly space efficient the Flying Spur does at least make good use of its footprint. There is vast amounts of leg and elbow room, particularly in the rear, while headroom is more than good enough. The boot is also big, although the optional Naim Audio system does encroach into the boot as this is where the separate amplifier is mounted.

The basics of the Flying Spur remain the same with big, traditionally-styled instruments and clearly labelled buttons. The layout is starting to age, although it still works well, but it is the touchscreen system that is beginning to let the side down. Although it operates well for the most part occasionally the system can be slow to respond and the graphics look quite old now.

Anything less than supreme comfort would be a disappointment for a Bentley driver, and the Flying Spur delivers in fine style. The seats are as comfortable as quality armchairs, with features such as heating, ventilation and massage available. Noise levels are exceptionally low and it requires very little effort by the driver to make good progress.

A full alarm and immobiliser system featuring exterior and interior monitoring and a tilt alarm is fitted as standard, as are keyless entry and start. A tracking system can be specified for extra reassurance.

As well as the security of four-wheel-drive as well as the usual collection of electronic aids, the Flying Spur is a very sturdy, heavy car that would no doubt take a collision as well as any car could.

It's easy to assume that with the lesser engine under the bonnet the Flying Spur driving experience will be somewhat compromised, but the truth is that it barely feels any slower or less refined than the W12. The V8 engine spins smoothly, has ample torque for rapid acceleration and emits a suitable growl when extended too. Better still it weighs less than the 12-cylinder option and if anything the V8 Flying Spur is a little more agile as a result. Regardless it offers a supremely relaxing drive whilst retaining the ability to cover ground very rapidly when required.

Children will no doubt love travelling in the Flying Spur, and with the option of two individual seats or a bench seat for three in the rear it can certainly handle three children of any age. Those with smaller children might need all the available boot space for larger pushchairs however, and although the high quality materials might well stand up to toddler abuse it would be a brave parent who did so.

It may have a smaller engine and better fuel consumption than the W12 version but the Flying Spur V8 is still likely to be too expensive, too fast and too costly to insure for any new driver.

The quality is never in question, with near faultless manufacturing and a solid, weighty feel to the whole affair. The Bentley image is one with much appeal, but the Flying Spur is a less obvious car than some. Some drivers may appreciate the less showy nature of the car, but others might want something with more visual presence for the money.

With big doors front and rear nothing less than easy access to all the seats would do for wealthy customers. There's soft automatic closing on all doors too so there's never any need to reach for the door handle twice. The same goes for the vast boot which can be opened at the touch of a button.

In respect of audio the Flying Spur can be specified with the superb Naim Audio upgrade, which supports DAB and DVD/CD playback as well as a hard drive for music storage. The optional rear entertainment package extends this still further. On the downside the Flying Spur still uses rather elderly touchscreen software with basic graphics which are disappointing on a car of this status.

Predictably the Flying Spur is available in a huge range of colours, trims and finishes. While the saloon can carry off more strident shades its lines are best served by classic blues, greys and silvers. On the inside taste is the only limitation, with even more options with contrasting or matching stitching, a choice of veneers and aluminium finishes. Expect very high quality whatever you choose.

It may be smaller than the vast Mulsanne but the Flying Spur is still a big car. However the four corners are easy to keep in view and the standard parking assist means as long as you can find a suitable space, getting parked is straightforward. Kerbs should be watched with caution however to avoid damaging the large alloy wheels.

BMW 750iL Sporty but comfortable, a technical feat but image not as strong