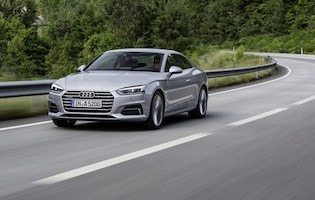 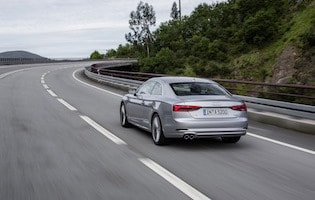 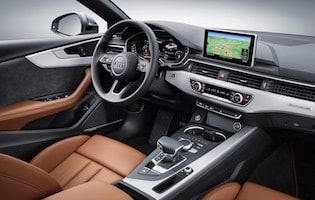 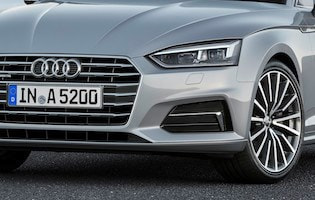 The first-generation A5 was introduced in 2007, and since then has experienced a huge amount of popularity. Coming as a smart and well-finished coupe, it's unsurprising that so many people chose one. Now there's an all-new model, which hopes to build on the success of its predecessor through the use of greater levels of technology, as well as improved comfort.

The new A5 retains the original car's sweeping looks, but with certain elements that bring it bang up to date. There's a lower roofline than the previous generation, which gives the car an even sleeker appearance on the road – though of course this does affect interior headroom somewhat. SE and Sport model cars come with 17-inch alloys giving them a sporty look.

The front end of the car certainly leaves no doubt as to which brand created it. The trademark Audi front grille remains, but this is now framed with headlights that are far subtler in their design than the outgoing car. The interior has been refined in a similar way, and now benefits from Audi's excellent Virtual Cockpit infotainment system, which helps de-clutter the interior.

There's a decent range on offer with the new A5, going from a 2.0-litre petrol to a 3.0-litre turbocharged diesel. Either can be specified with Quattro all-wheel drive, which will be a smart choice for those looking for added traction, especially in winter conditions. The variety of engines available all offer an economical drive, though the diesels will undoubtedly be the most popular, especially for business owners.

The first A5 was able to offer a decent amount of practicality, despite its coupe format. The new car is just the same, albeit with a similar lack of rear legroom. The boot is large enough for a few good-sized bags, while this is easily extended with the rear seats folded flat. In all, the A5 is a surprisingly practical coupe, which is ideal for those looking for a car to use each and every day.

The A5 is a great choice for those looking for a smart, well-finished yet economical coupe. It's expensive, with prices starting at £30,700, though the amount of equipment fitted as standard is impressive. It's certainly a premium-looking vehicle, both inside and out, which is in keeping with Audi's brand image. It's also a very comfortable place to be, and will be ideal for those looking to do longer journeys, as well as short trips around town.

With a range of efficient engines, fuel costs should be relatively minimal with the A5. However, consumables such as brakes and tyres may prove to be a costlier area. With larger wheels come larger tyres, and as such it'll be more expensive to replace them than in other cars. Servicing costs will also be higher, but this is to be expected of a premium car in this price bracket.

As a three-door, five-seat coupe the A5 isn't the most practical of cars. However, with a boot size of 465 litres it isn't too limited in terms of space. The rear seats fold 40/20/40, and doing so gives a lot more storage space. Those seats also fold relatively flat, leaving just a small slope when collapsed down. The A5 offers more space than rivals, which means that if you're looking for the best available storage space, then the A5 is a good choice.

This is an area where Audi is really hitting the nail on the head at the moment. Each screen and display within the A5 is crystal clear, while even the main dials are extremely user-friendly. All of the heating controls have a good amount of weight to them, while the buttons mounted to the multifunction steering wheel operate with a real sense of quality. Even the rotary dial for the audio volume feels spot-on.

As previously mentioned, the A5 is a firm car, especially in S Line trim, but for the most part it remains composed and comfortable. The cabin has good sound insulation too, which means that road and tyre noise aren't too noticeable. Those in the back may be less comfortable, however, as seats really aren't suited to adults. Children should be fine in the back, but even they may be a little cramped on longer journeys.

All A5s come with remote central locking as standard, as well as an alarm and immobiliser. The car's subtle styling does mean that it shouldn't attract too much attention to itself, though the Audi badge that is so synonymous with premium cars may do just that – which is something potential buyers may want to consider. However, cars specified in darker shades really shouldn't suffer any negative attention.

The A5 has already been given five stars by Euro NCAP, making it one of the safest cars on the road today. This is down to the high level of occupant safety it offers, as well as the amount of pedestrian safety it has. The A5's level of safety assistance systems also impressed NCAP judges. These include pre-sense city, which can scan the road for an impending collision and, if one is detected, automatically slow the car down while warning the driver.

The A5 is an exceptionally appealing car to drive. With its sports car looks and powerful range of engines, there are few people who would turn down a drive in it. It handles very smartly, and all engines in the range pull well. The 2.0-litre diesel, which is set to be the best seller, is quick enough for every situation while returning excellent economy figures. It is firm, but then the sporting nature of the car lends itself to this.

Despite having five seats, the A5 isn't perhaps a car best suited to family life. Fitting a child seat into the back of the car could prove difficult given the car's coupe layout, while kids may struggle for space in the rear once they pass infant age. However, if you're willing to put up with some of the shortcomings there is enough space in the boot for a compact weekend away, and the A5 is a safe place to be too, ensuring families feel secure.

The A5 is a very appealing car for first-time drivers. It has real badge appeal, sporty looks and enough power to scare most first-time passengers, too. However, the reality is that the A5 is an expensive car to purchase and insure, which will put it out of the grasp of many just-passed motorists. Of course, some may be able to afford it, but those who do will be greeted by a car that has the potential to be quite intimidating in terms of size, especially for those just learning the ways of the road.

Audi has always maintained a distinct sense of quality within its cars, and the A5 is no different. All of the interior materials feel of a high quality, and the de-cluttered nature of the cabin makes it a relaxing place to sit. There are a few harder plastics used lower down the cabin, but for the most part it's a well-made and premium-feeling car. The exterior is no different, with neat touches giving a subtle style on the road.

Being a coupe, the A5 isn't one of the most accessible cars on the market today. With a low ride height, it takes a real effort to get into the vehicle, though thanks to two large doors that open widely, it isn't too much of a chore. The seats also have plenty of adjustment, so it's easy to find a comfortable driving position.

As standard, base cars receive a seven-inch colour display, as well as smartphone connectivity and Audi's own sound system, though higher-specification cars get a Bang and Olufsen sound system, which provides a truly premium sound and is well worth the extra cost. Bluetooth connectivity is also fitted to base-spec cars, though those equipped with the additional technology park will be a smarter choice, as this adds satellite navigation and wireless phone charging.

As with any premium car, there's a wealth of customisation options to choose from. However, that said, the level of standard equipment means that there shouldn't be too much box ticking to do. Sport cars get 17-inch wheels as standard, as well as cruise control, satellite navigation and three-zone climate control. Add into that Xenon headlights and a multifunction steering wheel, and you have a car that really doesn't need all that much adding to it – though the option is there, of course.

The A5 is quite a long car, and when coupled with limited rear visibility can turn it into a car that is difficult to park. However, all cars come fitted with sound and visual parking aids displayed through the infotainment screen. This includes visual guidelines that show the predicted path of the car according to steering angle. Higher-specification cars gain a rear-view camera, which makes positioning the car even easier.