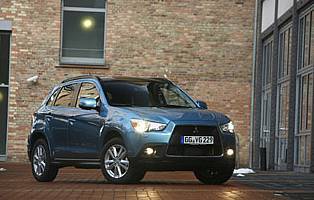 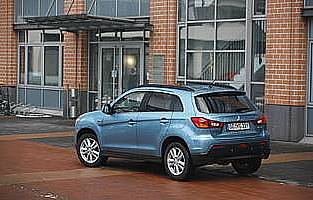 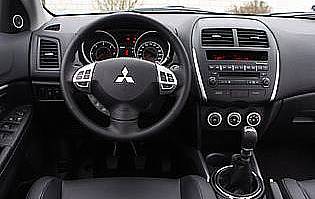 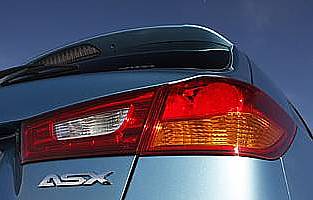 Japanese manufacturer Mitsubishi has broadened its sights with its latest new model; a crossover called the ASX designed to appeal to a wide spectrum of drivers and car buyers. Like its crossover competitors, the ASX aims to fuse the admiral qualities of a compact hatchback and a compact SUV into one, genre-defying model.

The crossover segment was the largest growing market in Europe in 2009 and is therefore not one that a many manufacturers can afford to ignore. Mitsubishi is set to cash in on the public's thirst for crossover models with its latest car, the ASX. Standing for 'Active Sports Crossover', the ASX is a model in the mould of the hugely successful Nissan Qashqai.

Mitsubishi's 'global platform' strategy has proved a wise one, allowing the ASX to be built using the same floor as the established Lancer saloon and hatchback and Outlander soft-roader models. Two engine options are initially available; a 1.6-litre petrol and a 1.8-litre diesel which Mitsubishi claims is the first diesel to use variable valve timing. A less powerful diesel is set to follow after the initial launch, while diesel variants can also be equipped with four-wheel drive.

A concerted effort has been made to reduce running costs, fuel consumption and CO2 emissions with the new ASX range. All models feature a stop-start system as standard, which brings the engine to a stop when the car is not moving. Energy recuperating brakes, LED lighting, electric power steering, low rolling resistance tyres and low viscosity oil are all standard too. The petrol version comes equipped with a five-speed manual transmission and class-leading MPG. The diesel gets a six-speed unit to aid economy and refinement.

Three trim levels are available in the UK, but all models get ESP, alloys wheels, driver's knee airbag and a fully adjustable steering column, alongside the economy improving technology. More expensive versions get heated seats, cruise control, leather and even a reversing camera.

Our verdict on the Mitsubishi ASX ASX3 1.8 Diesel 2WD

Mitsubishi makes no secret of its Nissan Qashqai emulating desires with the ASX, but it does add something new to the segment with the impressive range of economy and ecology focussed features. The interior space is one of the most striking elements of the ASX and the excellent driving position and strong equipment levels impress, too. The driving experience is less rewarding than some, but still notably assured for a taller vehicle.

The ASX has a very accommodating interior, with excellent rear legroom, good headroom and a large boot accessible through a wide boot door. There's a strong feeling of spaciousness within the cabin; the addition of the full length glass roof option on the top trim level exaggerates it even further. Internal storage options are not overwhelming but will suffice.

The ASX features a particularly sharp set of dials; colourful and clearly lit they give the vehicle a more upmarket feel from the driver's seat. The controls conform to a traditional layout with few surprises. The three-dial set-up for the ventilation system is simple and effective and the sound system is incorporated neatly into the unfussy centre console in non-sat-nav models. Wheel mounted controls for the audio and cruise control are useful on the ASX3 model.

An impressive quality of ride is key to the ASX's more than adequate level of comfort. The seats are supportive and adjustable and the decent level of equipment also adds to the relaxing mood inside. The standard stop-start system is reasonably refined in its operation with little harshness or shudder as the engine shuts down and restarts. There is some wind noise penetration at higher speeds, however, and the turbo whistle from the diesel engine is often present.

Remote central locking is standard, but the ASX also features a double locking system that allows only the drivers door to be opened if required. The ASX3 model features a keyless start button system, too.

The Mitsubishi ASX has already received a five-star commendation from the safety experts at Euro NCAP. An energy dispersing structure helps protect occupants in the event of an accident while whiplash reducing seats, up to seven airbags, stability control and hill start assistance also aid safety. Pedestrians are also protected by plastic front wings and bonnet and an energy absorbing front bumper. Wide vision headlamps are also particularly effective, casting a sharp beam across a wide angle.

The key to the appeal of crossover models is that they offer the raised ride-height and driving position of an SUV model but with the road manners and manoeuvrability of a traditional family hatchback. The ASX is less adept than some of its key rivals at delivering that c-segment hatch-like driving experience, but it's still a marked improvement over a compact SUV. Although there is still some body roll in the corners, the ASX never feels like it is losing its impressive traction on the road even in two-wheel drive form. The steering has a springy and responsive feel and the driving position is excellent, with very good visibility. The diesel engine takes a little time to get into its stride, but is punchy once the turbo comes in.

The ASX is strong on family appeal, offering all that parents and children could desire from a vehicle in terms of space, tractability, economy and practicality. The robust interior should deal comfortably with family life. The ASX offers a spacious and versatile family car that takes up a similar amount of space on the driveway as a traditional hatchback.

The ASX couldn't be ruled out as a first car choice owing to its ease of use, practicality and value, but is perhaps a little larger than the average first car buy.

Mitsubishi has a reputation as a niche manufacturer in the UK - the ASX could prove to be its most popular and easily recognised vehicle thanks to the size of the potential market. As such, the company has little reputation in the UK other than for building the impressive Lancer Evolution rally-derived models and large SUVs. Quality is good but not overly luxurious; Mitsubishi's are value for money vehicles but materials and build quality are not skimped upon.

The slightly raised cabin of the ASX simplifies access to a degree. Tall doors offer a sizeable portal and, at the rear, the boot door is very wide. The ASX should prove an easy car to get in and out of even for the less agile.

Sat-nav and a reversing camera is reserved for the top specification ASX4 model only, but the ASX3 is still reasonably well equipped with a high-tech sound system incorporating an auxiliary input and Bluetooth. Audio controls are also present on the steering wheel for ease of use. Sound quality is respectable and the system easily fills the cabin with sound.

The distinctive shape of the Mitsubishi ASX looks particularly smart in some of the lighter metallic shades available and customers should not struggle to find a colour to suit their tastes. Exterior and interior trim depends on the model, but the mid-trim level ASX3 gets chrome exterior detailing, leather on the steering wheel and gear knob and privacy glass. All models benefit from alloy wheels.

The ASX should pose few problems when it comes to parking. The shape is uniform and easy to judge, the turning circle good and the raised driving position is complimented by large mirrors to offer an excellent view around the car.

Nissan Qashqai The original crossover set the template for segment