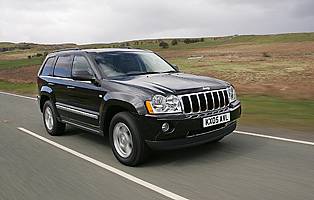 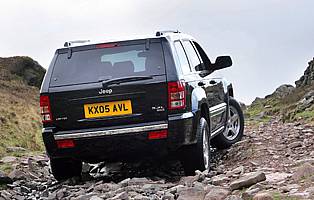 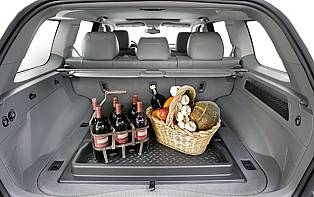 Ever since it made its UK market debut, Jeep's Grand Cherokee has been a popular choice for buyers seeking an affordable alternative to the likes of BMW's X5 and Mercedes' ML-Class. However, it's never been the most refined of vehicles on the road - where many 4x4s spend most of their time. This variant is not only classier in the metal but more civilised in the way it drives.

A mainstay of American off-roading and recreational driving, since its UK launch Jeep's Grand Cherokee has made many friends. For some it was a welcome alternative to the German opposition, while for others it gave them an opportunity to buy into modern-day American car culture.

Unfortunately, buying into the Grand Cherokee also meant experiencing all that was bad with American cars. Compared to European offerings, the big Jeep lacked sophistication. Interior trim quality was less than impressive, as was the calibre of some of the standard equipment and the space available - despite the car's considerable size. It didn't handle too well on road, either.

For all its faults, it has sold in substantial numbers, proving that image counts for a lot in the SUV market. Cleverly priced to undercut models from the likes of BMW and Mercedes, the Grand Cherokee has always been promoted as a good value for money 'posh-roader'. As an added bonus, it's more talented than many of its rivals when the going gets tough away from city streets.

This Grand Cherokee builds on the old car's strengths and improves things in areas such as on-road performance and refinement. It also looks more sophisticated, thanks in part to its sleek exterior. But it's the way the car drives that should silence even its fiercest critics. Improved suspension and steering, along with a longer wheelbase, revised transmission and an excellent diesel engine have all conspired to make the Grand Cherokee an enjoyable and rewarding car to drive.

Our verdict on the Jeep Grand Cherokee 3.0 CRD Limited

When manufacturers claim to have improved one of their models, the end result is usually little more than a nip and tuck job. The Grand Cherokee is different; apart from the welcome modern styling, the way the car drives is a huge improvement. Although it's still capable of climbing the steepest slopes, on road it steers and goes with the confidence of something much more expensive. And while it can be had with a pair of typically American V8s, the Mercedes-sourced diesel is the icing on the cake.

The Grand Cherokee ranks alongside premium saloons in the cost stakes. And while selecting the diesel engine is the most sensible option, you'll return economy figures closer to that of modest petrol-powered saloons. That said, it's still a better performance than what the V8s can offer. Save for routine maintenance, fuel and insurance will probably be the biggest costs. With 4x4s always popular among the criminal fraternity, don't be surprised if you get charged a premium for the privilege of owning one. On a positive note, Grand Cherokees have always been popular, so you're unlikely to see residual values plummet anytime soon.

Unlike some SUVs that take up a lot of road space but aren't terribly accommodating once you're inside, the Grand Cherokee lives up to its name. This model might boast a fraction less height than its predecessor but its cabin is plenty roomy enough in terms of head and legroom and width. The rear seats will split 60/40 and fold almost flat, while access to the boot is straightforward. Elsewhere there are plenty of storage spaces and cup holders dotted around the cabin.

For all the Grand Cherokee's good points, and there are many, its cabin is a bit of a letdown. The various controls look a little dated and the materials used fail to do justice to the car's asking price. Everything's where you'd expect it, though, with the upright fascia housing the ventilation and audio/sat-nav equipment. It's all very easy to use, just not as stylish as the car's exterior. The only gripe concerns the handbrake, which is big, requires a hefty pull and is located on the opposite side of the console to the driver.

The car's spacious cabin allows occupants to stretch out comfortably. The slight increase in width and generous increase in length is obvious; rear seat passengers have more room over the previous Grand Cherokee for instance. The seats are distinctly un-American in the sense that they are firm and supportive, while noise levels have been kept to a pleasing minimum. The diesel-powered model being especially hushed at speed.

Standard fit is remote central locking plus an immobiliser. With posh off-roaders always popular with the criminal fraternity, an alarm wouldn't be much use so it might be worth investing in a third-party tracking device in a bid to thwart the thieves from selling your car abroad.

You get all manner of safety kit as, predictably, some of it performs a dual role of keeping you out of trouble off road as well as on. Along with ABS you get traction control and an electronic stability system. Given the car's lofty stance, there's also an anti-rollover programme that will apply the brakes to particular wheels if it senses a problem. Tyre pressure monitors complete the package of active measures. In the cabin occupants are protected by six airbags - twin front and side curtain devices.

It's no exaggeration to say that the Grand Cherokee is a revelation on the road. That is, compared to its predecessor. The old car was ponderous and slow-witted on Tarmac, but the latest model is much sharper, more composed and more willing to change direction. The thorough reworking, including revised suspension and steering, has transformed the car. It's no Ford Focus, but it does compare well to the likes of Land Rover's Discovery 3, if not BMW's X5. Off-roading ability is as good as ever and, when powered by the great 3.0-litre diesel, the complete package delivers a refined, brisk, agile and capable driving experience.

There's no doubt that the Grand Cherokee will appeal to families. It's a rugged-looking, spacious holdall boasting plenty of cabin space and a go-anywhere personality - whether you choose to get its wheels dirty on not. In-car entertainment is generous, as are the number of storage spaces in the cabin. The Jeep's boot stretches to 1,909 litres with the split/fold rear seats down. Even if you don't venture off road, the Jeep will make a stable, safe and powerful towcar.

Unless you live in a central London district and daddy has pots of cash, it's unlikely that the Grand Cherokee will be your first car. It's big, powerful and requires some skill to park. Once acclimatised it's easier than you might think to drive, but there's no getting away from the fact that there are better first cars.

The Jeep brand and the Grand Cherokee possess a strong and healthy image in the eyes of prospective buyers. Seen as an alternative to the likes of BMW's X5 but at a slightly reduced cost, these distinctly American-styled cars are just as desirable as their German rivals. Sadly, the car's physical build quality can't match that of the competition, as trim plastics, switchgear and seat coverings could be better. That said, overall build quality is good.

You climb up into the Grand Cherokee, and although the distance isn't great the less agile might find this a chore over time. Once inside there's a decent amount of room, thanks in part to the cabin's generous width. Front seat adjustments are also generous, but the steering wheel only adjusts for rake - not reach. Access to the rear is reasonable, and once seated there's enough legroom even for adults. The car's tailgate opens with little effort but does need a firm push to close it. Predictably for a 4x4 the load lip is on the high side.

Standard fit is a radio plus single CD system. The unit sits near the top of the fascia, making it easy to access the controls and cast your eye across the display when on the move. Opt for a Limited-spec car you get a more powerful system complete with six speakers and a separate amplifier which really does sound good. The sat-nav option includes a large colour screen and a six-CD changer. While useful, the unit's controls could be more intuitive. By way of compensation, Limited models come with steering wheel mounted audio controls.

Both dark and light exterior hues suit the Grand Cherokee. The former gives the car a slightly menacing stance, if you like that sort of thing, while the latter flatters the car and does much to hide its substantial girth. Inside, the cabin is reasonably light and airy. The mid-tone colours used for the trim and modest use of dark wood trim helps make the cabin feel anything but gloomy or oppressive. And just like its predecessor, this Grand Cherokee's leather seats fail to impart a sense of genuine luxury.

The Grand Cherokee isn't a small vehicle but parking is made relatively easy thanks to the car's big side mirrors and the lofty driving position. The standard fit automatic gearbox makes manoeuvring at slow speeds straightforward, as does the accurate power steering. Rear parking sensors are standard on the Limited model.

Standard size wheel is fitted to all models.

Land Rover Discovery 3 More talented on road but a heavier, slower and a more costly car