Cute exterior is likely to have strong appeal 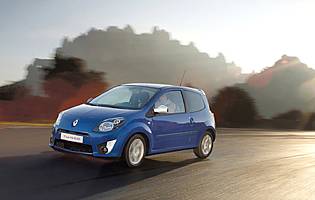 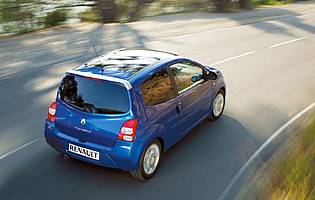 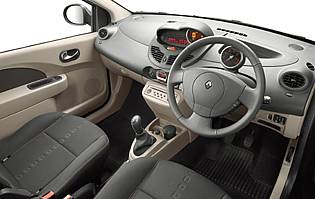 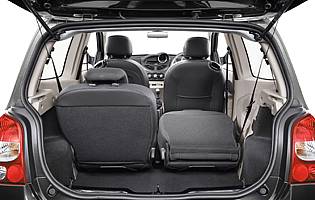 Expanding Renault's range into the smallest car sector is the job of the Twingo, the first car from the French firm to compete in the A-sector of the market. The last car to wear the Twingo badge was not sold in the UK, but Renault will be seeking to take sales from established small car rivals and build on the success of the bigger Clio III.

Unlike some of its city car rivals, the Twingo comes only in three-door form. The exterior design has a cute feel to it, thanks to the oversized wheelarches and friendly, smiling face. It also incorporates the design theme seen across the Renault range in the form of the 'kicked' tail which juts out below the rear window. The overall look is of a car that is designed to be seen in the city, though this may limit its appeal amongst image-conscious buyers.

Inside the Twingo benefits from a more interesting and practical approach than is found inside larger cars. The dashboard layout has a centrally-mounted instrument binnacle and display, except for the rev counter which is placed on the steering column. The rest of the dashboard is laid out in a simple fashion, creating a feeling of space.

In practical terms, the Twingo attempts to maximise its interior space thanks to individually folding and sliding seats all round. This allows boot space or legroom to be prioritised, or a mixture of the two according to need. With both seats folded 959 litres of space is available. Renault also claims 11 storage spaces in the cabin, including under-seat storage for the front passenger.

Mechanically the Twingo subscribes to the conventional layout, with a choice of small petrol engines mounted up front and driving the front wheels. The more powerful engine option is the 1.2-litre TCE unit, which is strong enough to power the larger Clio III, giving the Twingo GT a sportier edge without hurting economy.

The Twingo aims straight for the younger end of the small car market, thanks to its cute looks, sporty trim and clever cabin. The driving experience is competent rather than thrilling, but the packaging and specification are likely to attract buyers. Running costs will also be minimal, making it an ideal car for its chosen market.

Running costs for the Twingo should be very low indeed. Even the GT model is capable of high fuel economy and has a low insurance grouping.

Considering its external dimensions the Twingo does a good job of offering a lot of interior space. The flexible rear seating arrangement is a real benefit and although it does not change the overall capacity, it is unlikely that the Twingo would ever be used to carry four passengers plus luggage. The storage areas in the cabin are also useful, although the slope of the centre console means only small drinks can be stored in the cupholders.

The Twingo follows the current trend for a retro layout, with the speedometer and other displays mounted centrally and a rev counter on the steering column. The heating and entertainment controls are also on the centre console, so almost all the functions are grouped centrally, allowing both front seat occupants to operate them. The displays themselves are the standard Renault orange and are clear, though some of the stereo buttons are small and hard to read. Most functions are repeated on the column stalk however, which is much easier to operate.

The front seats offer a decent level of comfort, and although obviously more cramped, the rear seats are sufficiently comfortable for a long journey. Noise levels are also reasonably well controlled, although the ride is a little firmer than non-sporty competitors and may be too firm for some.

As standard the Twingo comes with remote central locking, while an approved alarm system is available as an option. The separate audio display is also a useful feature, deterring thieves from removing the system.

The Twingo offers four airbags as standard, including a passenger airbag with a new design to optimise the protection offered for different parts of the body. ABS is fitted as standard with ESP available as an option later in the car's life.

A car of this size should have a nippy and urgent feel to it, and in performance terms the Twingo does not disappoint. With 100bhp on offer the Twingo GT zips along well and feels quick enough to be fun without being genuinely fast. The 1.2 turbocharged engine is sufficiently refined too. The GT comes with sports suspension as standard, which does limit body roll but at the expense of a slightly firm ride. Those seeking more comfort may be better served by the Dynamique version. A slight disappointment is the steering, which feels a little low geared for a car of this nature and also lacks feel. The power steering can also be slow to offer assistance when manoeuvring at low speed.

With good space on offer for its size and a high degree of practicality, the Twingo could perform family duties within its obvious size and seating limitations. A single parent or single child family should find the Twingo big enough for regular use.

The Twingo is an ideal first car as it combines all the desirable features for those new to motoring. Purchase and running costs are suitably low, the Twingo is easy to drive and has the kind of features which are likely to appeal to younger motorists.

For a small car the quality of the Twingo's cabin is good. Although some of the plastics are not soft-touch, they are obviously sturdy and well constructed. The controls also feel sturdy and look as if they could cope with years of use. The Twingo's image successfully meets that of its target market, with a strong youth appeal and a sense of fun. A cabin as customisable as the exterior would make it one of the most youth-oriented cars on the market.

Access to the front and rear seats of the Twingo is surprisingly good given the three-door layout. The doors themselves are long and open wide, although the exterior handles are slightly fiddly. The same can be said for the boot handle, which can be hard to find, although once open the wide aperture makes it a straightforward affair to load items in and out.

The standard fit single CD/radio unit deliver respectable sound quality, and the controls mounted on an extra stalk behind the steering wheel are very useful. The optional upgrade to the Sound Pack brings MP3 player connectivity and an extra display.

Although the cabin is finished in a two-tone colour scheme, it is a little discreet compared to the exterior, which can be personalised in a range of colours and a series of decals, an unusual feature even in this class.

The Twingo is a very easy car to park. Its compact dimensions and excellent visibility make short work of slotting into spaces. The only demerit is that the power steering is sometimes slow to supply assistance when turning the wheel quickly at low speed.