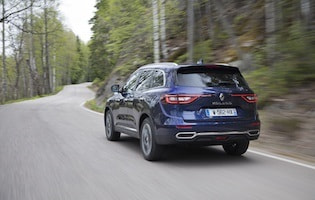 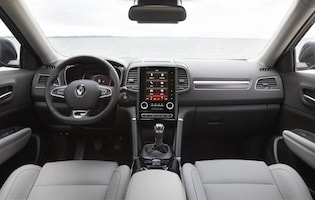 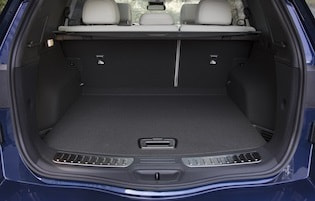 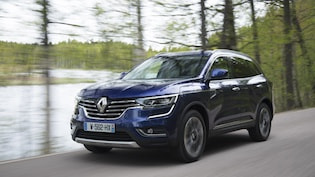 The Renault Koleos is quite a big deal for the French manufacturer. While it's not expecting it to sell in huge numbers, it's the new Renault flagship and has been designed with the intention of moving the brand upmarket. It also completes Renault's crossover line-up, along with the Captur and Kadjar.

As far as the Koleos's styling is concerned, we think Renault has hit the nail on the head. The big SUV shares a great deal of its design language with the Talisman estate, which is not on sale in the UK, and actually looks like the premium SUV the Renault is making it out to be.

However, the same can't quite be said of the interior. While it by no means look cheap, there's just something about it that doesn't give off the same up-market impressions as the exterior. That said though, it's certainly a comfortable and spacious place to sit and there's plenty of equipment as standard.

Renault offers the Koleos with a choice of two diesel engines – a 1.6-litre, 128bhp unit and a larger 2.0-litre 173bhp power plant. While the 1.6-litre engine does a good job of getting the Koleos off the mark, the more powerful 2.0-litre unit suits the character of the car better and would be our choice of the two.

Despite the fact that the Koleos shares a platform with the Nissan X-Trail, it doesn't quite perform as well as its Japanese counterpart out on the road. The steering isn't quite as communicative, and there is more roll through the bends. The large 19-inch alloys fitted to our test vehicle also meant it wasn't as refined at cruising speed, either.

Our verdict on the Renault Koleos Signature Nav dCi 130

The Renault Koleos is a bit of a mixed bag. Yes, it's a handsome car that drives well, but it's also really quite expensive compared with its traditional rivals, and the lack of a seven-seat configuration means it also isn't as practical. A generously specificed Skoda Kodiaq costs a similar amount, and also offers the added practicality of those two additional seats.

The Renault Koleos is an expensive proposition. With prices starting at £27,500 and moving up to around £35,000, the Koleos is getting close to truly premium rivals such as the Jaguar F-Pace. It's hard to imagine the Renault badge doing you any favours when the time to sell inevitably comes along, either. As it's a large SUV, keeping it fuelled won't exactly be cheap – the most economical of the range supposedly manages 52.3mpg on the combined cycle.

Interestingly, Renault has chosen to not offer the Koleos with the option of a seven-seat layout. Considering many rivals in this segment offer this configuration – including its sister car, the Nissan X-Trail – the Koleos does lose a couple of points on the practicality front. That said, there's more than enough room for four adults to ride in comfort, and three children will fit across the back seats easily. The 579-litre boot is also a handy size.

Like many manufacturers these days, Renault seems to be obsessed with housing the vast majority of the Koleos's controls withing the touchscreen infotainment system. While this means the dashboard may appear to be far less cluttered and a bit more visually appealing, in practice, it's really difficult to use while on the move. This isn't a criticism unique to Renault, though.

For the most part, the Renault Koleos is a comfortable car to drive. It's quiet and refined in the cabin, and heated and ventilated seats are welcome features. However, if you opt for the flagship Signature Nav specification, be prepared for the fact that the large 19-inch alloys do compromise the ride somewhat, and also generate a good deal of tyre road.

It's no secret that premium SUVs are a popular target among car thieves, and the Koleos's handsome looks mean it could attract some unwanted attention if parked on the street. However, thanks to security features such as central locking, and an immobiliser it shouldn't be too easy for undesirables to break in to the Koleos.

As the new Renault Koleos has not yet been crash-tested by Euro NCAP, it's hard to award the big SUV with a definitive safety rating. However, thanks to the strong level of safety equipment across the range, such as autonomous emergency braking, lane departure warning and traffic sign recognition, the Koleos should do well when testing time comes around.

Although the Koleos may not be as sorted out on the road as the Nissan X-Trail – with which it shares its platform and powertrains – it's still a competent SUV. There's a bit of lean through the corners, and the steering does lack some feedback, but you can still place it with confidence through the bends. One aspect we weren't too impressed with was the manual gearbox, which does feel rather vague and imprecise in its action.

Family buyers will be far more attracted to the Koleos. There's more than enough space to cart around three children and their associated bits and pieces, and that boot is an ideal size for the weekly shop. However, there are cheaper SUVs out there that also come with the option of seven-seats – such as the Skoda Kodiaq and forthcoming Peugeot 5008 – which might be a deal clincher come decision-making time.

There's no way you would want a Koleos as a first car. For starters, it's just too big and would likely be an intimidating vehicle to get behind the wheel of, particularly on narrow roads. Then there's the issue of the price. At £27,500, it's not just an expensive car for a first-time buyer, it's an expensive car generally. One of Renault's smaller models, such as the Clio, would make far more sense.

Renault is keen to pitch this car as a premium offering. While the Renault badge may not always conjure up visions of grandeur, you'd be hard-pressed to call the Koleos an unattractive beast. With prices starting at £27,500, it's not exactly cheap, either. However, there is a strong level of standard equipment, and you get the impression that it's been built to last.

Only the smallest passengers will have a tough time of getting in and out of the Koleos. The doors open wide, and the apertures are large, meaning access to both the front and back seats is never going to be a challenge. The top-of-the-line Signature Nav model also makes use of a powered automatic tailgate, too. All you need to do is wave your foot under the rear bumper and the boot will pop open, perfect when you have your hands full.

As with its sister cars, the Nissan Qashqai and X-Trail, the Renault Koleos benefits from a special premium Bose stereo system. This has been tuned specifically for to suit the acoustics of the Koleos, and workd incredibly well – producing a high-quality sound. The Koleos comes with plenty of kit as standard, with satellite navigation, DAB radio, Apple CarPlay and Android Auto featuring as standard on all models.

As the Renault Koleos is pitched as an upmarket SUV, it makes sense that it is available in a range of fairly subdued colours. The majority of the colours available are greys, silvers, whites and blacks. The stand out colours in the range are Admiral Blue and Mulberry Red, but these likely won't be the big-sellers. There are only two trim levels available in the UK – Dynamique S Nav and Signature Nav.

Let's not beat around the bush, the Koleos is a rather large car – which means inexperienced drivers may find it slightly intimidating to park. For the rest of us though, it really isn't too difficult. There's a good amount of visibility out of the cabin, and thanks to features such as a standard-fit rear parking camera and sensors across the range, manoeuvring the big Renault a fairly easy process.