Liquid Yellow has made a return specifically for the R27 model 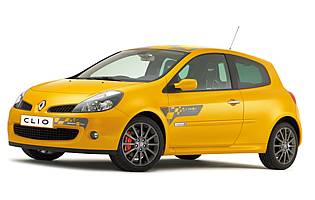 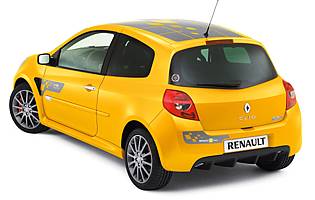 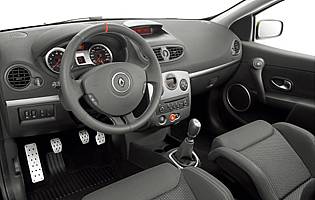 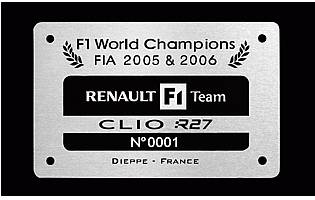 Renault has a history of building lightening quick and easy on the eye versions of its hatchback models so it came as no surprise when the Clio Renaultsport 197 was launched. The limited edition Clio Renaultsport 197 F1 Team R27 is an added bonus though, with extra equipment and a more finely tuned chassis thrown into the equation.

Renault knows a thing or two about tuning its hatchbacks - The Renault 4 Gordini, Renault 5 turbo, Renault Clio Williams, Clio 182 and phenomenal Clio V6 are proof of that. As such, the tuned version of the new model was always likely to be a bit special and the French manufacturer hasn't disappointed.

The Clio Renault Sport 197, it gets its name from the 197bhp two-litre unit under the bonnet, isn't built alongside the other Clio models. Instead it's specially prepared at Renault's Renaultsport factory in Dieppe. As well as benefiting from the powerful 16-valve engine the Clio Renaultsport 197 also gets some butch bodywork and stiffened suspension. Quick, nimble and well specced for the price the 197 is another of Renault's fine efforts.

The company wasn't happy to leave it at that though, and so commissioned its Renaultsport facility to build a number of limited edition models, snappily named the Renault Clio Renaultsport 197 F1 Team R27. Designed to celebrate the manufacturer's two F1 World Championship wins in 2005 and 2006, R27 is the name of the 2007 model F1 car. Only 500 special order R27s are destined for the UK and each comes with GBP1500 worth of extra kit over and above the standard 197 including Recaro bucket seats, 17-inch Anthracite alloy wheels, window tints, sporty red brake callipers and the option of Liquid Yellow paint last seen on the Clio Renaultsport 182 and V6 models.

The R27 is the first model to use Renaultsport's Cup Chassis. The ride height has been dropped by 7mm compared to the standard 197 with the stiffness of the front springs increased by 27 per cent and a full 30 per cent at the rear. The floor itself is 10 per cent stiffer, making for flat cornering and super sharp handling.

Our verdict on the Renault Clio Renaultsport 197 F1 Team R27

More than just a tarted up version of the standard car the limited edition R27 boasts improvements in the handling department that make it a hugely enjoyable drive. The stiffened chassis and suspension makes the ride a little harsh around town, but more than make up for it the moment the road opens up. The rev happy two-litre engine is a gem while pocket rocket looks seal the deal.

The R27 is perfectly happy to be driven gently and isn't too hard on fuel when you do so. Naturally, the harder you push it the more expensive your journey is likely to be. Insurance premiums are likely to be higher than normal thanks to the car's performance credentials, but not astronomical. Of course, when you consider that the limited edition model comes loaded with an extra GBP1500 worth of equipment free, it's an even more appealing proposition.

The Renault Clio Renaultsport 197 F1 Team R27 isn't a car you buy for its practicality, but it does its best to help out anyway. The boot will take a suitcase or two and the rear seats will fold flat for bigger loads. It will seat four adults comfortably and head room is generous, but lifting kids in and out of the back will quickly become tiresome due to the limited movement of the front seats. Storage space inside is distinctly average.

Weighty steering, a slick gear change and beautifully light pedals all add to the driving appeal, while the control stalks, switches and buttons are laid out sensibly on the whole. The cruise control and speed limiter switch is tucked out of the way however, and the stubby column switches are unusual but not unappealing. The dials are easy to keep an eye on and the steering column is fully adjustable for finding the ideal driving position.

They might not look it, but the Recaro bucket seats are very comfortable, firm and supportive. There shouldn't be too many complaints from rear passengers either. Air-con comes as standard, but if you're after a pillow soft ride you might want to look elsewhere.

The hands free card is all you'll need to access the R27, but intruders shouldn't be able to make off with it thanks to an immobiliser and central locking with deadlocks. The car also plays host to the Renault Anti Intruder Device and window tints add a little extra privacy.

All the electronic aids you would expect to be present are including ABS with electronic brakeforce distribution, and switchable ESP. There's also a speed limiter, lest you get carried away. Front driver and passenger, front lateral and curtain airbags are all present and the front and outer rear seatbelts all feature pre-tensioners.

This is the R27's forte. It's wide rev range means that it's happy to trundle around town at under 4000rpm, but on an open stretch can be wound up to twice that. While the irrepressible two-litre engine provides the grunt it's the advanced Cup chassis that provides most of the laughs. Seven millimetres lower than the standard 197 chassis and with stiffer springs, it makes the car corner crisply. The only downside is a slightly harsh ride and the short gearing which, despite having a six-speed box, means the engine buzzes away at a frenetic pace on the motorway.

The R27 is the kind of car you are forced to sell as the patter of tiny feet is heard in the distance, rather than the kind of car you look buy. Kids would probably love the bright colours - but the same could be said of the contents of the medicine cabinet.

Many a young driver would jump at the opportunity to drive away from the test centre in an R27 and while its performance characteristics may be more suited to an experienced driver it's certainly tailored to a younger audience. Insurance groupings are not as high as you might imagine, but the initial asking price could be a tad higher than the average first time buyer's budget.

There are no issues with the build quality and even with its firm suspension the R27 manages not to shake itself apart over rough ground. Inside, the majority of the materials are carried over from less exclusive models and are perfectly acceptable, although issues like the ill-fitting and slightly flexible glovebox door hint at the use of lightweight materials in places. The rest of the panel gaps and fittings are tight and of a high standard and Renault's history of impressive hot-hatches means the R27 isn't lacking a quality image.

The Recaro bucket seats of the R27 have limited forward movement, which makes accessing the rear a bit of an issue for the less svelte. The length of the doors also means that opening them in tight parking spaces can be troublesome, although no more than any other three-door hatch. The R27 doesn't sit particularly low though, so there's no need to stoop on entry.

Neatly incorporated in to the stylish fascia, the Clio's sound system is made extra easy to operate thanks to controls mounted behind the wheel. These are less fiddly to play with than if they had been incorporated into the wheel itself. The R27 also gets a beefier sound system with six speakers in all. Sound quality is good if not class leading, and can be tailored to easily to individual tastes.

The standard, if you can call it that, Renaultsport 197 can be specified in five colours: two blues, red, black or silver and looks pleasant in all of them. The limited edition R27 version also benefits from the return of that old favourite - Liquid Yellow. Whether your car comes with the full set of decals is up to you, but you will be on the receiving end of the Recaro bucket seats, window tints, 17-inch alloys, red callipers and last but not least, a numbered plaque, all of which will help yours stand out from the crowd.

A poor turning circle makes manoeuvring in multi-stories something of an ordeal, but on the upside there's little problem judging where the R27 starts and stops even with the flared arches and no parking sensors. You'll need to steer clear of tall kerbs though, to avoid scratching the anthracite painted alloys.