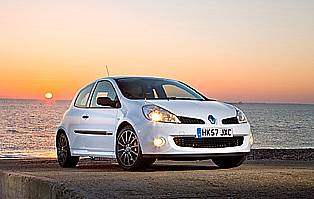 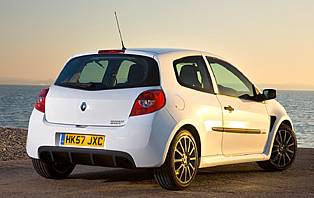 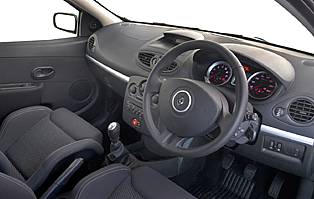 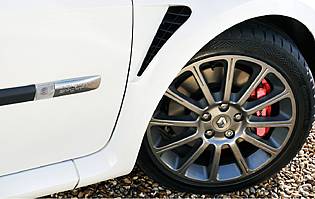 Renault has a long history of producing hot hatchbacks which successfully combine everyday practicality with high levels of driver entertainment. In recent years it has also introduced the popular Cup option, offering an even more focussed car at a reduced price. Following the popularity of the Renaultsport Clio 197 it has now introduced a Cup version, which represents the ultimate hot Clio.

The transformation from standard Clio to 197 Cup is dramatic, taking a tidily styled supermini and turning it into a car that doesn't look out of place on a racetrack. The most obvious changes are to the bodywork, as the Clio has flared wheelarches complete with air vents, a substantial bodykit and large alloy wheels. Further options include white paint and black alloy wheels for an even more distinctive look.

There are also changes inside, although these are mostly related to the deletion rather than the addition of equipment. The air conditioning and curtain airbags, standard on the regular Clio 197, are not fitted to the Cup model, while electric door mirrors, cruise control and speed limiter, Renault key card and reach-adjustable steering column have also been removed. As well as reducing the price, this also saves weight, although the air conditioning and airbags can be fitted at extra cost.

Aside from the suspension changes, the Cup is identical to the Clio 197 model, using a high output, naturally aspirated 2.0-litre petrol unit matched to a six-speed manual transmission. To deliver improved cruising ability, all Clio 197 models have been fitted with a raised final drive ratio, lowering engine revs for a given speed.

Our verdict on the Renault Clio Renaultsport 197 Cup

The Clio 197 Cup is an interesting alternative to the standard Clio 197, as it offers a subtly improved driving experience at a reduced price. The reduction in equipment is not as notable as the specification would suggest and given the car's thrilling entertainment levels, air conditioning and electric mirrors are rarely missed. Although the ride is significantly firmer and noise levels are increased, the Clio is still practically and sufficiently refined to be used everyday, making it almost as practical as the standard Clio.

The Cup is perfectly happy to be driven gently and isn't too hard on fuel when you do so. Naturally, the harder you push it the more expensive your journey is likely to be. Insurance premiums are likely to be higher than normal thanks to the car's performance credentials, but not astronomical.

The Renault Clio Renaultsport 197 Cup isn't a car you buy for its practicality, but it does well consider its sporting focus. The boot will take a suitcase or two and the rear seats will fold flat for bigger loads. It will seat four adults comfortably and headroom is generous, but lifting kids in and out of the back will quickly become tiresome due to the limited movement of the front seats.

Weighty steering, a slick gear change and beautifully light pedals all add to the driving appeal, while the control stalks, switches and buttons are laid out sensibly on the whole. The dials are attractive and the informative trip computer is a useful addition.

They might not look it, but the Recaro bucket seats are very comfortable, firm and supportive. There shouldn't be too many complaints from rear passengers either. The lack of air conditioning may reduce comfort levels in warmer weather.

The Cup does without the hands free card, but intruders shouldn't be able to make off with it thanks to an immobiliser and central locking with deadlocks. The car also plays host to the Renault Anti Intruder Device and window tints add a little extra privacy.

All the electronic aids you would expect to be present are including ABS with electronic brakeforce distribution and switchable ESP. Front driver and passenger plus front lateral airbags are all present, with the cost option of curtain airbags and the front and outer rear seatbelts all feature pre-tensioners.

This is the Cup's forte. Its wide rev range means that it's happy to trundle around town at under 4000rpm, but on an open stretch can be wound up to twice that. While the irrepressible two-litre engine provides the grunt it's the advanced Cup chassis that provides most of the laughs. Seven millimetres lower than the standard 197 chassis and with stiffer springs, it makes the car corner crisply. The only downside is a slightly harsh ride and the short gearing which, despite having a six-speed box, means the engine buzzes away at a frenetic pace on the motorway.

Although the regular Clio is a decent family car, the reduced comfort levels and restricted access past the optional sports seats do hamper its family appeal, although there is no less room on offer than the standard car.

Many a young driver would jump at the opportunity to drive away from the test centre in a Cup and while its performance characteristics may be more suited to an experienced driver it's certainly tailored to a younger audience. Insurance groupings are not as high as you might imagine, but the initial asking price could be a tad higher than the average first time buyer's budget.

There are no issues with the build quality and even with its firm suspension the Cup manages not to shake itself apart over rough ground. Inside, the majority of the materials are carried over from less exclusive models and are perfectly acceptable, although issues like the ill-fitting and slightly flexible glovebox door hint at the use of lightweight materials in places. The rest of the panel gaps and fittings are tight and of a high standard and Renault's history of impressive hot-hatches means the Cup isn't lacking a quality image.

The Recaro bucket seats of the Cup have limited forward movement, which makes accessing the rear a bit of an issue for the less svelte. The length of the doors also means that opening them in tight parking spaces can be troublesome, although no more than any other three-door hatch. The Cup doesn't sit particularly low however, so there's no need to stoop on entry.

Neatly incorporated in to the stylish fascia, the Clio's sound system is easier to operate thanks to controls mounted behind the wheel. These are less fiddly to use than if they had been incorporated into the wheel itself. Sound quality is also good, with a useful display mounted high in the dashboard.

As a weight-saving measure, the 197 Cup gets the dashboard from the entry-level model, which is not so soft to the touch and is plain black. Although less luxurious it feels more purposeful in this sporting car. As for the exterior, it is available in only three colours, the Racing Blue and Glacier White have a distinct motorsport flavour.

A poor turning circle makes manoeuvring in multi-stories something of an ordeal, but on the upside there's little problem judging where the Cup starts and stops even with the flared arches and no parking sensors. You'll need to steer clear of tall kerbs though, to avoid scratching the large alloy wheels.