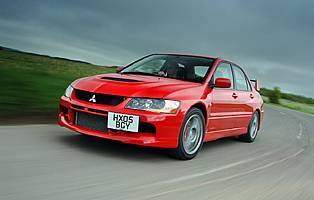 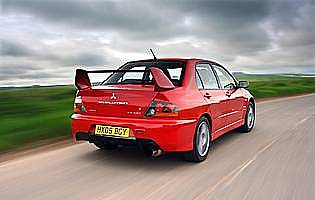 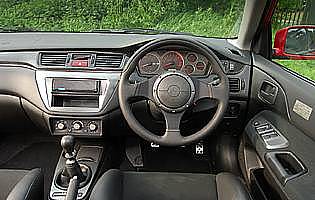 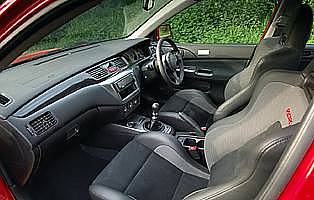 Mitsubishi's reputation has been built on good value cars and popular 4x4s, but alongside these conventional vehicles the firm has a long running performance model in the shape of the Lancer Evolution. With the basic principle of a four-wheel drive transmission and turbocharged engine wrapped in a saloon bodyshell, the Evolution IX is the most advanced version.

The Evolution has a strong motorsport heritage, and it is this performance ethos that gives the model such great appeal. From the outside the aggressive scoops and large rear wing give a clear indication of the performance available, and sitting in the heavily-sculpted driver's seat and grasping the Momo steering wheel leaves the driver in no doubt that the car is designed to be driven with enthusiasm.

The basic design of the Lancer's engine dates back to 1992, but it has been on the receiving end of numerous modifications and improvements to increase its performance. This iteration uses a variable valve timing system as well as turbocharger modifications for more power throughout the rev range. The effect is dramatic, as the Evolution pulls away smartly even at very low revs, yet at high revs when the turbocharger is working hard it provides rapid acceleration in every gear.

Delivering this power to the asphalt is a well-proven four-wheel drive system combined with a six-speed gearbox. More sophisticated than most, the Evolution uses an active centre differential and a 'Super Active Yaw Control' system to alter the amount of power delivered to each wheel. The end result is that the car can deploy its power with ease, and gives high levels of grip when cornering at speed.

All of this performance capability does little to detract from the Evolution's abilities as a family car. With the only change to the bodyshape being the addition of spoilers and scoops, the passenger and luggage space is equal to the conventional Lancer saloon. Although it may be more thirsty and noisy, the Evolution can combine the dual roles of performance car and family car.

Our verdict on the Mitsubishi Lancer Evolution IX FQ-340

Few cars can match the Evolution's performance at any price, but fewer still can also carry passengers and luggage with ease. The only compromises are the relatively poor fuel economy and firm ride, but buyers looking for a car of this class will find few alternatives that can match its all round ability.

In terms of overall value for money the Evolution is a strong performer, though in isolation some of the costs are high. Fuel consumption will be little higher than 20mpg, and the highly-strung engine needs super unleaded fuel. The car's insurance rating will prove a costly burden for the vast majority of drivers.

The saloon car origins mean good space for five passengers and luggage in the Evolution, with a relatively high roofline giving good headroom. The boot can swallow 530 litres of luggage, with a wide boot aperture for easy loading. The interior has decent sized door bins and a glovebox, although the width of the front seats does reduce elbowroom slightly for passengers.

The simple layout of the Evolution's dashboard makes it easy to operate, with familiar rotary controls for the air conditioning and uncomplicated column stalks. The instrument layout is informative, although the Evolution's competition heritage means that the rev counter is placed centrally with the speedometer offset to the left. This in itself is not too much of a problem, but the graduations are close together and the numbers very small, making it difficult to read.

As the Evolution is still a family car at heart, comfort levels are good for something with this level of performance. The ride is understandably stiff, but only bigger bumps may cause an unpleasant shock to be delivered to the cabin. For the most part, the ride is acceptable. Front seat passengers sit on Recaro seats that are first class, providing excellent support and comfort even over long distances. Rear seat passengers fair less well, though the rear bench is far from uncomfortable.

As well as commonplace features such as remote central locking and an immobiliser, the Evolution features the Mighty Dot security system, which leaves a security mark on the vehicle's major components. A Tracker system is also available, as the car can be a target for thieves.

The Evolution has a good complement of passive safety features, with twin front airbags, seat belt pre-tensioners and side-impact door bars. More importantly, the high level of grip and braking power, including ABS, means the Evolution will stand a better chance of avoiding an accident in the first place.

The performance aspect of the Evolution's abilities is key to its appeal, and owners will gain the most satisfaction from this. The highly developed 2.0-litre engine delivers large power and torque outputs, yet it is flexible and docile when driven at low speeds. The six-speed gearbox has a quick and smooth action, and the four-wheel drive system operates unobtrusively, allowing all the power to be transferred to the road. The steering and clutch are light and progressive too, yet when the Evolution is driven at speed, all these elements work seamlessly to provide a highly impressive driving experience.

As a family car the Evolution provides a credible compromise. It delivers sufficient practicality to be used by a family on a regular basis, yet it is as fast and as capable as many supercars. Some families may find the ride too harsh or the drone of the exhaust too loud, but these are small demerits for a car that can perform the family role with ease.

The Evolution may appeal to first time drivers, but its performance and running costs are likely to be far beyond most of them. Its docile nature makes it easy to drive, but with such a high top speed and rapid acceleration it will be too fast for the inexperienced. With fuel consumption around 20mpg and a 55-litre fuel tank, petrol stops will be frequent, and insurance costs will be excessive. Many insurers would refuse to cover a first time driver on a car with this level of performance.

Sitting inside the Evolution, it is clear that it is based on a more humble family saloon. Some of the materials are quite plain, but the overall look is tidy, and the interior feels well constructed. The overall impression is one of a well built car. In terms of image the Evolution is almost in a class of its own. With the rally car heritage and a reputation as a performance car bargain, the Evolution badge is worthy of the respect given to it by enthusiasts.

Only front seat occupants will have any trouble getting into the Evolution, as the heavily-bolstered seats do make it more awkward to sit down. Rear seat passengers however will be untroubled, as the decent door opening and bench seat allow straightforward access.

The stereo system in all Evolutions is dealer fitted and therefore may be a unit from a number of manufacturers. The six-speaker set up delivers respectable sound quality, helping to filter out road noise. The use of an aftermarket unit does mean that they are narrower than most original specification units, which can make them more difficult to operate.

The majority of the interior is black or grey, with only small carbon fibre inserts to liven up the dashboard. However, the steering wheel is a good size and trimmed in leather, while the sports Recaro seats are a mixture of leather and Alcantara which gives a more quality feel.

Clearly visible extremities and well sized door mirrors make the Evolution almost as easy to park as the regular Lancer, except that the large rear wing mounted on the bootlid does reduce rear vision slightly. Low profile tyres fitted to the 17-inch alloy wheels make the alloys prone to kerbing.

BMW M3 Three door only, but usable every day and room for passengers