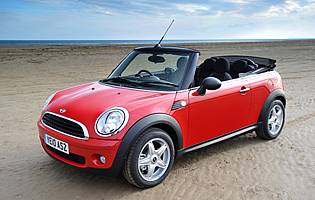 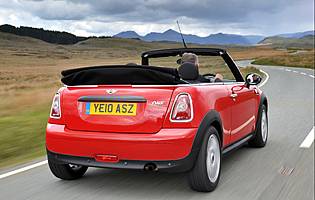 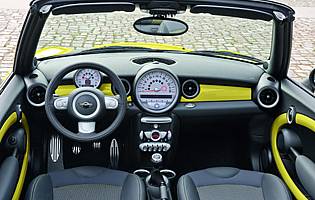 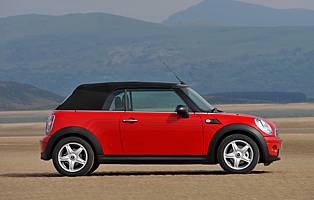 The Mini Convertible has been a key model in the expanding small car line-up since it's introduction in 2004, but until now has only been available in Cooper, Cooper S and high-performance John Cooper Works variants. The introduction of the Mini One Convertible brings a new entry point for the range, complete with more economical, less powerful engine.

The Mini Convertible range was facelifted and updated in 2009, five years after its initial launch in 2004. 2010 has seen further revisions to the line-up, however, as Mini has taken the opportunity to introduce a new, entry-level, Mini One Convertible alongside a raft of technical changes across the Mini range.

The One Convertible also has less to boast about in terms of standard equipment, however, the exhaustive range of optional extras remains available for Mini customers who want to specify a well equipped vehicle without incurring the additional running costs of the more powerful models. As such, Mini expects the One Convertible to take over as the best-selling drop-top Mini model.

Our verdict on the MINI Mini One Convertible

Given that Mini expects the One Convertible to be the most popular soft-top model, it's a surprise that it has taken this long to be introduced. The model loses little of the exciting driving experience with the power downgrade, the sharp handling and precise controls making it just as entertaining behind the wheel, if a little slower. The huge range of customisation options remains, too, meaning owners can still pick and choose equipment and trim to suit their needs and, of course, the open air aspects adds to the Mini's inherent charms.

The lower entry level purchase price, improved engine efficiency and stop-start technology all help keep the Mini One Convertible's running costs to a minimum. Insurance for the desirable model will be higher than many, less-flashy alternatives however, and the long list of tempting options can significantly boost purchase price.

The boot remains no rival to a conventional small car, but is not restricted by folding the roof. The rear seats can fold, which is a useful bonus. Storage space in the cabin isn't overly generous, though. The cup holders are welcome but the door pockets are modest at best.

Dominating the car's fascia is a modern take on the old Mini's familiar main dial. It's grown in size over the first 'new' generation Mini, and is easy to read but rarely in the driver's eye line. The secondary display over the steering column is more sensible, and includes the trip computer - a speed display is helpfully available. The toggle switches remain for the minor controls, while without the multi-function steering wheel operating the audio unit can prove fiddly when on the move. The optional Openometer - a cute function that shows the amount of time spent with the roof down - obscures flow from the air vent to a degree.

If you want a plush, soft-riding car you'll need to look elsewhere. The Mini, in whatever guise, is a little on the firm side, be it the ride or seat support. For many this is actually a positive attribute, especially when pushing on. Wind noise is very low with the roof up, and acceptable roof down with the deflector in place.

Any convertible with a fabric roof is always going to be vulnerable to attack, and it's something you can do nothing about as only something with a folding metal roof will be better. However, elsewhere remote central locking, an alarm and immobiliser are present for your peace of mind.

It's good to see that all the basics are covered in the safety department. Twin front and side airbags are present across the range, and dynamic stability control is also standard fit, which can be turned off if you wish too fully exploit the potent handling. Rollover protection is also present to protect passengers with the roof down.

Slightly down on power compared to the Cooper model and with a little over half the output of the Cooper S, the Mini One Convertible never-the-less makes the most of its output with the same charismatic, go-kart-like handling as the rest of the range. Power delivery form the new 1.6-litre unit is progressive and punchy, the gear-changes sporty and direct and the in-corner grip excellent. The steering is also delightfully sharp and responsive.

The Mini Convertible is an unlikely family car. The two-door format, lack of rear space and compact boot dimensions rule it out of all but the most basic of family duties. However, there's no reason why it can't perform as the second family car.

More affordable in the new basic specification than the previous Mini Convertible line-up, the Mini One Convertible boasts even more appeal as a first time purchase.

The Mini has such a broad spectrum of appeal and such a range of customisation options that trim level has hardly any effect on the street cred of the model - serving rather as a barometer of engine performance. Drivers who do feel the need for the more powerful engine can feel just as satisfied with their Min One Convertible as owners of the higher trim level models. There have been reports of a few quality niggles over time, but nothing that hasn't been quickly rectified. Now well established and with hundreds built every day, quality has been improved.

Roof down motoring flatters the Mini Convertible in many ways. Access and egress is very easy despite the purposely low seating position. With the roof up you sometimes need to take more care - especially when exiting the car.

As the entry level model, the Mini One Convertible gets the basic six-speaker, CD and radio set-up integrated into the stylised centre console. As always with the Mini range, a wide range of upgrades are available as cost options, but don't expect a multi-function steering for the base price.

A very Wide choice of trim designs and colour combinations are available, ensuring an almost unrivalled level of customisation possibilities. As elsewhere in the Mini Convertible range - bright colours work well. Cloth seating is standard but of a very high quality. Unlike the Cooper and Cooper S models, the One Convertible comes with steel wheels unless otherwise specified and paid for.

With the roof down it's an easy task to reverse park a Mini Convertible. The assisted steering is helpful and parking sensors are a real bonus for the entry level model. With the roof up the view rearward is reduced and the rear screen is small, restricting rearward visibility.