The front is distinctively 'Lexus' 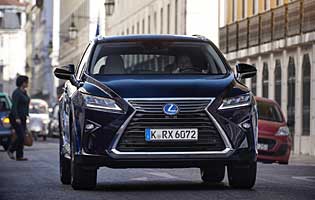 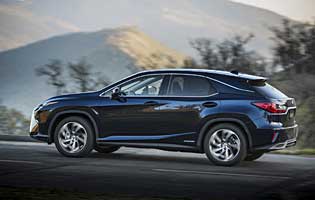 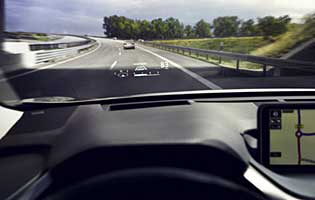 The RX is one of the most important cars in the Lexus stable. It has always enjoyed strong sales in Europe, and was one of the first luxury SUVs introduced in the UK. That means that this is an big launch for the manufacturer - expect to see plenty of these on the road.

In line with a wider strategy from Lexus, the RX comes with either a petrol engine or a petrol-electric hybrid. There's no diesel, a slight problem for some UK buyers that should start to become irrelevant as we shift away from oilburners. It's one of the greenest SUVs about, though it can't quite match the Outlander PHEV in real-world fuel consumption.

Drivers who are used to conventional internal combustion engine vehicles will be impressed with the hybrid RX. Those who've driven other range-extenders might be disappointed that driving the RX for any distance on electric mode is unfeasible, as the petrol engine will kick in after a few metres.

The external design is one of the most divisive elements of the car. Gone are the days when Lexus would produce large, barge-like and slightly dowdy saloons. The jagged lines of this SUV are very current, as are design tweaks like the sequentially-lit LED indicators.

The selling point is the interior. Generous equipment, opulent decor and high levels of comfort (in the front, at least) stand it apart from many other SUVs - it's more in line with a Range Rover than a Qashqai. The hybrid powertrain is whisper quiet apart from during acceleration, making the RX one of the most relaxing cars to drive.

Our verdict on the Lexus RX 450h

The Lexus RX is an immensely likeable, enjoyable and pleasing car to drive. It isn't the fastest or best-looking, and its badge probably can't quite match the likes of Land Rover in terms of prestige. But - rear headroom aside - it's more practical than posh, and that hybrid powertrain goes a long way towards greenness when driven sensibly.

It's an expensive, premium car. While it starts at GBP40k, it's likely to cost GBP20k more than that for the hybrid version in the trim that you want. At twice the price of the (arguably more practical) Mitsubishi Outlander PHEV, the RX is a bit of an indulgence.

435 litres of boot space is pretty cavernous, but falls behind some rivals. The larger interior cabin is somewhat noticeable but that rear space is compromised by the sloping roofline. Most premium estate cars are more comfortable to sit in the back of.

Controls range from conventional and familiar (the gear selector) to comfortably innovative (the little 'mouse' that controls the cursor on the infotainment system). Everything's in the right place and the whole cabin - from the contactless charging point to the cupholders - are all very considered.

The Lexus RX is one of the most comfortable cars to drive at the moment, thanks to both an incredibly ergonomic interior layout and a massively quiet hybrid powertrain. The rear seats, though, are cramped - suitable for teenagers but not adults over long journeys.

It comes with remote central locking and other standard security systems you'd expect to find on a premium car. It does make use of keyless entry methods, such as the electrostatic elbow-waving system on the boot lid.

The Lexus RX attained a five-star Euro NCAP rating, with 91% adult occupant protection and 82% child occupant. It has ISOFIX points in the rear seats. Safety warnings are attentive and alarms are loud.

It's definitely not a driver's car, as the CVT gearbox and hybrid powertrain make you feel detached from any progress you're making. The appeal here lies in the relaxing and comfortable environment in the cabin, rather than the pleasure of driving it enthusiastically. Body roll is present but controlled, and the RX absorbs bumps at all speeds.

Smaller families could make good use of the RX, as there are ISOFIX points in the rear seats and plenty of boot space. But as the children get older and taller, they may start to find the rear seats a tad claustrophobic. It's also an expensive choice - buyers with GBP60,000 to spend have plenty of alternatives to pick from. Low CO2 figures make it a good company car choice.

It's a very large and expensive car. This would suit an affluent, young family - there's nothing about this car that makes it attractive to an inexperienced driver.

It's solid throughout, especially on the inside. It is let down by some scratchy, cheap-feeling plastics in the rear of the cabin, but across the whole interior the feeling is generally one of quality. All the switches are well-weighted and feel sturdy enough to survive family life.

Getting into and out of the RX is easy. The door apertures are wide and the boot lid can be opened without touching it - waving near the door will theoretically trigger it to open. This takes a bit of trying but once you have the method, it means opening the boot by putting your elbow near it. Very useful when carrying heavy loads.

There are 15 speakers in the awesome Mark Levinson sound system. It's probably one of the coolest features of the car, as the ensemble redefines what you expect from a car stereo. It's noticeably better than most cars, even to non-enthusiasts. The interface is easy to use, the amplifier (835 Watts) is designed to draw low power, and the volume will automatically adjust depending on speed and ambient noise levels.

The RX used to come in a rather nasty metallic beige, but the colour du jour seems to now be metallic aubergine. There are a wide number of colours ranging from understated to garish.

It's an SUV with fairly large dimensions, but a good reversing camera and relatively good visibility all-round does make it a bit less cumbersome to park than its previous iterations. The doors open wide, but not so wide as to make them impractical in Britain's cramp supermarket car parks. The birds-eye-view are helpful for some people who struggle to picture a car's turning circle in a carpark.