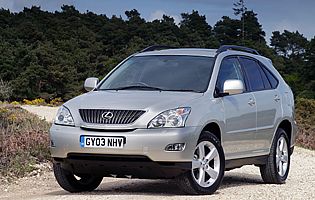 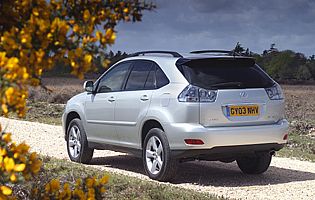 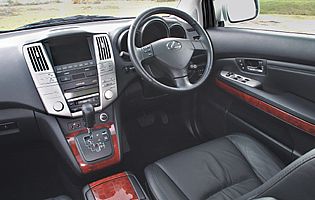 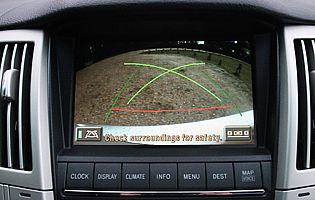 Lexus' RX300 might not be the first premium Sports Utility Vehicle (SUV) that springs to mind when assessing the merits of the current crop of high-rise luxury 4x4s, but this Far Eastern alternative to BMW's X5 and Mercedes' ML-Class offers exceptional value and is refined on road.

Spend a few moments with the RX300 and you'll soon be wondering why there are so few on the roads. The car is packed to the rafters with creature comforts and safety kit, and possesses one of the most refined drivetrains this side of a Rolls-Royce Phantom.

Easily beating its European rivals for value for money, this premium SUV has all the right components - except one crucial attribute: prestige. Unlike the X5 or ML-Class, the RX lacks the right badge in the eyes of many image-conscious consumers. Such snobbery is refreshingly absent from the minds of US buyers though, as the car is sold in vast quantities to people more interested in build quality, reliability and affordability. And when something delivers, they tend to stay loyal, which is why the RX is such a hit Stateside.

Things are looking up though, as the latest generation model has benefited from a facelift and a series of thorough mechanical revisions. In a bid to compete against petrol X5s, Volvo XC90s and Mercedes MLs, the RX300 boasts a revised 3.0-litre engine, a new five-speed auto gearbox, a choice of conventional or air suspension and a vast array of safety equipment. These features, plus the car's ability to tackle mild undulating terrain thanks to its permanent four-wheel drive, should go a long way to silencing the critics and attracting more people to the marque.

With so few on the road relative to the numbers of X5s, the RX300 affords owners a perverse level of exclusivity European makers can only dream of. The cabin decor may not be to everyone's liking, what with the substantial slabs of high-gloss wood, but there's no denying that the car has presence and should perform faultlessly - even in the hands of the most demanding driver.

Our verdict on the Lexus RX300 SE-L

The RX300 valiantly upholds Lexus' long-standing reputation for offering a premium product for less than the opposition with all the right toys, while displaying a level of refinement that is nothing short of exemplary. Only the lack of more horsepower or, better still, a diesel engine prevents the RX from receiving top marks for its abilities.

Considering what you're getting, the initial outlay for an RX is reasonable, as to spec a rival to a comparable level would cost you dearly. Minor servicing intervals are every 10,000 miles, with the major interval at 20,000 - a surprisingly conservative schedule. Company users are penalised less for choosing an RX over the more costly BMW X5 and Mercedes ML, thanks in part to the Lexus' lower CO2 figure. While the RX cannot match the gravity-defying residual values of the X5, it performs well considering its modest following outside the US.

For what is essentially a high-rise executive car, the RX offers generous amounts of space both front and rear. Headroom is good, and the ability to seat adults in the back with cubic inches to spare is welcome. Rear loadspace is equally abundant at 439 litres and the SE-L's powered tailgate is a boon when loaded down with armfuls of shopping. The rear bench splits and folds for larger loads, plus there's the usual sprinkling of cubbyholes around the cabin.

Clear, crisp and different, the RX's speedo and associated dials are an object lesson in clarity. The same is not true of the car's main audio controls however, which are small and often require a second glance to locate the desired function. Thankfully, frequently used controls are also on the steering wheel. Also welcome is the car's central display. Most functions can be accessed from this screen, with the sat-nav and reversing camera particularly easy to use. The same is true of the console-mounted gearlever, which falls easily to hand.

The car's plush, leather-covered seats (not the base model) are wide yet supportive, and despite running on 17 and 18-inch wheels depending on the model, the car absorbs urban road undulations better than most SUVs in this class. Getting comfortable is no chore thanks to the multitude of electric adjustments for the front seats, and both engine and wind noise has been kept to a pleasing minimum when on the move.

The familiar double act of immobiliser and alarm are standard fit on the RX300, operated by the keyfob. Given the fact that any premium SUV is a highly sought-after trophy by the criminal fraternity, a third-party tracking device would be a wise investment. In true Premiership footballer style, tinted privacy glass for the rear and side windows is standard across all three variants.

Lexus, and parent company Toyota, is rapidly becoming a credible alternative to the likes of Volvo in the race to make the safest cars, if the amount of kit heaped on the RX is anything to go by. Aside from the now expected plethora of kit such as ISOFIX mounting points, anti-lock brakes and all manner of electronic traction aids, the RX features nine airbags. The odd one out being a driver's knee bag located under the steering column. Boosting visibility at night are high intensity discharge (HID) headlamps, plus the option to have them follow your steering input.

Having to strike a balance between pounding Tarmac safely and remaining composed with the, admittedly slim, chance of being driven off road is no mean feat. The RX is no match for the class leading BMW X5, but it will faithfully follow instructions from the helm and can be driven with a surprising degree of enthusiasm. It's in these situations that the air suspension reigns supreme, but the party is spoiled by steering that lacks feel and an engine devoid of any serious grunt.

The premium SUV is often the weapon of choice for affluent families, and it's easy to see why. Despite their obvious practical uses, people carriers rarely exude the same level of prestige as an SUV of this calibre. That the RX doesn't possess seven seats is irrelevant; it's plenty roomy enough for most families and boasts a boot large enough to swallow all the lifestyle gear you could wish for.

Any car costing as much as the RX is unlikely to be on the shopping list of the first time buyer. Purchase price aside, the RX300 will do nothing for the confidence of a nervous novice. Parking such a large car requires practice - hardly something likely to be in abundance if you've just ripped up your L-plates.

Quality is without reproach both inside and out, as Lexus has amassed an enviable reputation for constructing cars as good as the German establishment. The attention to detail is commendable, and the overall feeling you get is of a car that's designed to last without feeling utilitarian in any way. Lexus' perceived image is less clear-cut, though. Seen as gate crashing an exclusive party for German execs, the RX is often overlooked by buyers seeking greater badge kudos.

While getting up into the RX is par for the course for SUVs of this size, the flagship SE-L's air suspension helps redeem the car somewhat with its adjustable ride-height. Pressing a button lowers the car to a more user-friendly 'Access Mode' height, allowing occupants an easy method of entry and egress. The electrically operated tailgate fitted to all but the base model is surprisingly useful, as is the powered steering column that moves out of the way when you exit.

Lexus' reputation for fitting its cars with top-notch audio remains intact with the RX300. Buyers of the base and SE cars can experience a well-sorted, eight-speaker system that can swallow six CDs via an in-dash changer. SE-L-badged cars get the firm's trademark audiophile-spec, 11-speaker Mark Levinson system with the same disc changer. All cars come with steering wheel-mounted controls. Optional on the SE and standard on the SE-L, the firm's Navigator sat-nav is clear, easy to programme and one of the best systems around.

There is a certain Judge Dredd-look about the RX300, what with its imposing stance and angular rear window layout. With that in mind, black is a surprisingly flattering exterior colour for the high-rise Lexus. Silver is, predictably, another sound choice, and is more likely to boost the car's residual value. Save for the base model, leather is standard, ensuring the RX's cabin looks suitably inviting. Alas, the wood decorating the centre console cannot match the quality of the European competition.

The RX is a large car no matter from what angle you view it. The car's big, electrically adjustable mirrors help, as does the ingenious Parking Assist Monitor. Similar in principle to the set-up on high-value Nissan Primera's, the view from a rear-facing camera is fed to the RX's multifunction display. Although coloured guidance lines help you place the vehicle, practice is required before you can trust it fully.

Same size as the main wheels, adding extra peace of mind when driving off road.

Mercedes ML-Class getting old now, but still talented when the going gets tough