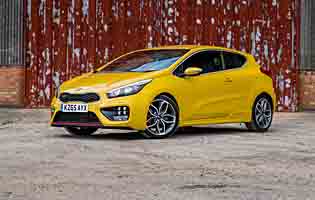 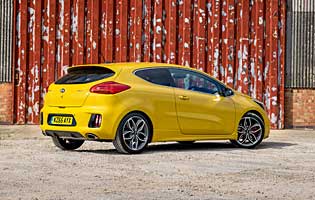 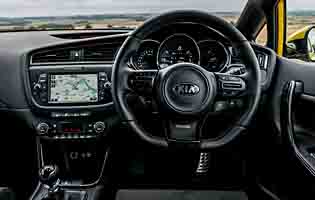 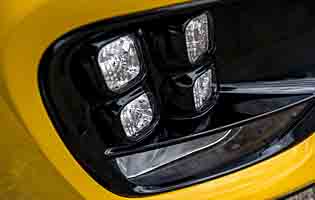 Kia's regeneration of its entire range continues at pace, but one thing that has been missing is a genuinely sporty offering. Now that has changed as the Korean manufacturer has added the new GT model to the Cee'd and Procee'd ranges, bringing with them mechanical and design changes to create a hot hatch available in three and five door guises.

The first generation Cee'd was a landmark car for Kia as it was the first clean-sheet design produced with European buyers in mind and the finished article demonstrated just how far the manufacturer had come in a short space of time. The second generation car continued to push with improved quality and a more eye-catching design.

The entire Cee'd and Procee'd model ranges have been facelifted and those improvements have now been added to the GT models. In particular the GT benefits from retuned suspension, with stiffer springs and bushes plus increases in the damper bound and rebound rates to give sharper responses. The Flexsteer system which varies the amount of electric power steering assistance is deleted on GT models.

Visually the Procee'd GT also gains the restyled front bumper and grille appearing on the regular Cee'd although in the case of the former they have their own modifications. The lower air intake is designed to feed the turbocharged engine and is highlighted with red piping, while unique 'ice block' LED lights are eye-catching. A new design of 18-inch alloy wheel is standard on GT models too.

Our verdict on the Kia Procee'd GT

Kia's first attempt at a hot hatch has produced a car that has good looks, a strong specification and delivers a peppy, entertaining drive. Buyers looking for a seriously hot hatch may want to look elsewhere, but for those seeking something quick but usable and comfortable the Procee'd GT strikes a good balance between the two.

Thanks to the efficiency of the turbocharged petrol engine the Procee'd GT's fuel costs should be relatively modest compared to some rival offerings. Insurance costs will be a little higher than a regular Procee'd but again not as high as some offerings, while running costs will be higher than average but not expensive.

While the Procee'd sacrifices two rear doors for its coupe looks it has the same passenger and luggage space as its five-door equivalent. The front seats are generously proportioned and there's good head and legroom. Space in the rear is also good, although the C-pillar does mean a lack of light which can make it feel a little more cramped. The boot is a good size however and like the five-door will fold for added capacity.

A straightforward layout is one of the best elements of the Procee'd's cabin. The large touchscreen is placed at the heart of the dashboard with the climate controls clearly sited below. The steering wheel controls are numerous and require a little acclimatisation but the wheel itself is a good size and shape, with the instruments behind incorporating a useful trip computer.

The Procee'd GT makes a strong case for being one of the most comfortable hot hatches on the market. The front seats are very supportive and the cabin is comfortable; features such as heated seats and a heated steering wheel are welcome additions. Noise levels are well contained too, even when the engine is extended. The ride quality is impressive too and very similar to that of the standard car.

The more racy styling will get the Procee'd in GT form more attention but all versions come with an alarm system, an engine immobiliser and remote central locking, with the option to switch on automatic 'drive away' locking too.

As standard all Procee'd models are fitted with ESP, ABS with Brake Force Distribution and hill start assist, plus the reassurance of tyre pressure monitoring. This second-generation Procee'd is also based on a new platform with additional body strengthening, and should the worst happen there are front, side and curtain airbags.

Right from the off the Procee'd GT offers a pleasingly sporty feel. The 1.6-litre turbocharged engine offers good torque and flexibility throughout the rev range although it never feels especially fast and behaves more like a large-capacity naturally aspirated unit. The high-ratio steering set up means quick turns can be made with ease even though there is limited feel through the wheel itself. The suspension is very well judged however, limiting body roll without delivering a harsh ride.

Three-door cars rarely make good family transport as access to the rear requires additional effort, and in particular the Procee'd's occasionally fiddly mechanism isn't a help. However there is the space available for the persistent family, and the boot is certainly large enough to swallow the trappings of family life.

It's quite likely that new drivers will be attracted to the Procee'd but the GT version is probably not best suited to their needs. The relatively high performance and associated costs in terms of fuel, insurance and maintenance will be beyond the means of most, although a more humble Procee'd would fit the bill.

Kia's continual, steady improvement in quality with its generation of cars and the Procee'd GT is at least as good as some European rivals if not better. Good materials, smart design and sturdy build combine to make the Procee'd feel well worthy of its price tag. The image of Kia cars has gone the same way, and the brand now competes on level terms with rivals rather than just on pricing levels. Whether it has the kudos to support a sporty car remains to be seen.

The Procee'd designation means a three-door configuration, with the consequence of a long single door on each side. Although not too heavy a careful hand is required due to their size, but front seat passengers can easily climb aboard once past the substantial side bolsters. Those same seats slide and tilt forward to allow relatively straightforward access to the rear, although it's not ideal for taller folk. The tilt and slide mechanism can be awkward to use though, occasionally refusing to slide back or return to its original position.

As standard the Procee'd GT comes with a 7-inch touchscreen system including satellite navigation, USB input, DAB radio and even a reversing camera. The system works well, with prompt response from the screen and the option to also use buttons surrounding the screen to also operate the various functions.

Finished in the signature mustard yellow of the test car the Procee'd GT certainly stands out, but with the subtle red highlights a variety of colours would work well, from the prominent to the subtle. Inside it's a similar story with the largely black-finished cabin lifted by the addition of chrome flashes, red stitching and contrast grey panels on the leather seats.

Three-door coupes are often hampered in terms of vision over the shoulder and the Procee'd is no different, thanks to its substantial C-pillars. However reversing sensors are standard on all models and this GT model benefits from the addition of a reversing camera. The electric power steering is also very light, making it otherwise an easy car to park.

Skoda Octavia vRS More powerful and spacious, and close on price. No three-door option however.