XK remains a handsome car regardless of the model 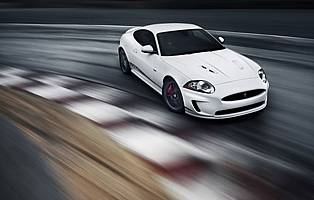 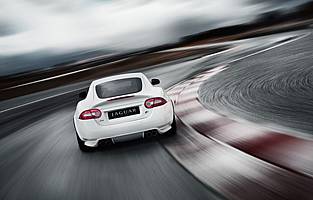 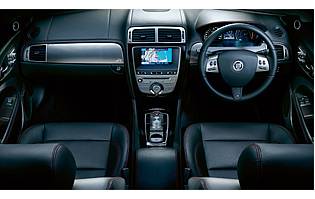 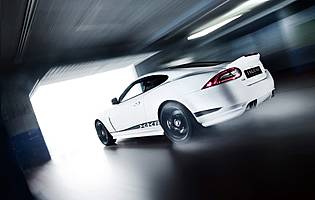 A firm favourite amongst enthusiasts and a strong image-builder for the brand, Jaguar's 'R' models offer huge performance and engaging handling alongside the expected levels of comfort, luxury and exclusivity. To take on yet bigger challenges Jaguar now offers the option of a Speed Pack on the XKR, allowing greater use of its performance.

Despite now being the oldest car in the Jaguar range, the XK is a highly capable machine in any of its guises. The sophisticated aluminium construction and the impressive range of V8 engines puts the XK on a par with pricier opposition. The same applies to the high-performance XKR, which has supercharged power to make it the fastest car in the range.

The Speed Pack is an addition to the range, and the price of the pack indicates the amount of engineering that is required to make it a reality. The most obvious visual change is body-coloured side sills and rear diffuser, with a chrome finish to the window surrounds, grilles and side vents too.

The addition of the Speed Pack allows the driver to maximise the huge performance potential, even if it will only be on de-restricted roads or race circuits. The car's electronic speed limiting device has been tweaked, pushing the maximum speed up from the standard 155mph to a huge 174mph, although the power on offer would allow it to go further if unrestricted.

With the extra potential for high speed, this version of the XKR also benefits from aerodynamic tweaks such as a revised front splitter beneath the bumper and a larger rear spoiler, cutting lift at higher velocities. A further tweak involves the Active Differential Control reducing steering sensitivity at higher speeds, increasing stability and giving the driver greater confidence.

Our verdict on the Jaguar XK XKR Speed Pack

Although the biggest changes on the XKR Speed Pack appear to be on paper, the reality is that the better aerodynamics and increased top speed underline the fact that the XKR is an enormously capable car and should still be on the shopping lists of the lucky few.

There's no hiding the fact that the XKR will be an expensive car to run. Fuel, insurance and servicing costs are all in the executive performance bracket. Although the car's 5.0-litre V8 boasts modest consumption and emissions levels, if driven enthusiastically you will still be stopping frequently to fill up.

The XK is not a small car, yet its cabin is more snug than spacious. Two adults can sit in comfort without rubbing shoulders but the downside is only a modest level of oddment storage - a little frustrating if used for long journeys. The car's boot is reasonable though, and can swallow a few soft bags with ease.

The central colour display remains but the famous J-gate gear selector has gone, replaced by the XF's clever rising and falling rotary controller. This has also uncluttered the centre console. Elsewhere, the traditional Jaguar dials are still there and the switchgear has the look and feel of genuine quality items.

The XKR is no different from any other Jaguar in this department. Front seat occupants enjoy beautifully shaped seats with a large range of adjustment and decent legroom - the rear seats are purely for decoration. On the road, the car is hushed and ride comfort is excellent for something with so much performance potential.

With a car like this it's important to feel secure. Jaguar provides a comprehensive security package including a cutting-edge alarm system and a keyless-go system. There is, however, no substitute for a safe garage and a tracking device.

For all its performance potential, the XKR is no different to any other XK and comes with a high level of safety equipment. Airbags and electronic stability aids are in plentiful supply, while the bonnet can pop up in the event of a pedestrian impact to reduce injury.

Being less intimidating than, say, a Porsche 911, Jaguar's XKR offers drivers the ability to make rapid progress in a comfortable and refined environment. Selecting the sport mode sharpens responses up, giving a more direct driving experience and fully unlocking the 5.0-litre V8 engine's potential. You never feel shaken or stirred, though. The XKR's ride is always on the right side of firm despite the fitment of the car's large alloy wheels.

It would be wrong to be critical in this department because the XKR hasn't been designed to be a family car. The rear seats are little more than eye candy, for starters. The car's boot is a reasonable size, making the Jaguar versatile in the context of being the second car in the household.

While the XKR is an easy car to drive at modest speeds, its potential ensures that only an experienced driver will likely be able to confidently take the reins at higher speeds. And that's before you factor in the running costs - especially insurance.

The numerous updates for the 2010 model year brought an extra shot of quality to the XKR which is unlikely to leave anyone feeling short-changed by its luxury feel. High performance cars like the XKR also do a great deal to shake off Jaguar's 'older driver' image of the past, and with the right specification there is nothing to choose between it and more modern offerings.

Being a coupe, this XKR affords front seat occupants easy access and egress. The rear seats, on the other hand, are little more than ornamental. The XK coupe is also a practical car in a conventional hatchback sense. Consequently, loading and unloading is easy.

As well as refinement, Jaguar is also well known for its audio systems. Keen to offer buyers the best of everything, the standard fit unit should satisfy all but the most demanding audiophile. It's MP3 and Bluetooth compatible, and offers the ability to store music on a hard drive plus the ability to connect an iPod.

There's nothing like cloaking this much performance potential in dark colours, and the XKR wears them well. The optional Black Pack, only available on XKRs specified with the Speed Pack, gives the car a considerably more sinister and purposeful look. Inside, buyers can stick with a traditional Jaguar wood design or go for a more modern treatment of black leather and aluminium - sure to prove popular among younger buyers.

Although the rear view out of the XKR isn't that special, the car's parking sensors make up for this in a surprisingly good way. You will have to be careful as the car's beautiful alloy wheels do look vulnerable. Elsewhere, the steering lightens up pleasantly at low speeds.