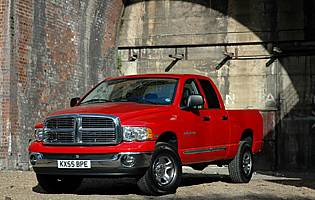 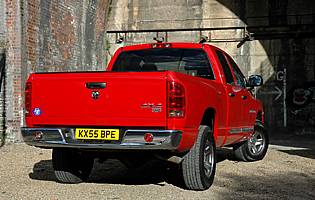 Staking a claim as the biggest pick-up available in the UK, the Dodge Ram is a piece of pure American culture that has made it across the Atlantic. Available in two forms, the Ram is a true giant that can carry six people as well as a great deal of cargo in its flat bed.

This Ram is one of a long line of Dodge pick-ups to wear the famous badge, although in the UK it is less well known. Dodge has decided to bring in both the 1500 Laramie and the high performance SRT-10 versions in limited numbers to satisfy the demand which would otherwise by met by grey importers. This also means it comes with the reassurance of a three-year warranty and full UK type approval.

The first and most obvious feature of the Ram is its size. At nearly six metres in length and almost two metres tall, it has incredible presence and dwarfs other commercial vehicles as well as towering over conventional cars. With five proper seats and an occasional sixth it packs a lot of capacity into its length, while the folding rear bench offers versatility and the security of lockable stowage area.

Under the giant bonnet lies a suitable engine in the shape of the 5.7-litre HEMI V8, which is used in a number of Chrysler group products. Even though it has to cope with almost 2,500kgs of pick-up, it delivers remarkably rapid performance, enough to keep it far ahead of other pick-ups and close to the tail of hot hatchbacks. It is also an easy machine to drive, and the automatic gearbox makes it easy to get the best out of the engine.

While in many respects the Ram is a practical vehicle, in the UK it is far more of a handful than in its native USA. Many roads and parking bays were not designed for something as long and wide as the Ram, and occasionally it can become difficult to negotiate urban routes.

Our verdict on the Dodge Ram Quad Cab 1500 Laramie

Although something of a novelty in the UK, the Ram offers an extraordinary amount of vehicle for the money. It has presence quite unlike anything else, impressive performance, superb load carrying ability and good comfort. Running costs will be high and small villages and towns may be out of bounds, but for a keen buyer it will be a delight to own.

This is one area where the Ram may struggle, for although the purchase price is very reasonable, running costs are likely to be very high. Fuel economy will rarely exceed 15mpg, and insurance is also likely to be high.

Space is one thing that the Ram is not short of. Front seat passengers have stacks of head and legroom, even in the middle seat, and although the rear is less generous, it is still big enough for six people. The rear load area is nearly two metres in length and 1.5 metres wide, making it big enough to cope with most loads.

The layout of the Ram is simple and easy to use, with clear dials and switchgear. The size of the dashboard means the ventilation controls are something of a stretch, but the column mounted gearshift frees up useful space on the floor of the cabin.

The Ram is a comfortable vehicle to travel in, thanks to the decent seats, largely smooth ride and respectable noise levels. While it can't compete with a regular saloon or hatchback, for a vehicle of this size and carrying capacity it is more than adequate.

The Ram's desirability makes it an obvious target for thieves, but it is fitted as standard with remote central locking and a Thatcham category 1 approved alarm and immobiliser.

Although its size means it is less manoeuvrable than a smaller vehicle, the Ram is well specified with standard ABS, four airbags and selectable four-wheel drive. Its excellent driving position and visibility also contribute to the Ram's safety.

The commanding driving position brings an instant advantage to the Ram driver, allowing them to anticipate the traffic ahead. The controls are light and easy to use, while the engine is a delight. The automatic gearbox shifts easily, and there is remarkable acceleration on offer. Bumps are dealt with comfortably, though the size does mean that a series of undulations will rock the body a little.

The Ram could perform the family role very well, with enough seats to cope with a big family. The only drawback would be the lack of a proper boot, although the load area could be secured with a cover.

The Ram is simply unsuitable as a first car. The size, the expense and the left-hand drive configuration would make it too intimidating for an inexperienced driver.

The quality of the Ram is good, considering that it is somewhere between a utility and a leisure vehicle it does not feel sparse or utilitarian inside. While less sophisticated than a conventional car it has enough luxury features to feel comfortable. The Ram's image is one of the key reasons for buying it: its sheer size and butch styling means it turns heads on any high street.

Shorter passengers may actually struggle to get into the Ram such is its height, but the size of the doors and the apertures makes it easy to gain entry. Although it does not have a boot as such, the tailgate flips down easily for access to the load area.

A standard radio/CD with four speakers is more than adequate for the Ram, and audio controls on the steering wheel means the driver does not have to reach the long distance to the centre console. The sound reproduction is also good, with quality Infinity-brand speakers fitted.

Inside the Ram comes with leather trim on the seats and steering wheel, and although the rest of the cabin is finished in simple plastics, the large glass area allows plenty of light in giving the cabin a nice feel.

Given a parking space big enough the Ram is easy to park, thanks to the superb visibility and automatic transmission. However, in a more confined space it is a real handful, suffering from its size and turning circle. It also lacks parking sensors, which would be a big help.

Two engine options: 5.7-litre petrol (375bhp); 8.3-litre petrol (500bhp). Both are mated to an automatic transmission, with five speeds in the Laramie and four speeds in the SRT-10. Trim levels are engine dependent, with the SRT-10 gaining individual powered seats instead of bench seats, plus added exterior styling and bigger alloy wheels.