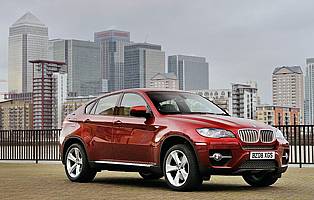 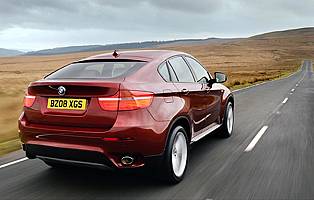 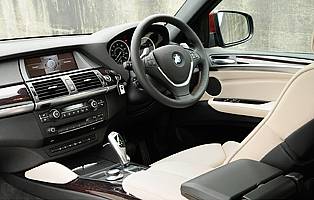 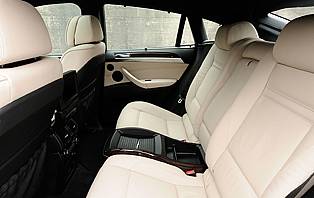 Already responsible for a dramatic change in the SUV market thanks to the X5, BMW are aiming to set another new trend with the introduction of the X6. Billed as a coupe version of the X5, it aims to deliver the desirable SUV attributes of a high driving position and space with sports-car like handling and a more rakish design than its bigger sibling.

BMW claims that the X6 is the next step in offering a coupe version of its core models, following the trend set by the 1-Series and 3-series coupes. It is, however, something of a mould-breaker and the first car to attempt to combine the attributes of an SUV and a sports coupe. It is also intended as a high premium product, selling fewer numbers than the X5 and to a smaller target audience.

For most buyers the key factor will be the X6's unusual styling. It can briefly be described as a car of two halves - the bottom half has the rugged stance and ride height of an SUV, whereas the glass area and sloping rear are far more coupe-like. Whether or not the two successfully blend is a matter of personal taste, but the X6 grabs the attention like little else, and has a presence deserving of its price tag.

Underneath the skin, the X6 is based upon the well proven technology seen elsewhere in the BMW 4x4 range. The xDrive system is an automatic four-wheel drive system that works in conjunction with the dynamic stability control to ensure the power is delivered efficiently to all four wheels, and to maximise grip. A feature unique to the X6 is the Dynamic Performance Control rear differential, which claims to distribute power more effectively between the rear wheels for improved handling and traction.

Although similar in size to the X5, the X6 is a strict four-seater, confirming its status as a coupe-SUV. The rear seats are split into two individual chairs, preventing a fifth person from being carried, and a large centre console with storage is installed in its place. The steep slope of the rear window does little to hamper the amount of space on offer, and the X6 still performs well in terms of carrying passengers.

Our verdict on the BMW X6 xDrive35d

The X6 is unashamedly a niche product, aimed at well-heeled buyers who are looking for a specific set of attributes, and on that score the X6 is impressive. Compared to rivals that fit more easily into the SUV template, the X6 has advantages in performance and efficiency. While the styling may not be to all tastes, the same was said about the X5, which has gone on to become one of BMW's best selling models.

While the X6 has a high initial purchase price and insurance ratings, the diesel versions offer impressive fuel economy and will contribute to running costs somewhat lower than direct rivals.

Although a little smaller than the comparable X5, the X6 does not lose out in terms of space. All occupants have generous head and legroom, even with the front seats pushed back. The same can be said for the boot, which can offer an impressive 570 litres with the rear seats up. There is also good storage space in the cabin, although the glovebox is relatively small.

The layout of the X6 is excellent, combining the familiar BMW themes of good quality and logical layout. The much-maligned iDrive controller may confuse those new to it, but a little familiarisation goes a long way to understanding its usefulness in operating a well-specified car such as this.

The X6 is just as happy to cosset its occupants, cruising with ease and undisturbed by any significant wind or road noise. It can eat up large distances with very little effort and the space on offer means all occupants can relax.

An approved alarm and immobiliser system with remote central locking is fitted as standard to all X6 models, with the option of keyless operation to further increase security.

A high level of safety as standard is provided by the X6. As well as its excellent dynamics for a car of this size, it comes packed with safety equipment including airbags and a comprehensive stability control system. The added benefits of four-wheel drive also contribute to the safety levels.

The X6 is designed to appeal to an enthusiastic driver who also wants SUV-like space and style, and considering the difficulty in achieving such a combination, the end result is especially impressive. From the driver's seat the high seating position gives a superb view out, yet the car responds to driver inputs in a way that would not disgrace a sports car. Even the diesel engines respond rapidly, delivering impressive acceleration, while the steering and ride quality are first rate. Despite its bulk, the X6 never feels top heavy or unbalanced and it can be driven through a demanding sequence of bends with ease.

The X6 would make a good family vehicle, offering the kind of space and practicality demanded by family buyers. One downside is the lack of a bench-style rear seat, preventing a fifth occupant from being carried.

The X6 is too large and expensive a car to be viable for new drivers. Although it is an easy car to drive, the performance on offer and the high insurance groupings will put it out of reach.

The X6 exudes quality throughout, with the immaculate exterior finish and the high standard of materials used throughout the cabin. The controls operate with assured smoothness and it feels like a car that would age well. The X6's image is likely to mirror that of the X5's, which is synonymous with desirability and exclusivity.

The ride height of the X6 requires occupants of an average height to climb up slightly, but the doors open sufficiently wide to avoid this being much of an issue. The tailgate is easy to open, but the height of the boot floor does demand a relatively high lift which may be a problem for heavy items.

All models are fitted with a high quality CD/tuner with MP3 compatibility as standard and remote operation via the steering wheel controls. The sound quality is very good, and a range of further enhancements are available to improve the sound reproduction and the range of input devices.

The unusual nature of the X6's shape is quite sensitive to colour choice, with darker hues blending with the black cladding around the sills and lighter colours contrasting. Inside the cabin can be made significantly lighter or darker depending on the choice of fabric hue, with the leather options offering a wider choice of colours.

The X6 is an undeniably large vehicle, but the standard fitment of parking sensors front and rear is a great help in reducing effort. The option of active steering and a reversing camera can aid this still further, but the X6 is no more difficult to park than a similarly sized car.

Range Rover Sport Attractive and classy, but behind on performance