The i8's radical looks are sure to get you noticed 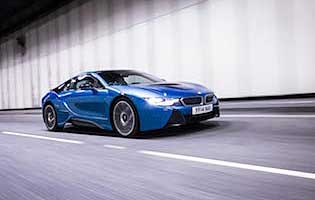 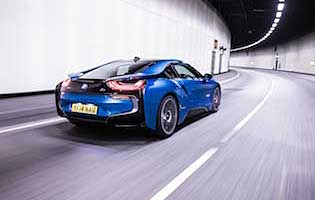 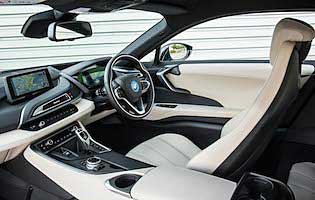 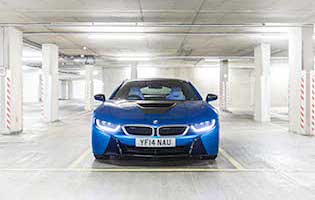 Along with its i3, the i8 is another clear demonstration from BMW that it's serious about electric and hybrid vehicles. And just like the i3, the i8 sports coupe has been styled to turn heads. Yet it's not all for show, as the car packs a serious performance punch.

The carbon composite exterior of the i8 hides a wealth of hybrid power technology. Helping the i8 to reach 62mph in 4.4 seconds is the combination of a 1.5-litre, 228bhp turbo petrol engine plus a 129bhp electric motor. The associated battery pack allows for around 20 miles of electric-only running, and the 'plug-in' nature of the i8 means charging takes only a few hours, not the overnight hassle of pure electric cars.

That's the numbers-driven technology side of the story, but what's the i8 like in the real world? Naturally first impressions centre on the car's looks. It's certainly not a purchase that will attract social wallflowers, so be prepared for plenty of attention. And the car's scissor-style opening doors mean you'll need to be reasonably agile to slide over the wide sills to get in and out.

Once inside you're met by mostly familiar BMW cabin hardware, but the view fore and aft couldn't be more different from your average 3 Series experience. By default the i8 starts off in pure electric mode, which means the motor driving the front wheels. Leave the driving mode in 'auto' and the i8 will activate the petrol engine as and when firm throttle responses require it. This makes for a relaxing, quiet experience when in town.

Prod the throttle or switch to a 'sport' mode and the petrol engine will run continuously, delivering a potent, elastic stream of power, making it ideal for tackling switchback countryside roads. In this environment the i8 is an accomplished all-rounder; its ride and steering responses still err on the side of comfort but, crucially, it won't bite like a track-focused Porsche 911. Factor in the car's absurdly low CO2 (49g/km) and consumption figures (134mpg) plus the ability to pay very little motoring tax of any kind, charge-and-go in just a few hours from flat and the i8 is a genuinely practical and usable petrol-electric hybrid performance car.

Our verdict on the BMW i8 i8

First off, if you don't like the i8's looks it's going to be a non-starter. BMW's decision to throw caution to the wind in design terms should be applauded, though. And the firm's bravery continues with the car's clever composite construction and petrol-electric powertrain. The result is a genuinely impressive performance coupe to rival the 911s and R8s of this world. It might lack the former's detailed driving feedback, but the sacrifice will be small for those willing - and financially able - to embrace the new technology.

Here's where it gets interesting as, looking past the car's considerable price tag, running costs are a fraction of what you'd pay for a similar Porsche 911 or Audi R8. Factor in the ability for electric-only running in town, the i8's congestion charge exempt status and the various VED and business-related tax incentives and it all starts to make sense. Assuming you have access to the cash for the near-six figure asking price.

Modest levels of cabin storage space is a little disappointing for a car offering long range motoring potential. And the nature of the car's layout also dictates that boot space is also modest. With the petrol motor located behind the cabin, the small boot is accessed via a large rear lid. It's a deep but small space, and gets warm due to its close proximity to the petrol engine.

For all the i8's futuristic exterior design, the car's cabin is familiar BMW territory. The switchgear, displays and ergonomics will be familiar even to 1 Series owners. Credit to BMW, the various systems work well and allow the driver to focus on the job in hand without distraction.

For a car focused on delivering driving thrills, the i8 is surprisingly docile at modest speeds. Ride comfort is good and the main controls offer plenty of assistance. Furthermore, noise from outside the cabin is low when running in electric-only mode. And the wide cabin ensures two adults can travel long distances in saloon-like comfort.

There's no getting away from the fact that the i8 is a distinctive shape. It will attract attention so be prepared to talk to curious observers when you're parked up. There are no special add-ons over an above what you'd have on a premium-grade car to boost security, as BMW's standard issue kit is deemed sufficient.

Like the smaller i3, the i8's construction is mostly that of a carbon composite material. The result is a stiff, light yet strong passenger cell. Factor in the airbags and basic safety kit and you're in safe hands. For the keen drivers, it's good to know that the electronic aids aren't too intrusive when you want to have some fun.

With a combined 357 horsepower at your disposal, performance is certainly rapid. That's partly down to the i8's modest weight, but also the responsive nature of the car's powertrain. Petrol power is always directed to the rear wheels, with the electric motor's efforts going to the front. Interestingly this makes the i8 a front-drive car when in electric-only mode. Ride comfort at low speed is good, and remains pleasingly supple at high speeds. The elastic nature of the combined power output contributes towards a rewarding and engaging experience in twisting and flowing country roads. And it's only when in this environment do you wish for more feel and feedback from the steering.

With realistically only two usable seats and a very small boot, the i8 is anything but a family car. Short trips as the second or third car in the family are possible, but transporting bulky baby buggies is out of the question.

You would have to be an extremely confident - and wealthy - individual to justify an i8 at the start of your driving career. It's Porsche 911 quick and, financially, costs a similar sum to purchase. Despite its talents the i8 is hardly the right choice for a novice.

BMW's corporate image is a strong one, and is founded on the twin pillars of driver enjoyment and innovation. The i8 satisfies both these attributes, while exploding the myth that the company is too conservative - witness the car's bold exterior if you're not convinced.

Despite the presence of token rear seats this strictly a two-seater i8 employs doors that open in a scissor-like way. This design trick might look impressive, but if you're short you might struggle to close them once sat low down in the car's cabin. And that low driving position means sliding in and out over high, wide sills - not the most dignified of actions.

For the most part the car's infotainment system is pure BMW, with the predictable additions to display the car's hybrid performance when on the move. The various controls work well, while the large screen makes navigating the sat-nav and audio functions easy. As you'd expect, all the main sources - Bluetooth, USB, DAB - are present.

There's no mistaking the i8 for anything else on the road, which is largely down to the car's dramatic styling and complimentary paint options. Dark colours are best avoided if you want to showcase the i8's many interesting features. The cabin, while mostly familiar BMW design, offers buyers the chance to lighten the ambience with various trim colours and materials.

Sitting low down in the i8, visibility isn't that great - fore and aft. Thankfully the various controls offer plenty of assistance, while the parking sensors do much to take the risk out of low speed manoeuvres. It'll never be as straightforward as it would be in a family hatch, though.

Porsche 911 The default performance car for many; great to drive but petrol only

Audi R8 Another petrol-only performance coupe, but a good one nevertheless

BMW M6 In house rival is a conventional alternative; rapid and practical but thirsty