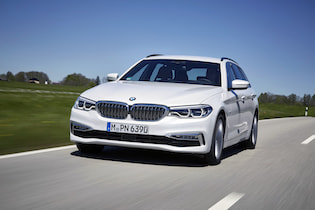 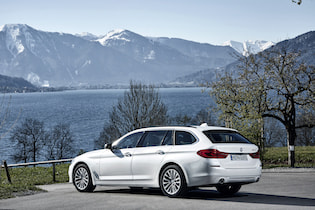 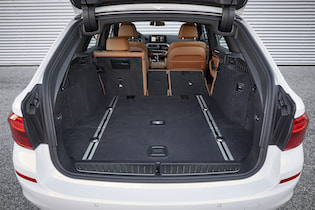 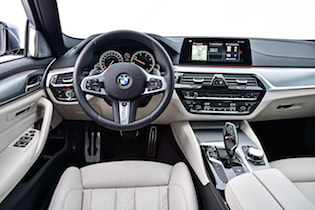 The BMW 5 Series Touring is somewhat of an underground success for the German manufacturer. Immensely popular in Europe it has, throughout its extensive lifespan, given consumers a more practical alternative to the regular 5 Series. Now, there's a new one based on the current generation 5 Series saloon. What does that mean? Better technology levels and more standard equipment, to start with.

Practicality is the name of the game with any estate car and, luckily, the 5 Series Touring ticks all the right boxes here. It has a large boot, plenty of legroom for rear passengers and a good degree of space for those sat up front, too. It manages all this while still looking dynamic and refined - there's no mistaking this for any other make of car.

Inside, the 5 Series Touring benefits from the upmarket interior which first impressed us in the regular 5. That means you get the impressive gesture control system, which gives hands-free access to audio controls – simply wave your hand in front of the dashboard and you can raise the volume, decrease it, or even pause the track, all without touching a button.

Power is still sent to the rear wheels as with traditional BMWs, though there is the option to specify the brand's XDrive all-wheel-drive system, giving the car greater capability in slippery conditions. The most popular engine is likely to be the 2.0-litre diesel-powered 520d, though those after a little more power are well catered for with the larger 530d.

BMW has worked extensively on the 5 Series Touring's ride to ensure it remains just as comfortable as the saloon. To achieve this, it has fitted all cars with rear air suspension as standard, which means that it'll stay level no matter how much is loaded into the boot. Refinement levels have also been kept high, and this means that the Touring is just as well accomplished at crossing continents as it is at moving a weekend's worth of luggage around.

Our verdict on the BMW 5 Series Touring

The 5 Series Touring is pretty much all the car you could ever want. It's practical, refined and, when fitted with the 2.0-litre diesel, efficient too. Some may be put off by its sheer size – the Touring is by no means a compact car – but it is because of this that it is quite so accomplished at load lugging. Prices start at £38,385, which makes it somewhat of a steal, too. It would appear that the age of the estate car is still firmly going.

Running costs for the 5 Series Touring shouldn't be too high, especially if you pick one of the diesel engines which return the best economy figures in the range. Servicing costs shouldn't be too high, though it's worth remembering that consumable replacement prices – those for brakes and tyres, for instance – will be higher than in more budget cars, especially if you choose the larger-wheeled M-Sport specification.

As you'd imagine of a car of this size, there's plenty of space and practicality on offer. There's 570 litres of seats-up boot space to be had, rising to an impressive 1,700 litres with them folded flat. This represents a rise on the previous-generation car – the former figure is 10 litres more than the older car, and the latter 30 litres greater. It's a square load area too, making it ideal for larger items such as suitcases.

As mentioned earlier, the 5 Series Touring's controls are impressively well-judged, both in their positioning and weighting. The infotainment system is equally good, with functions such as satellite navigation easy to locate and operate. The rotary controller that we've seen in all modern BMWs features here too, and is easy to get up to speed with.

If it's comfort you're after, then the SE-spec car is the one you'll want to choose. It offers the softer suspension setup when compared to M-Sport cars, and this is worth remembering if ride quality is high up on your list of priorities. That's not to say that the M-Sport is unbearably hard-riding, it's just not quite as cosseting as the softer SE. Both cars are still immensely comfortable, however, and are ideal if you're planning on travelling long distances.

As with any modern car, the 5 Series Touring comes with a full alarm and immobiliser as well as remote central locking. As previously mentioned, it's not a flashy car, which should mean that it doesn't draw too many eyes towards it and therefore remain less of a target for potential thieves.

Safety has always been paramount in large BMWs, and the 5 Series Touring is no different. It comes with a full suite of airbags, as well as traditional safety systems such as anti-lock brakes and dynamic stability control. Driving Assistant Plus, an optional pack, brings with it lane change assistance and lane keeping assistant, with both utilising semi-autonomous technology to manage both the throttle and steering for the driver.

Despite being an estate and therefore rooted in practicality, the 5 Series Touring is still an excellent car to drive. It remains planted throughout tighter corners, and exhibits a surprising lack of body roll despite its size and weight. The steering is well-judged and has a good degree of weight to it, while the 2.0-litre diesel engine fitted to our test car had more than enough grunt for everyday driving.

The 5 Series Touring is a near-perfect family car. It's practical, spacious and robust too – all the things you need in a daily family vehicle. Its interior feels as though it'll take all manner of daily abuse, while the rear seats will give children a good view of the outside world. A host of standard safety features will make the 5 Series Touring even more appealing to family buyers, too

Because of its relatively large engines and reasonably high cost, the 5 Series Touing won't be best suited to first-time drivers. It could be quite an intimidating car for those drivers who are more used to being behind the wheel of smaller cars, too. Insurance costs for just-passed motorists will be high, while the price of tyres and brakes will be far higher than you'd expect for a usual first car.

BMW appears to be knocking it out of the park in terms of quality of late. The 5 Series Touring is no different, with every part of the cabin feeling of a premium quality. That said, you'd expect this of a car priced from £38,000 and over. It's also got that all-important badge appeal that buyers in this segment are looking for, yet it manages to remain understated and never flashy.

With large doors and wide opening apertures, the 5 Series Touring is a very easy car to get in and out of. The seat squabs aren't too wide either, and this means that sliding into the cabin is never difficult. The powered boot lid is a breeze to use, and in typical Touring fashion has a split glass partition, giving an added level of flexibility to the luggage area.

The 5 Series Touring benefits from BMW's latest infotainment system, accessed via a large, clear 10.25-inch colour touchscreen. This gives access to media functions, satellite navigation and smartphone connectivity options. It's a polished system, and one which is simple to operate. The controls for the heating and ventilation are equally as easy to use, and all this makes for an instantly intuitive cabin. There will be few people who won't be able to understand how to use the Touring's controls quickly.

As with any BMW, there's a wealth of colour options to choose from. However, there are just two specification levels to pick – SE or M-Sport. The former receives 17-inch alloy wheels, LED headlights and air conditioning as standard, as well as front and rear parking sensors – a must for a car of this size. M-Sport cars add to this with a full sports bodykit and lowered suspension, alongside larger alloy wheels.

As mentioned earlier, all Tourings come with front and rear parking sensors as standard, and this is a real bonus given the car's size. It's now well over 1,630mm in width and 2,975 in length, making for a vehicle which isn't the easiest to position. However, thanks to wide mirrors and plenty of all-round visibility it's not as a bad as you'd think – though the car's size is something well worth keeping in mind if you're upgrading from a smaller car.